100 jobs will be lost with two-year Fairfield Halls closure

The battle for Croydon’s cultural future took a twist at the Town Hall last night, with local Tories arguing against job cuts and wanting to spend more public money on the borough’s flagship arts facility, as STEVEN DOWNES reports

Croydon’s Labour-run council’s plan to close the Fairfield Halls for two years in a £32-million refurbishment will see more than 100 people lose their jobs, with no redeployment or re-employment planned for them before the arts centre is due to re-open in 2018. If it ever re-opens.

The Fairfield Halls, with College Green to the left of the picture, is about to be changed forever

Last night’s meeting of the council cabinet saw genuine fears aired that there is a risk that the world-renowned Fairfield Halls may never re-open.

Yet extraordinarily, according to the council officials’ report submitted to cabinet on the “College Green Cultural and Educational Quarter” (Croydon now has more quarters than a Manhattan phone booth), “There are no human resources implications from this report”.

It was left to the Tory opposition at Croydon Town Hall to raise the issue of the 100-plus employees who work at Fairfield Halls.

It is understood that the Halls’ paid staff includes nine Croydon Council employees, their contracts with the Town Hall a hangover from the time when the council not only owned the arts centre but operated it as well.

The consequences of the closure of the Fairfield Halls could cause serious impact to the borough’s brittle economy, too: Fairfield Halls is at present a £4.8 million-a-year turnover business. Croydon’s Labour-run council’s proposals will see that activity taken out of the local economy, and all to be done at the same time that Westfield and Hammerson will have closed the Whitgift shopping centre for its £1 billion overhaul.

Last night, with Jo Negrini, the council’s six-figure salaried director in charge of the project absent for the presentation of her report on what is probably the biggest council-run part of the town centre’s redevelopment, it was left to Councillor Alison Butler, Labour’s deputy leader, to talk the meeting through it, promising, “A scheme of national architectural significance”.

Butler provided some of the detail that was lacking from the announcement made earlier this month.

“This is a fantastic opportunity,” said Frances Wadsworth, the chief executive of Croydon College, who is clearly on-message when it comes to the scheme.

It was all beginning to sound like an episode from Reggie Perrin. “Great!” “Smashing!” “Super!” CJ would be so pleased.

But pointedly, there was no one from the Fairfield Halls management or its board present at then meeting to speak in favour of the scheme. That might just be because they are not.

It emerged, much though council leader Newman tried to swerve it, that Simon Thomsett, the chief executive of the Halls, has written to all members of the cabinet to express his very serious reservations about the plans and the future of the Halls.

“There’s no budget for the Halls artistic programme for when it re-opens,” one source told Inside Croydon. “So either the council’s incompetent, or there’s a hidden agenda, and they want to hand it over to a private arts centre operator.”

A phased redevelopment, over a longer period, which would allow the venue to continue to operate in some form is favoured by the Fairfield Halls board. Complete closure is the cheaper option.

According to Butler, if planning consent is granted next March, construction work will begin in the summer of 2016, with the Fairfield Halls, including the concert hall, Ashcroft Theatre and Arnhem Gallery, all shut for business until some time in 2018. Other council sources suggest that even if all the preparatory work for a planning application is ready by March, it could be another five months before building work can start.

That means no Croydon pantomime in 2016 or 2017, though at least although the troupers in the Town Hall chamber continue to do their best to provide an alternative.

To pay for the scheme, the council wants to use land owned by the college and play at being property speculators – just as the previous Tory administration tried so unsuccessfully with the CCURV – the Croydon urban regeneration vehicle.

Tim Pollard, the leader of Croydon Conservatives, reminded the Labour leader of how not so long ago he had opposed such casino economics, and speculating with public money: “He described the URV as ‘putting all our money on red’,” Pollard said.

“And here he is doing exactly the same thing.”

The hard details of the project were not made public last night, but were included within the secret “Part B” agenda restricted to those at the meeting. Pollard, who has seen the Part B, suggests that it looks as if it was drawn up “on the back of a fag packet”.

Under gentle pressing from Pollard, Newman conceded that a hitherto secret report from development consultants Mott MacDonald “will be made public”. Nathan Elvery, the council chief executive whose entire career has relied on keeping details of public deals secret, visibly squirmed as his political boss announced this off-the-cuff executive decision.

The council scheme will see “hundreds” of flats built on or around College Green. With the council having announced last year that it had £12 million available for the project, it seems that the resultant property sales will need to raise more than £20 million towards the scheme’s overall cost. Thank goodness for that property bubble, eh?

“The Council is in the process of working up a hybrid planning application for a mixed use scheme for this area,” the report states. “This scheme will deliver, across a number of phases, innovative cultural and educational facilities alongside major residential and commercial development, as well as significant landscaping, public realm and public art elements.” 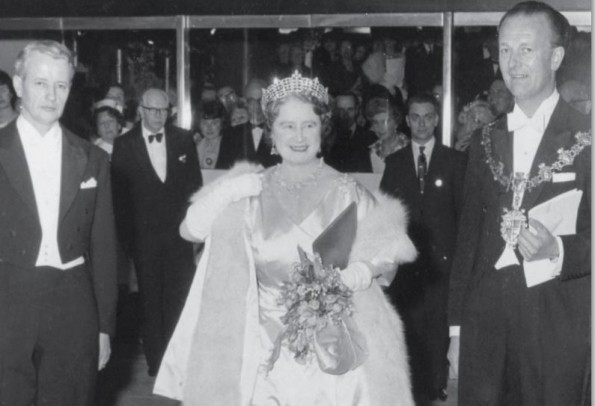 The Queen Mum, gawd bless her, making for the Fairfield Halls bar for a large G&T on the night in November 1962 when she officially opened the Halls. They’ve barely changed the carpets since

How this will all stack up against Westfield’s “major residential and commercial development”, which is about to go ahead just across the Wellesley Road remains to be seen. There must, though, soon come a time when central Croydon will reach saturation point for over-priced Yuppie rabbit hutches.

Thing is, and this was a point agreed by both sides of the council chamber last night, Something Must Be Done with the Fairfield Halls, or the place will just crumble and die.

The previous Labour council had plans for refurbishment 10 years ago which were never implemented. The Tories, after taking control of the Town Hall in 2006, inherited those plans and did… not much. The venue, which opened in 1962, had its last major refurbishment in 1986. More recent spending has gone on new boilers, wiring and hydraulic systems, essential to keep the place operating, but largely unseen and unappreciated by the public.

What Croydon’s Labour council is proposing now is, politically, very brave. Or foolhardy.

They will shoulder all of the costs of the essential refurbishment, and the political and economic pain that will go with the Halls’ closure, while reaping no immediate benefits. Newman and his loyal team could all be out on their ears in May 2018, months before Fairfield’s grand re-opening, potentially for generations of Croydon residents to continue to enjoy.

Thing is, neither Newman nor any of his top team had the wit to say as much when they had an opportunity to do so last night.

Dudley Mead: fears the Fairfield Halls will not re-open

Stuart Collins, Newman’s other deputy (has anyone ever asked why he needs two deputies?), probably got closest when he made an emotional and passionate speech, channeling his inner Morgan Freeman when he quoted a line from Shawshank, “Fear can hold you prisoner. Hope can set you free”.

Perhaps Collins could get some T-shirts made up?

Collins called on the Tory opposition to embrace the plans in the greater interests of Croydon. “Fairfield’s on its knees,” Collins said. “It will be quicker and better in the long run to get it sorted. Be with us on this one. Don’t make it a politics issue and stop being so down on it.” Collins pleaded with the Tory front bench not to make it an election issue. Like that’s going to happen as long as Phil Thomas has breath in his body…

But the concern that, once closed, it will become impossible to re-open the Fairfield Halls remain. Councillor Dudley Mead, who until he was bounced off the board of trustees in May had an association with the Fairfield Halls going back 34 years, is reputed to have told friends that he has “a real fear that if it closes, it may not open again”.

Another source close to the Fairfield board also expressed disquiet. “In the past few years, this town has already lost the David Lean as a full-time, professionally run cinema, the Warehouse Theatre has closed, they flogged off the Riesco collection and now they’re going to close the Fairfields.

“It’s all very well handing out cheap business awards to galleries that set-up in shops that no one wants to rent, but if we’re not careful, Croydon will be left a cultural wasteland. The council officers have got to do the detailed work on this properly.”

Three times at last night’s council meeting Mead, an accountant by profession, asked Newman what budget there was for the running of the Halls’ artistic programme from its re-opening. He never got an answer. All Newman could do was make ridiculous over-statements that, “The Fairfield Halls will rival the South Bank Centre.” Yeah. Right.

“You want to close it because of cheaper building costs,” Mead told the meeting. “But you have something there which has a turnover of more than £4 million per annum – and that takes some building up again after closure for two years. How are you going to do that?”

The people of Croydon, like Dudley Mead, have been left waiting for an answer to that key question.