Residents and shoppers are angry, and some are considerably out-of-pocket, after some endured a wait of three hours just to get out of the car park at Valley Park’s shopping and leisure centre yesterday. 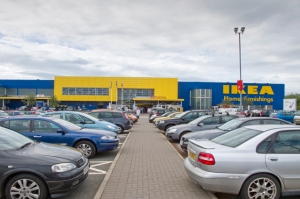 No escape? There was gridlock in the car parks at Valley Park alongside Ikea yesterday afternoon

It was the first post-Christmas holiday Saturday of sales and discounts in the shopping complex off the Purley Way, and the combination of the unusually high volume of traffic, some drivers’ impatience, and lack of any help or direction from the centre’s staff contributed to the traffic chaos.

“Total joke. I was stuck for two hours,” one frustrated shopper said.

Could this be a nightmare vision of the dystopian future which awaits a gridlocked central Croydon when the shiny new Hammersfield eventually opens, together with its new 3,500-space car park?

Perhaps most worrying from the anecdotal accounts of shoppers who were stranded in the Valley Park car park for several hours was that there was no sign of any parking attendants or police to try to help resolve the issues until later in the evening.

“I was trapped in the car park for two hours,” Donna Johnson said. “Where was the traffic police? No emergency vehicle could get in.”

Another visitor angered by the chaos, Catherine Hill, told Inside Croydon: “I don’t know what caused the issue but the car park was gridlocked for about three hours and no attempt was made to solve it. More and more cars were coming in so the situation just worsened, which was why I gave up and went to Star Wars.

“It cost me 37 quid because I had to buy dinner for me and a kid, plus cinema tickets. Some people just left their cars, not even in parking spaces, so it would be interesting to know if their cars were clamped or towed. There was a parking attendant around at 10pm, but no one between 4.30 and 7pm. I will not drive up there again when I can get the bus into Croydon and go to Grants.” 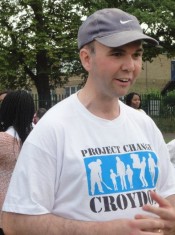 Gavin Barwell, the Tory MP for Croydon Central, has today responded to complaints by promising to take the matter up with the council, and explore the possibility of developing a second exit from the complex.

“Has happened to me in past,” Barwell announced on Twitter. “Have raised with council before and will do so again.”

Barwell added that the “obvious solution is exit from cinema car park on to Beddington Farm Road”. This may involve planning applications to Sutton Council.

“We must get Westfield planning spot on,” they added, perhaps more in hope than expectation. Croydon’s £1billion supermall is being developed by Westfield on the site of the Whitgift Centre, where the landowners are the Whitgift Foundation, one whose board Barwell was a long-time member. He continues to be cheerleader-in-chief for the project.

Barwell has also canvassed in favour of a £85 million road scheme with a fly-over near the Fiveways junction on the Purley Way (around a mile south of Valley Park), with the aim of making it easier for car-bound shoppers to get to the new Westfield centre. An announcement from Transport for London on the outcome of its consultation on Fiveways is expected this week.