Sausage and mash comes with ‘jus’ in this Triangle of pubs

Posted on February 12, 2020 by insidecroydon

Crystal Palace Triangle is thriving with pubs, but it has only two types of pub, as KEN TOWL explains.
Photographs: SIMON BENTLEY 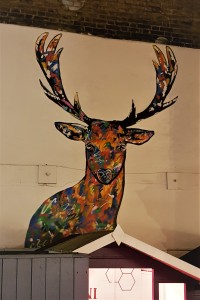 “You should write a piece on the pubs in the north of the borough,” said the senior local Labour figure to me back in December, as we knocked on doors trying to identify the voters who would support Sarah Jones in the General Election.

“Crystal Palace has some excellent pubs,” they added.

“They” shall remain unnamed – Labour councillors have been ordered not to talk to Inside Croydon – but I was grateful for such a heads up and, finding a rare window in my busy diary, headed up to the Crystal Palace Triangle to sample the beer, the decor and the ambience.

The Crystal Palace Triangle is made up of three streets about 300 yards long that sit atop the Norwood Ridge on one of the highest points in Greater London, hence the proximity of the Crystal Palace television transmitting tower and views over the city to the north and the Downs to the south. Westow Hill runs along its north side, Westow Street its south-west face and Church Street connects them both.

The Alma, a traditional name from the Victorian era, for quite a modern pub, where they have a ‘beer menu’ and a pint will cost you £6.25

You can get there easily, a 410 bus will take you straight there from East Croydon, or you could travel by train from West Croydon to experience the height of Victorian grandeur that is Crystal Palace Station. It was built to accommodate passengers arriving for the Crystal Palace itself, which had been transported there after the Great Exhibition of 1851 in Hyde Park, as any fule kno.

Crystal Palace appears to have kept up its aspirational heritage, if its pubs are anything to go by. And pubs – like supermarkets and elections – are usually a very good indicator of a neighbourhood’s changing demographic. 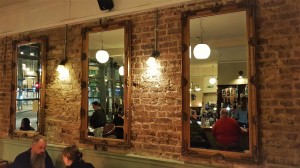 The mirrors in The Alma, so the beautiful people can check

There are many pubs on the Triangle, but only two types of pub.

The first type is represented by The Alma and The White Hart at the southern tip, and Westow House at the eastern point. The clients are good-looking and the bricks are exposed. Mirrors are plentiful (presumably so that clients can easily monitor just how good-looking they are). The furniture is antique-chic and the menus – for there must be menus – are full of useful ideas for disposing of surplus wealth.

The Alma is an attractive enough venue, though, a couple of Victorian shops knocked together, light, airy and when you fancy something different (or as it turns out, similar) there is the White Hart just over the road. At the White Hart, the cured meats (£14.50) are “Calabrian”, the pork belly (£15) is “sticky” and the sausage and mash comes with a red “jus” for jus’ £12. As at The Alma, for someone’s convenience, all prices are rounded up (or, to be generous, down) to the nearest 50p.

It doesn’t look like anyone is quibbling. I didn’t try the food but I have to concede that the sight and the smell of the dishes coming out of the kitchen almost made me want to.

After my drinking partner Simon had taken a photo of the multi-coloured hart on the outside wall of the White Hart, we headed up Westow Street and found The Sparrowhawk on the corner with Westow Hill.

It looked like something in between The Alma and the White Hart. The pub self-identifies as a “chic setting” for “refined pub dining”, so there was probably something sticky on the menu. There were certainly exposed bricks.

We carried on along Westow Hill, passing the Faber Fox (even more exposed brick and a menu boasting a sourdough loaf served with oil, balsamic, confit garlic, thyme and olives for “£5.5”). Sick of bricks and aspirational pub gastronomy, we crossed the road to No28, the Craft & Courage, one of these new-fangled micro-pubs where decor is not a thing and the beer is made in small batches and served by a friendly man with more than his share of facial hair.

The Craft & Courage has been crafted out of a single shop front and feels a little cramped, despite the fact that when Simon and I arrived we doubled its number of customers. Much of the space is taken by a huge range of bottled beers.

Westow House is an Antic pub, and so serves up a reliable, Croydon-brewed ale and a certain style of decor

The draft beer that I had was very good, full of that fresh taste associated with small batch beers. My bank account was debited £10.80 for two pints in the Craft bar. A gem, and something a bit different for the Triangle.

At the eastern end of Westow Hill, we had a look inside Westow House, an Antic pub (like the Shelverdine Goathouse in up-and-coming South Norwood) and so serves the excellent Croydon-brewed Volden range of beers, and a pint comes in for less than £4.

Westow House had a bit of a buzz for a weeknight and a decor that leans more towards the eccentric than the shabby-chic irony of most of its neighbours.

If you fancy a change this weekend, jump on a 410 and head on up to the Triangle. You never know, you might meet a Labour councillor who has stopped for a drink before being sent to Coventry.