Posted on February 13, 2020 by insidecroydon

A day early, Croydon has suffered a Valentine’s Day massacre, as the French owners of Westfield announced a multi-billion reshaping of their investment plans – with their Croydon project described as a “£1.5billion dead duckling”.

And it seems Croydon Council has been expecting the worst, as for the first time in a decade there will be no delegation from the Town Hall heading off to the South of France next month for MIPIM, the global property developers’ conference, piss-up and hookerfest.

It is exactly one year since Westfield announced that they were to “review” their plans for the regeneration of Croydon’s two shopping centres, the ageing Whitgift Centre and the Hammerson-owned Centrale.

Today’s latest update came in the form of a gloomy annual report from parent company Unibail-Rodamco-Westfield.

Trade publications reported that URW is to “scale back its development pipeline”, following another grim year for the retail sector. Rental income from Westfield’s UK shopping malls – including Stratford and Shepherds Bush – was down by 4.2 per cent in the last trading year.

Estates Gazette reported that URW “has reduced its total development pipeline to €8.3billion (£7billion), down from €11.9billion at the end of 2018.

“It has removed €3.2billion of projects that require major redefinition, are significantly postponed due to market or administrative circumstances, or no longer meet the group’s return requirements’.” It is a description that fits Croydon very well. 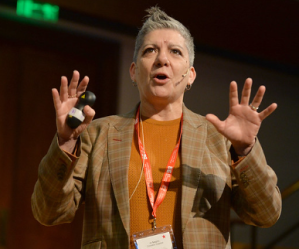 Jo Negrini: time for her Plan B

Peter Bill is a veteran property journalist, a former editor of Estates Gazette and an Evening Standard columnist. He knows how the property business operates. It was he who two years ago collared Jo Negrini, the chief executive of Croydon Council, following some grandstanding speech and asked her whether the local authority had any Plan B in case – as looked likely at that time – that Westfield would pull the plug on its dalliance with Croydon.

Today, Bill indulged in a bit of I-told-you-so when he tweeted his reaction to the URW annual report. Quoting Estates Gazette, he noted: “‘It has removed €3.2billion of projects that require major redefinition’. ‘URW did not specify whether this included its development in Croydon’. [Joint venture] partner Hammerson don’t like you to mention Croydon either.

“Both are incubating a £1.5billion dead duckling.”

The Westfield-Hammerson marriage of convenience in Croydon was conducted at a ceremony in January 2013 presided over by Boris Johnson, then merely the Mayor of London, accompanied by his Tory chum, and then MP for the Whitgift Foundation, Gavin Barwell. Demolition work, already long-delayed, was finally supposed to have begun last autumn. After nearly a decade of development blight in the town centre, now the long-promised shopping palace may never materialise at all.

With observers in the industry and the City drawing the obvious conclusions, Westfield’s press office had to get busy, and they confirmed that Bill’s shrewd assessment is correct.

“URW has… confirmed this includes its development in Croydon,” Estates Gazette reported, adding, “However, The Croydon Partnership – the joint venture between URW and Hammerson behind the scheme – has reiterated that it remains ‘confident in Croydon as a destination and its potential for mixed-use development’.”

“The Croydon Partnership is working on a comprehensive review of the Croydon development to respond to the rapidly changing UK market,” a spokesperson for Hammersfield smarmed this afternoon.

“As part of this review, we are focused on right-sizing the retail and introducing additional uses including a hotel and offices, alongside residential, and are looking at opportunities to reuse some of the existing buildings to ensure a more sustainable development.

“During this phase of the review, we are also working with the council and local stakeholders on the scheme and to ensure the town centre remains active.”

The Whitgift Centre is a slowly decaying, little-visited shell of its former glories

The “local shareholders” means the Whitgift Foundation, the private school-operators who own the Whitgift Centre. They have been feeling the squeeze over the past eight years, with reducing income from rents as the office space above the Centre has been long-vacated in anticipation of redevelopment, and their increasingly run-down shopping centre has slowly emptied of store operators.

Today’s announcement is potentially a huge setback for the area’s biggest charity, though despite repeated requests for a comment, Martin Corney, the Foundation’s chief exec, failed to respond.

Westfield’s partners in Croydon, Hammerson, who operate some of this country’s largest shopping centres, have also delivered some troubling figures recently – the sort of numbers which suggest that shopping centres would be a good business to get out of. 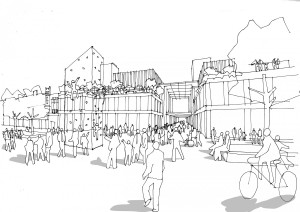 Today, Hammerson sold its majority stake in a Paris shopping complex for £362million, saying that the disposal will be “used to reduce debt and strengthen the balance sheet”. The sale comes a month after Hammerson sold the St Oswald’s Retail Park in Gloucester to the local council for £54million.

Hammerson has seen its share value slide by 21.7per cent over the past 12 months, making a £319.8million loss in the half-year to June 30.

It all seems to suggest that Croydon’s Negrini, who without any modesty describes herself as a “regeneration practitioner”, has no need to fly off to Cannes for a bit of springtime Mediterranean sun with the oligarchs, property speculators and billionaire tycoons who attend the annual MIPIM conference.

MIPIM was once described by Tony Newman, the Labour council leader in Croydon, as “a junket”, but that never saw him putting an end to local authority employees traipsing off to the South of France once he took control of the Town Hall six years ago.

Negrini, and three or four of her closest council colleagues, have been regular attenders at MIPIM, apparently extolling the attractions of Croydon’s Westfield future, usually at a cost of tens of thousands of pounds of Council Tax-payers’ cash.

But a Freedom of Information Act request by Inside Croydon has revealed that there is to be no council delegation attending MIPIM in 2020. Which should, at least, give Negrini more time in her office in Fisher’s Folly to try to extricate herself from the mess she has created around Brick by Brick…