Posted on December 17, 2012 by insidecroydon

Yet another example of the lack of joined-up policy from the Conservative group that is “running” (we use the word in the loosest possible sense) Croydon Council. 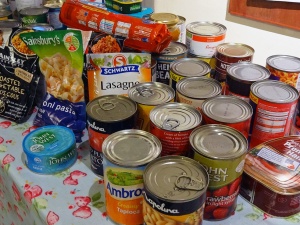 The administration which oversees a plainly illegal provision of emergency accommodation for the homeless and which callously evicts single mothers with young children from such sub-standard rooms, has also voted through even deeper cuts to benefits for the poor.

Even for those in work, poverty is such a biting issue in the run-up to Christmas that food banks – the 2012 equivalent of the soup kitchens of the Great Depression – have been created around the borough.

And the jolly Tories on the council, each of whom collect at least £11,000 of public money in “allowances” each year for turning up for a few meetings and vote along party lines, are now so concerned that they have decided to help out with a few cans of food – all as part of a special Christmas competition being run by Croydon’s “caring” council.

Having done much to create the conditions for poverty in the borough, there is something crassly distasteful about the notion of staging a competition between each floor at Taberner House to see which can donate the most food, aiming to feed families of four over the 12 days of Christmas. And that is surely compounded when the part-time politicians who refuse to be accountable merrily join in.

It is like kicking someone in the nuts, and then handing them half an asprin for the pain.

Terry Lenton, the councillor for Coulsdon East and the Conservative group whip, sent out the following email earlier this month:

You can give to those in need this Christmas by donating food to the Croydon Food Network. As you heard at the Council meeting, there is a competition for staff to give food; this competition has now been extended to include Members. The challenge is to provide enough food to feed a family of four over the twelve days of Christmas. Pease [sic] put your food donations in the trolley in the Members room.

Thank you for your help,

Yes. Thanks so very much.

News, views and analysis about the people of Croydon, their lives and political times in the diverse and most-populated borough in London. Based in Croydon and edited by Steven Downes. To contact us, please email inside.croydon@btinternet.com
View all posts by insidecroydon →
This entry was posted in Charity, Church and religions, Terry Lenton and tagged Christmas, Conservative, Coulsdon East, Croydon, Croydon Council, London, London Borough of Croydon, Taberner House. Bookmark the permalink.