Posted on March 1, 2014 by insidecroydon

As predicted by Inside Croydon, Croydon Conservatives last night dumped Eddy Arram, a local councillor for more than 30 years, when they selected their candidates to stand in Ashburton ward in the local elections in May. 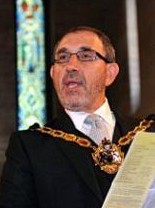 And the Tories are not even attempting to dress-up Arram’s deselection as some sort of retirement for the man who held the honorary office of Mayor of Croydon as recently as last April.

As well as discarding the benefits of Arram’s incumbency, the councillor’s deselection is significant because he is a trusted aide to the local Tory MP, Gavin Barwell.

It was Croydon Central MP Barwell who underlined the ruthlessness of the deed last night, when he took to Twitter to confirm the deselection of his constituency worker: “…Commiserations to my friend Eddy Arram who has served the ward well for 32 years. Politics can be tough sometimes”. There is little chance of that being portrayed as a description of Arram choosing to stand down.

Ashburton Tories have chosen Councillor Adam Kellett, plus Gareth Streeter, who works in PR for the Oasis religious charity based in Waterloo, together with Sylvia MacDonald to stand for office. Avril Slipper, who has been a ward councillor since 1990, is retiring from the role and did not seek selection.

How much “grassroots democracy” was involved in the Tory selection process, you can decide for yourself: it had all the appearance of a foregone conclusion when the Conservatives were distributing leaflets featuring photographs of Kellett and the two new candidates in the month before party members got to vote at the selection meeting.

Arram was first elected to Croydon Town Hall on May 21 1981 in a ward by-election; thus, the day before the 2014 local elections will mark his 33rd anniversary – and his final day – as a borough councillor.

It is clear that there is little place for sentiment among the local Conservatives: four months ago, when their leader of the council, Mike Fisher, sought selection as their candidate for the ultra-safe Croydon South parliamentary seat, he was left more florid-faced than usual when a clique of his own councillors, including senior cabinet member Phil Thomas, refused to pick him.

If a little overdue, Arram’s deselection is undoubtedly because Barwell’s office gofer made himself spectacularly unpopular during his year as a boorish, pompous and partisan Croydon Mayor. Arram’s behaviour in the council chamber was described as “the most outrageous and contemptible thing I have ever witnessed in 15 years of attending council meetings”. And that description came from a member of the Croydon Conservatives.

The year when the chain of office was around Arram’s neck began badly, with the Mayor cancelling the annual civic service at Croydon Minster. It was suggested that Arram, as Mayor, was too busy to attend this fixture in the mayoral calendar. His conduct when he was supposed to be an impartial chairman of council meetings drew official complaints from the Labour group, prompted a mass walk-out from the Town Hall chamber, and even attracted derision from members of his own party who despaired over his partisan conduct.

Now, with only one incumbent councillor opposing them in Ashburton, Labour will see their chances of success in this Croydon Central ward as improved: Arram polled significantly more votes than any other candidate in 2010, while Kellett was elected with just 600 votes more than the top-polling Labour candidate.

Inside Croydon: Croydon’s only independent news source, based in the heart of the borough: 516,649 page views (Jan-Dec 2013)

If you have a news story about life in or around Croydon, a residents’ or business association or local event, please email us with full details at inside.croydon@btinternet.com