What appears to be a UKIP-led campaign against 20mph speed limits on residential streets in the north of the borough has been condemned, after stickers and posters have been placed – often unlawfully – around Croydon. 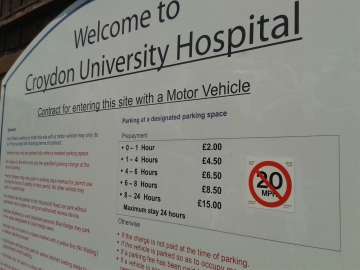 Tasteless: the UKIP-led anti-20mph zone campaigners have plastered their stickers across the borough, including in the car park at Mayday Hospital

In a display of bad taste typical of Peter Morgan, the activist many believe to be behind the campaign, one of the “Say No to 20mph” stickers has even been placed on the parking terms board outside Mayday Hospital.

“Sooner or later this sticker will be spotted by a family visiting a loved one involved in a road traffic accident caused by a speeding vehicle,” Shasha Khan, of the Green Party, told Inside Croydon.

Croydon Council’s public consultation over the 20mph zone runs until next Wednesday, June 24.

As Inside Croydon reported last week, senior figures within the ruling Labour group are concerned that the consultation is being dominated by Morgan and a handful of “anti” activists, while many residents who might welcome improved traffic calming on their streets have so far been apathetic towards yet another council consultation.

The council’s handling of the consultation has also been criticised. It has taken until the final 10 days of the consultation period for the council to use sketch maps in an effort to make it clear that the consultation applies only to wards in the north of Croydon. Senior figures within the local Labour group have been unconvinced of the benefits of the policy, with former Thornton Heath councillor, now an alderman, Adrian Dennis, openly speaking against the proposals.

None of the fly-posted posters or stickers have any contact address for the person or people who have produced them, although Morgan has complained publicly about the unlawfully posted slogans being removed by council employees, or as he called them, “stormtroopers”.

Coulsdon resident Morgan has often lobbied on behalf of the Alliance of British Drivers, but he has a well-deserved reputation, even among right-wing political groups, for being a disruptive influence. Earlier this year, Morgan and two UKIP colleagues moved for a council by-election in Selhurst ward before the funeral of the deceased councillor, Gerry Ryan, attracting widespread condemnation.

Morgan is understood to have been expelled from the Conservative Party, for being simultaneously a member of UKIP, and he had his membership of UKIP suspended for causing difficulties at their party meetings.

Less surprisingly, perhaps, Morgan has now rendered himself as persona non-grata with Croydon Greens for his efforts to stop the council introducing 20mph speed limits.

The Greens point out that the saynoto20 website is identical to one of the pages on UKIP Croydon North’s website. “The Twitter account also appears to be run by a UKIP member,” the Greens claim. 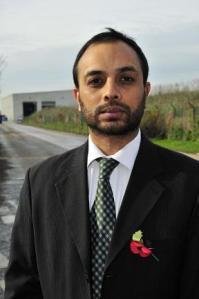 “Just like on Climate Change, UKIP are once again going against public opinion and commonsense by disputing the overwhelming and logical evidence,” said Khan, who was the Greens’ candidate in Croydon North at the recent General Election.

“They say that reducing speed limits to 20mph will have little if any impact to road safety, but research shows that, on average, for every 1mph speed reduction there is a 6.2 per cent accident reduction.

“We are pleased the Labour council are following other councils in London, such as Islington and Southwark, in moving to 20mph limits. 20mph speed limits on residential roads has long been a national policy for the Green Party.

“Unfortunately, the feedback I am getting from many mums and dads is that they thought the notices pinned on lamp posts were more of a notification rather than a consultation. They don’t realise that they have to tell the council that they support 20mph limits so that they are brought in.

“The no campaign has also been illegally fly-posting their messages. We must not allow UKIP to hijack this consultation It is vitally important people go online and complete the survey at http://www.croydon.gov.uk/20mph or obtain a paper copy from the council.”