Posted on October 2, 2015 by insidecroydon

Lambeth Council has announced that it is to close five of the borough’s 10 public libraries as a consequence of the cuts in grants from central government. The Labour council’s proposals have been criticised as a “postcode lottery” for the borough’s residents.

Today’s announcement also directly impacts one library which serves part of Croydon: Upper Norwood Joint Library, for a century operated by the two neighbouring local authorities, but which is now being cut-loose by Labour-run Lambeth to be operated by a volunteer-reliant trust working with Croydon Council.

A spokesman for the Save the Upper Norwood Library Campaign described Lambeth’s move towards volunteerism as “deeply cynical”.

The fear and inevitable conclusion is that Croydon Council, confronted with a similar level of cuts from the Tory government, will be faced with the prospect of reconsidering the future operation of its borough network of public libraries, which have already endured cuts and an undermining out-sourcing during the past five years.

Lambeth reckons it will have £200 million less in its annual budget in 2018, compared with 2010. “We’ve done everything you would expect us to do in the first round of cuts to protect front-line services,” Jane Edbrooke, Lambeth’s cabinet member responsible, said. “We reduced management, restructured our departments, reviewed our contracts and reduced our over heads. We spoke to other boroughs about joint working and we’ve also taken the tough decision to put up Council Tax by 1.99 per cent.

“But that only got us so far – and the £90 million of cuts we are now making, on top of the £110 million we’ve already made, means heart breaking decisions which no Labour administration wants to make.” Lambeth Council has already reduced its pay-roll by 1,000 since 2010; the possibility that hundreds more employees – including many who happen to be Croydon residents – could be made redundant seems a real threat.

In the context of massive cuts, what Lambeth calls “cultural services” – arts, parks, sports and libraries – represent “easier” cuts to make compared to reducing the amounts paid for the care of the elderly and disabled, on homelessness or dealing with domestic violence. Lambeth’s cultural spend, £10.4 million in 2014, will be reduced to £6.5 million by 2018.

Meanwhile Waterloo and one of either Durning or Tate South Lambeth appear doomed to closure. The Oasis Trust – another arm of the Christian organisation which runs the academy schools – will take on the running of a “community library” in Waterloo (presumably releasing the valuable real estate of the existing public library on the bustling Lower Marsh street market to be flogged off).

Edbrooke said, “We will continue to support Upper Norwood Joint Library Trust to be our first library to transition into a resident-led community hub,” where the use of the word “support” appears to mean race away as quickly as they can.

Edbrooke said, “Upper Norwood Joint Library will be our first independent library – with residents stepping up and running the building for the community. We hope Carnegie will follow in its footsteps. We will also follow Merton’s example and increase library volunteers, allowing us to extend the opening hours of our Town Centre libraries even further.”

The “V” word is like Kryptonite to library advocates, who cherish and understand the important role professional librarians can play at the hub of communities.

Read the Lambeth Council report in full here Culture 2020. The report will be discussed as a council cabinet meeting at Brixton Town Hall on October 12.

The report was revealed this afternoon at “a very sombre meeting” of Friends of Lambeth Libraries.

“The Upper Norwood Joint Library was long-heralded as the best example of library provision across both Lambeth and Croydon with its unique joint funding structure and provision of service for residents of all five boroughs of Crystal Palace. It faces a very uncertain future with particularly burdensome loads being transferred from statutory funded provision to effectively a volunteer model. 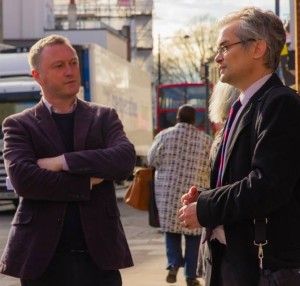 “I would ask all our elected politicians especially of Lambeth and Croydon: can they look their constituents in the eye and say this is just?

“In consultation after consultation, Crystal Palace has said it wants a properly funded and professionally staffed library. Come election time there has been lots of soft words of support for the community.

“People want to see their politicians take a stand with the community and defend their interests with actions rather than talk. If anywhere can make a community library work it is Crystal Palace, with its rich vein of community activism.

“But to take advantage of this volunteerism which is already thinly spread across a great myriad of causes is deeply cynical,” said Gibson, who recently resigned from the library trust when he discovered that he was being excluded from certain discussions about the facility’s future.

“It is totally unjust that our most vulnerable, the deprived, the socially excluded, the elderly and the young should be hit with this hammer blow when austerity is already laying them low.”