Is this the election real life? Is this just MP Barwell’s fantasy? 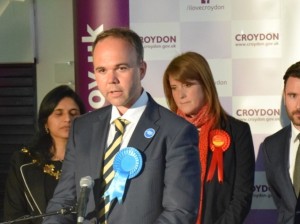 Gavin Barwell gives his ill-prepared speech at the 2015 election declaration, with the defeated Labour candidate, Sarah Jones, left to reflect on the 165 votes

If anyone needed further evidence that self-serving career politicians are only in it for themselves, then Gavin Barwell’s How To Win A Marginal Seat: My Year Of Fighting For My Political Life provides it by the bucketload.

Perhaps inadvertently, but this is surely the world’s longest job application.

It is an open secret that Gaffe-prone Gav, who has been Conservative MP for Croydon Central since 2010, is already preparing himself for life after 2020, as Barwell has been admitting within local Tory circles that the seat is not winnable by his party at the next election – or possibly sooner if the insidious Government of which he is proud to be a benefit-cutting member continues to tear itself apart.

Even in this book, Barwell writes that he might actually have to find himself a proper job for the first time in his life (spoiler alert: that may well be a cozy directorship of some sort, to do with political campaigning, and paid for out of untaxed surpluses by his old mucker, Lord Cashcroft).

Barwell will, of course, deny all of the above. He always does. That’s part of his schtick. On Day 1 at Tory Central Office, where he landed himself an insider’s job straight after private school and Cambridge, someone must have mentioned “plausible deniability” to him, and he has made it his stock in trade ever since. Even when it means denying his own actions or words.

I give you, your honour, page 231 of Barwell’s confession. “For the last year,” he writes in the chapter on polling day, when the Conservative clung on to his seat by a mere 165 votes, “this campaign had dominated all my waking hours and disturbed my sleeping ones.”

There it is: an admission from Barwell that, from June 2014 and through the first four months of 2015, saving his own political skin was far more important to him than any concern for his constituents or the country.

Gavin Barwell, centre, out delivering leaflets during the 2015 campaign with Michael Gove. Are they the most over-paid, state-funded  delivery boys known to mankind?

What passes for insight in the book actually reflects very poorly on Croydon’s political classes.

It was not just Barwell who obsessed for 12 months on getting Barwell elected. There was also his staff of six – all paid for by tax-payers, in some cases twice over. And then there were the senior councillors, such as Croydon Tories’ leader Tim Pollard, who appear from Barwell’s account to have devoted a disproportionate amount of their time and energies to their campaigning. Instead of actually doing anything useful.

Indeed, as anyone who endures the relentless campaign selfies posted on social media each weekend will observe, it sometimes appears that Croydon’s 70 councillors are paid at least £11,000 per year each to provide nothing more than glorified leaflet delivery service for the Conservative and Labour parties.

Barwell’s book is documented proof of that self-serving attitude. And this particular piece of vanity publishing provides 246 pages of his narcissism, which even if you allow for it being a political memoir of sorts, takes Barwell’s obsession with his own career to new depths.

Judged on that basis – as a work of political memoir – the book fails on many counts. It is not about a significant figure. It is not well written and it is poorly edited, if edited at all: within its opening passages, Barwell tells us more than once that, “I had hung on by the skin of my teeth”, demonstrating that he does not possess even a humdrum writer’s richness of language, or a spare metaphor.

There are other instances of repetitiveness. Twice in a matter of a few pages, Barwell refers to his predecessor Andrew Pelling as a “friend”. Is he trying to stress a point for his own sake, perhaps? Given what else Barwell admits in the book, then if you are a “friend” of his, you had better watch your back.

MP Pelling had the Conservative Party whip removed from him when arrested on an allegation of assault. No charges were ever pressed. Barwell icily describes this as “an opportunity”. Nice.

Lord Cashcroft: Barwell, and his book, owes him much, if not everything

The book is written in the style of Political Campaigns For Dummies, which might have been a better, more honest title. It might have use for some politics junkies and wonks, and it ought to be compulsory reading for those working in the ruling group at the Town Hall or in Croydon Labour’s headquarters at Ruskin House.

Hyper-locally, it does confirm what many suspected: that Barwell was so dissatisfied with the bungling local election campaign of 2014 and the clusterfuck that was Mike Fisher’s #WadGate that he basically over-ruled the rest of the local party for the 2015 campaign.

But in the main, it offers patronising platitudes, and serves as nothing more than a lengthy justification for Barwell, the professional campaigner.

I mentioned vanity publishing – where authors, so desperate to see their work in print and unable to find a publisher, end up paying someone to print their work for them. While Barwell may not have done that literally, there is a strong sense of that about this book.

Only available in print as a paperback, it uses cost-cutting generic cover design work and it is printed on very cheap paper which renders the numerous pictures used throughout its pages of a very low quality. It is, of course, published by BiteBack, a company part-owned by Lord Cashcroft. Or, as Barwell calls him, Michael.

Barwell’s utter reliance on Ashcroft is made plain in the early chapters of the book. Ashcroft was once Barwell’s employer when he worked for the Conservative Party, and he relates in the book that before he put himself forward for selection as the Tory candidate for Croydon Central, he first sought his boss’s approval.

“I needed to speak to Michael Aschcroft and get his permission,” Barwell writes, admitting what has long been suspected of him, that he is not his own man. Craven, much?

As a former Ashcroft bag-man, Barwell reveals the dirty tactics and the dark arts of campaigning. But there is no insight into how Barwell’s close connections with Ashcroft impacted on the Croydon Central MP’s relationship with Prime Minister David Cameron. Ashcroft, after all, used BiteBack to publish his own, unflattering biography of Cameron, Call Me Dave, ahead of the 2015 General Election. But that book is unmentioned by Barwell, who also fails to tell us how his own relationship with Ashcroft has impacted his ministerial career and prospects.

Gavin Barwell’s campaign was blighted by own goals

The author might try to justify such significant omissions by claiming this to be a book just about his campaign – though since he admits to not starting writing the thing until after May 7 last year, it can only be regarded as a most unreliable memoir.

It’s what is not in the book which is most telling. Anne Piles must be devastated that she doesn’t even warrant a footnote. But then, how does an MP for a diverse London seat explain how his local party manages to tolerate overt racists among its campaigners and senior officials?

Of course, deceit by omission is a core part of Barwell’s technique. Getting supporters to write letters on his behalf, but asking them not to mention the Conservatives or David Cameron, remains the single occasion in nearly six years as a London MP when Barwell has done something which has made it on to the front page of the Evening Standard.

“The worst moment of the whole campaign,” Barwell says of the episode in the book, where he persists with the line that his campaign team did not draft the support letters themselves, when Inside Croydon discovered at least one instance in which Barwell’s campaign distributed a bogus letter from one old lady who, after suffering a debilitating stroke, was too frail to sign her own name, never mind provide her MP with a gushing reference.

And while there’s a passing reference in the book to a mass canvass by young Conservatives in Croydon Central, Barwell does not to mention that his campaign actively benefited from a visit from the “Tatler Tory” Mark Clarke on one of his notorious booze and sex “Road Trips” (though in this case, they called it a Tube Trip), and which included the unfortunate Elliot Johnson, whose death last year is still under investigation.

Maybe Barwell just doesn’t want anyone to realise to what lengths he was prepared to go to maintain his parliamentary seat.

Of course, the only reason Barwell retained the seat was the abject collapse of the UKIP vote, from 19 per cent six months beforehand to just 9 per cent voting for Peter Staveley at the polls.

Staveley’s non-campaign is unexplained in the book by Barwell, who also relied heavily on not mentioning to the voters his support for the EU (more deceit by omission) and in sending out a letter (another one) from a former UKIP deputy chairman asking UKIP voters to vote Conservative, but somehow forgetting to explain that Craig McKinlay was, by now, a fully paid-up candidate for the Tory Party. Hardly the epitome of frankness.

It is a truism that history is written by the victors, but Barwell’s capacity for bending the truth to suit how he presents himself extends in this book to heaping abuse upon a constituent to cover-up his campaign dissembling, such as his claims of a “role” in “saving” Crystal Palace football club.

It is typical of Barwell that he singles out one voter for having the audacity to highlight the misleading nature of the Tory candidate’s claims, which resulted in the MP being bombarded by angry Palace fans. Barwell, as ever, is impervious to their annoyance at his attempts to annex their club’s fate to his campaign efforts. He claims to have received “hundreds” of supportive emails from football fans grateful for the (negligible) role he played.

But like several passages in the book, this claim, some five years after the fact, just does not ring true. Was it all a figment of the author’s imagination?

For gaffe-prone Gav, this unreliable memoir might turn out to be his biggest gaffe yet.

News, views and analysis about the people of Croydon, their lives and political times in the diverse and most-populated borough in London. Based in Croydon and edited by Steven Downes. To contact us, please email inside.croydon@btinternet.com
View all posts by insidecroydon →
This entry was posted in 2014 council elections, 2015 General Election, Croydon Central, Gavin Barwell, Sarah Jones MP and tagged Barwell, Conservative, Croydon Central, Gavin Barwell, Labour, Mike Fisher, Tim Pollard, Tory. Bookmark the permalink.

5 Responses to Is this the election real life? Is this just MP Barwell’s fantasy?