Labour members get chance to ask Reed about Corbyn coup

Labour members in Croydon North, who Steve Reed OBE, the constituency MP, refused to answer with a frank explanation of his position over the party’s leadership, have the chance to get up close and personal with Progress vice-chair this Saturday to ask him directly about his part in what has become known as the #ChickenCoup, the underwhelming attempt to oust Jeremy Corbyn.

Splitter? Steve Reed OBE spoke of splitting the Labour Party at a recent meeting in Westminster

Reed refused to answer questions about the leadership at his Constituency Labour Party (CLP) annual meeting last month, but 48 hours later he resigned from Corbyn’s shadow team at Westminster, claiming that he had consulted his constituency’s membership. Reed’s account of events has been bitterly disputed by several who attended the meeting, including local councillors.

In 2015, the membership of Croydon North CLP overwhelmingly nominated Corbyn for the leadership. This was clearly a bit awkward for Reed among his Blairite chums.

For Reed is a leading figure in Progress, the Blairite clique which is generously funded by Lord Sainsbury. It is more than 30 years since Neil Kinnock, when he was the Labour leader, railed against the existence of such parties-within-the-party.

Kinnock has recently returned to the airwaves, to denounce Corbyn as a Labour leader who could not win a General Election. That’s something Kinnock knows much about, having managed to lose two.

The now Lord Kinnock, a politician who once also spoke out against the undemocratic and unelected second chamber, last week gave a speech at a Parliamentary Labour Party meeting which was also addressed by Reed. The PLP meeting was private, and there is no formal record of what Reed said himself. But Kinnock’s speech was recorded.

At the end of his address, Kinnock said that the Croydon North/Lambeth South [delete to distaste] MP had suggested that the party might split, or perhaps that Reed was in favour of such a split.

“Steve Reed made a very fine contribution,” Kinnock said, before adding, in bellicose language, “There will be no split! There will be no retreat! Dammit, this is our party! I’ve been in it for 60 years, I’m not leaving it to anybody!”

That’s not necessarily a view shared by two of Reed’s closest political allies in Lambeth South. Catriona Ogilvy, a supporter of Reed’s when he was the controversial leader of Lambeth Council, was installed as the CLP chair in 2014, though she proved to be so unpopular with members she lost that position within a year, while John Wentworth, a Croydon councillor who spends time at council meetings watching football on the telly, is Reed’s golf-playing gofer, the MP’s agent.

Last night, Labour’s ruling National Executive Committee decided that Corbyn, as the incumbent leader elected only nine months ago by an overwhelming majority of party members, should be on the ballot paper for any leadership election. The decision was swiftly greeted with dismay by Reed’s supporters, clearly unhappy that the party’s members should be allowed to have their say.

Between them, Ogilvy and Wentworth expressed publicly that they were “ashamed to be part of the current Labour Party”, or described the party’s democratic process which Progress’s #ChickenCoup had brought about, as “painful”.

Now, though, other Croydon North Labour members interested in what Reed was able to share to his PLP mates at Westminster but was unwilling to talk about with them in south London have another opportunity to speak to their MP.

Last weekend, constituents on Reed’s contact list in Selhurst ward received House of Commons headed letters inviting them to a “residents meeting” at the Victory Club, next Saturday at 11am. Somewhat oddly, perhaps, Labour Party members in Selhurst have related to Inside Croydon that they have not received Reed’s invitation to this cosy get-together. 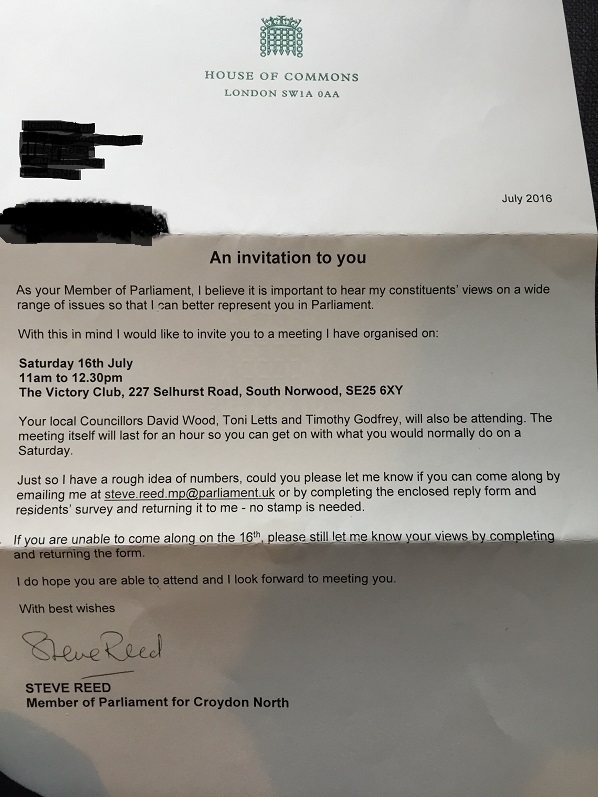 As might be expected of an MP, Reed has staged other meetings in his constituency since he was elected in 2012. This Saturday’s meeting is to be attended by the three Labour ward councillors, Toni Letts, Timothy Godfrey and David Wood.

But the distrust of the Progress MP among his party members is such that some suggest that he is deliberately excluding Labour grassroots members and that he will use the meeting to justify his actions over the leadership challenge.

“This looks like Reed trying to build a base of support outside the Labour Party in the case of a split,” said one member.

“Why else call a meeting and not tell your own party members? Quite a clever move too – if local members turn up and raise his behaviour in the PLP, they’ll be portrayed as ‘Momentum thugs’, disrupting a meeting called to help locals with their problems.

“But if they say nothing or don’t attend the meeting, Reed can turn up to the next CLP and say ‘Why do you all want to talk about these petty internal issues? I had a meeting locally and local people are most interested in dog poo and fly tipping than Jeremy Corbyn!'”