The Croydon Sadvertiser is dead.

It’s ceased to be. It’s pushing up the daisies. It’s gone to meet its maker. It is a dead local newspaper. Or at least, it is ever closer to that point.

And it’s not me who’s saying that.

It is Gareth Davies, the paper’s much-lauded ex-chief reporter, in a Twitter rant last night which tore into the paper’s owners, Trinity Mirror (TM for short), with a ferociousness which the journalist had failed to summon up publicly during his eight years working on the title.

His ire was raised last night because he had just seen the latest, and possibly lamest, issue of the paper. And being the Sadvertiser, there is some stern competition for the title of most facile, news-lite edition.

“A paper with a proud 147-year history reduced to being a thrown-together collection of clickbait written for the web,” Davies wrote at the start of his tirade, just before 10pm.

“So, yeah, things are really shit,” he observed later.

“Local press should be a vital part of democratic accountability and a force for change, not an exercise in generating clicks by any means,” Davies wrote.

“TM and other publishers lost all sight of that and advertisers are catching on.

“Their model only accelerates the demise of local press.

“This race to the bottom began years ago… It’s just TM has turned it into a brand and given it a name.

“As of this week,” Davies tweeted, “paper consists entirely of stories scraped from website by subs and put in paper.

“The paper’s only role is to prop up the website with meagre advertising revenue.” Note the use of the word “meagre”.

Davies attributed his departure from the staff last month to a higher calling. “It breaks my heart,” he wrote. “I couldn’t stick around to watch the paper be destroyed and I would not help them do it.”

He wrote of how one staff member had been told by phone that they were to be made redundant, and how reporters have to seek special permission to work on stories which might generate fewer than 1,000 page views on the website.

Over the course of his two hours or so on social media, Davies only confirmed much of what we here at Inside Croydon Towers have been suggesting for the last six years. For expressing those views, we have been subjected to criticism and abuse – from Davies and some of his colleagues.

The thing is, the Croydon Advertiser, founded in 1869 by Jesse Ward, no longer exists as a local newspaper that serves Croydon, and it has not done so for some time. The last nail in that aspiration was hammered home on the day four years ago that they moved the editorial offices to Redhill, in a cost-saving measure which sources at the title suggested was a “move it or close it” option. It has been a slow, lingering death.

The newspaper’s print circulation has plummeted from 77,000 in 2011 to an average weekly sale of 7,851 according to the latest independent Audit Bureau of Circulations.

This week, Polly Albany-Ward became the latest Sadvertiser reporter to leave the newspaper. In a jolly missive to her contacts – all of them helpfully listed in the cc list of her round-robin email – she chirped, “I have had a great deal of fun reporting on what is undoubtedly one of the best places, but I have decided it is the right time to move on.”

The reporter failed to report where she was moving on to. But she did suggest that the newspaper now has to get by each week using the output of only three news reporters.

In his tweets, Davies reckoned that there are just two reporting staff, and that these have to “help cover Croydon, Sussex and Surrey”. They are also working under instruction to “write like they speak down the pub”, Davies said.

According to one former Sadvertiser staffer who left the paper when it was still Croydon-based, in their time on the title “…there were a dozen news reporters, a news editor and deputy on the news desk for the Croydon Ad.

“When I went back for a few leaving dos the other week, I think there were fewer than 20 editorial staff to cover the Advertiser and another four newspaper titles and their websites.”

That works out at four staff, per newspaper. And that’s on the good weeks, provided no one’s taking holiday or off sick.

In part, according to Davies, it is because the low-paid young journalists are so powerless. “Trinity [Trinity Mirror, the owners] can get away with all of this because these are junior reporters and there’s no union recognition.” Yes, that’s Trinity Mirror, also owners of the supposedly left-supporting Daily and Sunday Mirror.

As Inside Croydon has previously reported, the “local” part of local newspaper was stripped from the Croydon Sadvertiser long ago: as well as sharing its offices in Redhill with a handful of Surrey and Sussex titles, its news pages these days are subbed and laid out at an “editorial hub” in  Essex (not much south London local knowledge there), while the sports pages are run from an office in Tunbridge Wells.

Albany-Ward was one of the Redhill-based hacks who – according to Davies last night – has had to get authorisation whenever she wanted to claim travel expenses for a trip into Croydon to conduct an interview or research a story for the supposedly Croydon newspaper.

It is telling that in recent months, leaving the Sadvertiser have been…

Journalists are usually not instinctively reckless characters. They have mortgages to pay and families to support. So to opt to leave a senior salaried job to embark, as one departee has done, on nothing more stable than casual subbing shifts on the sports desk of a Murdoch-owned paper, even with a redundancy wedge in your back pocket, suggests that things at the Sadvertiser have got very bad indeed.

The departures list represents a litany of failure by the newspaper’s management which is typical throughout the industry. 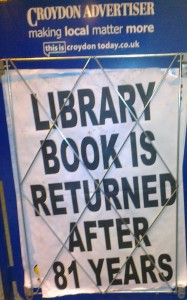 Remember, the Croydon Sadvertiser‘s management five years ago thought it was a great idea to distribute the paper free-of-charge in part of the borough (the affluent south), while continuing to charge its loyal readers for copies if they were in the north of the borough. This inflated circulation, for a while, to 77,000 per week, which will have impressed advertisers, but the number of copies actually sold continued to decline.

And once the plug was pulled on all those freebie issues, the circulation figures took a nose dive faster than Tom Daley into the Olympic pool. Which brings us to the story of the 2008 Beijing Games…

Now, for a declaration of (dis)interest. Eight years ago, I was invited to write a weekly sports feature for the Advertiser‘s website. The ending of this arrangement has subsequently been portrayed by Gareth Davies as my having been “sacked” by the paper.

According to Davies, it is this which has motivated any criticisms of the Sadvertiser‘s more parochial coverage – and the almighty bollock-drops, such as our report about the newspaper’s front-page story about a West Croydon brothel, when shamelessly the paper was advertising the same establishment in its small ads.

I’d received praise in writing for the online sports column from the commissioning editor. While I never set out to cover the paper’s bread and butter sports, such as Crystal Palace football, I was told on at least one occasion that the feature had attracted the website’s biggest traffic in a week.

Come the Beijing Olympics, I  offered the Croydon Sadvertiser – which outside football was not known for sending its reporters to games of any kind, never mind Olympic Games – one of the biggest stories of the first week of events, the poolside spat between Tom Daley and his synchro diving partner, Croydon local Blake Aldridge.

The story needed pictures, and I put the paper in touch with a freelance photographer, suggesting that they should be paid for their work.

The paper refused to pay even a modest £20, single-use fee. Soon after, I was told that my traffic-driving sports column was dropped, with no explanation or reason.

Inside Croydon was launched a little while later.

And last night, Gareth Davies, for six years a constant critic of this website while he was employed by the Sadvertiser, finally chirped up about his newspaper’s short-comings and its demise.

Perhaps he needed to step away to see the bigger picture.

Inside Croydon had crossed swords with Davies in the past, when he was seeking to report a story in which it appeared that he may have wanted to discredit me and this website.

We had previously written about a Conservative councillor, Clare Hilley, who used her official Croydon Council email account to trawl for work with PR agencies, based on her claimed “expertise” and contacts in local planning. At the time, Tory councillor Hilley sat on the council’s planning committee.

Clare Hilley: councillor who applied for jobs based on her “planning expertise”

Late on a Sunday night in June, a hand-delivered, threatening letter from Hilley dropped on to the doormat of Inside Croydon Towers. Davies seemed to be in possession of a copy of that same letter first thing the following day.Hilley accused Inside Croydon of harassment, “cyber-bullying” (we’d reported what she had been doing, and we did so online) and worse. She also turned to the expensive legal firm, Carter Fuck, to try to intimidate this website and get the story about her conduct pulled from the interweb. We estimate that she – or her property-owning daddy – must have spent at least £3,000 in fees with the libel solicitors.

When we refused to retract (we had her incriminating email, after all) she backed down. Davies never got his story. Following complaints to her Tory Party bosses, Hilley (quietly) lost her position on the planning committee – though the council never took any disciplinary action. Hilley did not seek re-election in 2014.

Hilley’s misuse of her public office was exactly the sort of story which Private Eye, and other publications, had been running about Croydon, but that the Sadvertiser did not, and rarely goes near now.

After the Hilley scrape, Davies went on to handle the local newspaper’s take on Lillian’s Law and bravely resisted legal challenges to his own efforts to report the nefarious activities of local fraudsters and other ne’er do-wells. Just as he and any reporter should do.

But in his Twitter outburst last night, Davies made it plain that it is most unlikely that local newspaper reporters covering this part of south London will be doing much “holding power to account” any time soon.

It is an interesting reversal of his position.

Six months ago, when challenged about the “clickbait” nature of so much of his newspaper’s content, with Crystal Palace football stories dominating the Sadvertiser‘s “most read” lists, Davies opted to toe the corporate line, claiming that important and serious news stories were drawing significant numbers of readers online.

According to the Sadvertiser‘s former chief reporter, almost three-quarters of the paper’s stories attract fewer than 1,000 hits. And now the management is only authorising reporters to write reports which will generate more than 1,000 hits

Not any more he doesn’t. Last night, no longer on the payroll of Trinity Mirror, Davies abandoned that charade.

Highlighting the 1,000 hits per story company rule, Davies made an indisputable point: “That policy will only result in the paper no longer reporting on the majority of the issues it has a responsibility to cover.”

In other words, the level of scrutiny of those public servants working in Fisher’s Folly or the local politicians who play at PMQs in the Town Hall chamber, will be worse than ever.

Just don’t expect the Sadvertiser to hound local officials much over any misconduct.

3 Responses to Former reporter in bitter attack against ‘clickbait’ Advertiser