Life and works of CLR James brought to the big screen

Posted on August 7, 2016 by insidecroydon

The film, Every Cook Can Govern: The life, works and impact of CLR James, has its south London premiere on Wednesday August 17 at 6.15pm at the Brixton cinema just a short walk from where one of Trinidadian-born writer lived the final years of his life.

Screened at the Ritzy Picturehouse at Brixton Oval, the film is the first feature-length documentary to explore the life, writings and politics of James, through a challenging overview of his thoughts on everything from colonialism to cricket, from Marxism to the movies, from reading to revolution.

James died in Brixton in 1989. In its obituary, the Daily Telegraph described Cyril Lionel Robert James as “the Plato of his generation”.

The WorldWrite film interweaves never-before-seen footage of the writer and thinker with unique testimony from those he knew, alongside interviews with the world’s most eminent scholars of James’ life, work and politics.

What emerges is an understanding of what it meant to be an uncompromising revolutionary in the 20th Century. 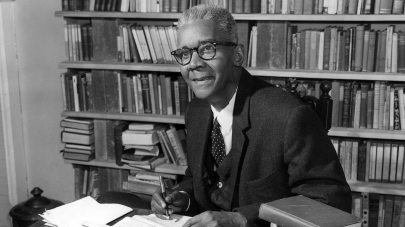 CLR James: One of the great writers of the revolutionary change in the 20th Century

“I would encourage everyone to see Every Cook Can Govern,” said Professor Robert Hill, of UCLA and literary executor of CLR James, one of the participants in the film. “Let CLR James be your guide: you will have a world to discover, and there is no better source that I know of in doing so than this labour of love from the makers of what is truly a heroic, magnificent work of art.”

Dr Christian Høgsbjerg, the author of CLR James in Imperial Britain, called the film a “truly remarkable documentary – an incredible collective labour of love by its makers”.

The film, Høgsbjerg said, “illuminates how he revolutionised our understanding of the historic relationship of black people to Western Civilisation”.

Although this is not a free event, the cinema has promised to provide the charity WorldWrite with 35 per cent of ticket revenue. WorldWrite says, “This is marvellous, as acquiring the rights to use the archive footage of CLR James has cost us a fortune.”

At the screening there will also be a Q&A with the film’s directors and bring family and friends.

Listen to Croydon resident Darcus Howe’s 2002 appreciation of the life and works of his great-uncle, CLR James, here.

For more information about WorldWrite and to get involved in future projects, please visit the website.

News, views and analysis about the people of Croydon, their lives and political times in the diverse and most-populated borough in London. Based in Croydon and edited by Steven Downes. To contact us, please email inside.croydon@btinternet.com
View all posts by insidecroydon →
This entry was posted in Activities, Cinema and tagged CLR James, Darcus Howe. Bookmark the permalink.