The local club rugby season kicks off in the coming weeks, at MidWives Lime Meadow Avenue, above, and around the borough, starting a week tomorrow

RUGBY ROUND-UP: London and South-East 3SW side Warlingham has secured the services of former Canadian international back-row forward Richard Thorpe as a consultant coach, to complete a training set-up which other clubs in London will struggle to better, according to their Director of Rugby Nick Warren.

Born in Beckenham and schooled at Whitgift, Thorpe took his international qualification through his Canada-born mother and won eight international caps, including playing at the 2015 Rugby World Cup. He had a long and successful professional club career with Leicester, London Irish and London Welsh.

Warren said, “Richard brings experience of top-class rugby to the party and is ideal to help us prepare for the new season. We’ve got a number of new players joining the club who are vying for first XV places and all the boys are loving Richard’s input and we should be well-prepared for our league challenge.

“Richard will be our consultant defence coach for the 2018-2019 season as well as auditing our coaching structures to add a professional element.”

Also joining the Hamsey Green coaching team are Eddie Abrose, a former prop with Barking in National Division One, and Tom Burns, the former captain at Canterbury. Both will be responsible for the development of the club’s set pieces, as well as developing the young players in the squad. 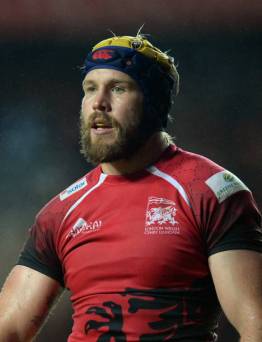 “Warlingham can now boast a coaching structure which will struggle to be bettered in the London leagues,” Warren said.

“Any young player in the area who wants to improve would benefit by joining Warlingham. We now boast six coaches who have played or coached in National Division One and above, including a player with over 100 top-flight games including a World Cup. The structure on the field has developed beyond my expectations.

“With chairman Peter Mattison, and performance director, Neil Robson, we will be developing the medical infrastructure off the field so players have the best treatment possible.”

OVER AT Lime Meadow Avenue, pre-season training for Old Mid-Whitgiftians has been lively, with around 80 players being put through their paces by a pair of teachers at Riddlesdown School, coaches Andy Edwards and George Daniels.

There is a useful injection of younger players with returners from university and some local recruits, plus plenty of solid experience among the established players, and this blend has high aspirations for their 2018-2019 season, in Surrey 1.

MidWives will continue to field strong second XV and Veteran (over-35) sides, with the Seconds captained by Dave Perry and Jack Sibley jointly, while the Vets will be out to retain the Surrey Cup they won last term.

Mids’ 1st XV first league fixture is at Old Haileyburians on September 22, but they have a couple of friendlies before that, at Caterham tomorrow afternoon, and then play Bec Old Boys at Trinity School on September 8.