Fans fear that Saturday’s derby could be last Croydon Clasico

Posted on December 18, 2018 by insidecroydon

NON-LEAGUE NEWS: A spokesperson for Croydon FC this morning denied the rumour that Jose Mourinho, having been sacked by Manchester United, is to be brought in as manager at Croydon Arena. 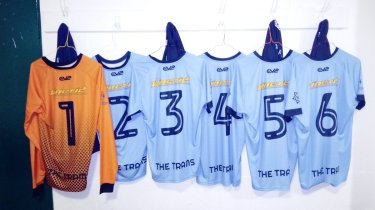 Croydon FC recently unveiled two new shirt sponsors. They could do with at least two new points in the league

“Not even Mourinho could save them now,” they might have said.

Croydon, the crisis-hit Southern Counties East League club with only one league win all season so far, have gone nearly three months without appointing a permanent successor to Craig Davies, who quit as manager in September. Chris Brown has carried out the first-team duties on a caretaker basis since.

On Saturday, Brown and his squad travel the short distance to Mayfield Road, home of local rivals Croydon Athletic, for what is looking like being the last Croydon Clasico derby for quite a while. Maybe even forever, according to doom-laden Trams fans.

Croydon have lost 16 of their 17 matches so far this season, the latest at Bearstead last Saturday, when a grand total of six travelling supporters from Croydon witnessed a 2-1 defeat. 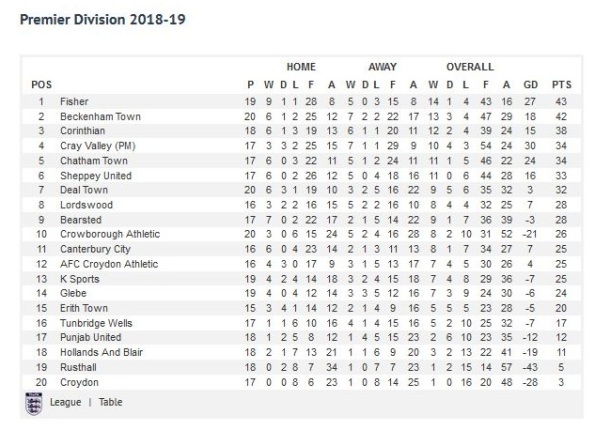 Croydon appear to have already accepted their fate, and relegation to Level 10 in the FA’s pyramid of leagues.

This would be a shameful experience for a club that was once in the top division of the Isthmian League and which plays its home games in a ground with an 8,000 capacity.

Two teams are to go down this season and only the winding up of Thamesmead Town in the division above offers a faint prospect of a possible reprieve for whatever club is second-to-bottom in the Southern Counties East Premier Division on the last day of the season.

Rusthall may only be two points ahead of Croydon, but even that appears too large a chasm for Croydon to bridge. Hollands and Blair are a further six points away, Punjab United (why weren’t they named Real Madras?) have one additional point.

The Trams have never recovered from the summer departure of manager Harry Hudson and at least nine players to Whyteleafe. 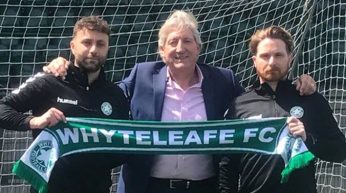 Such is the sense of doom among the dedicated Trams fans that some were seriously contemplating at the last home game whether Croydon has any future at all after May. Inside Croydon has had two different supporters confide that they worry that this could be Croydon’s last season.

“They need something transformational to happen, and that means some serious money by the standards of their division being made available,” a source close to the club said today.

“All the work that’s done off the pitch, to build the new club house and bar area, is not going to have an impact quickly enough. The supporters are so dedicated, they will probably still turn out next season whatever division the club plays in, but they are not generating enough money to pay for a players’ budget. 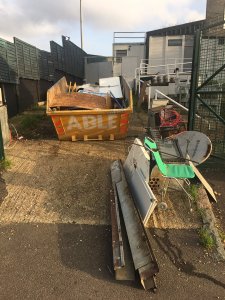 “And still the club has to find the £300 or so to pay to Croydon Council every time they use Croydon Arena for a home game, and that’s a constant drain on the club’s resources.”

Attendances are usually around 60 at the Arena.

For the side to go out of existence would be a shame, just as it has reached out to the local community. The club was at the opening of Ashburton Hall and has worked with local volunteers, including council officials and the police, to get volunteers to rebuild the clubhouse and bar and clear the area of rubbish and builders’ debris.

New kit and two shirt sponsors, Click Enterprise and Shaking Hands, were recently unveiled. It is suggested that this deal is on a similar basis to the previous one with a Swedish sports app: enough cash to pay for the kit, but little else.

The club still has close ties with the Kinetic Foundation, the sports coaching charity. It was talented players discovered and nurtured by Kinetic around whom Hudson built his squad that proved so successful last season.

“They are all mainly youngsters, and Harry took his pick of the best ones when he went to Whyteleafe,” said the source. “Clearly, those left behind are younger, less experienced, and they are struggling even at this level.

“Harry still has a say within Kinetic, and so he still gets a pick of the best players if he thinks he needs them.” And at Whyteleafe, who are chasing promotion in fourth place in the Isthmian League South-East Division, Hudson has a transfer budget, too. 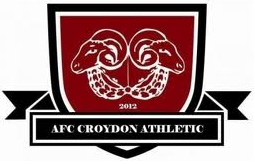 It’s meant that Croydon have been forced to send on boys against men this season. So a win at Croydon Athletic this Saturday would amount to a Christmas miracle for the South Norwood team.

The rival Rams are safe in the division for another year and will regard their primacy over the Trams as re-establishing the natural Croydon order.

Not that Athletic are lacking in troubles either.

“The club takes seriously the conduct of players, management and officials and where actions or behaviour fall below those standards it will not hesitate to take appropriate action. A further announcement will be made in due course.” 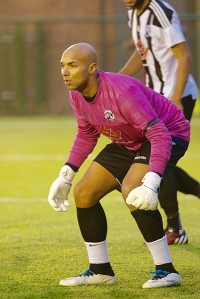 Nine days later, nothing more has been heard of the well-travelled 27-year-old, a former Fisher player who started out in the youth teams at Millwall and Crystal Palace and who has two international caps.

Athletic, 12th in the SCEFL, were unfortunate on Saturday not to take all three points, as they conceded a 90th minute equaliser from K Sports’ Jason Perry (certainly not the Croydon Tory councillor), after Joe Nwoko had given them an early lead.

The Rams will face tougher opposition on the Saturday after Christmas, when they host league leaders Fisher.

And things don’t look much easier for Croydon at the Arena on December 29. The post-Christmas entertainment will be provided by second-placed Beckenham Town.

Of course, back-to-back wins would transform Croydon’s and their fans’ outlook for 2019. But the only people who believe that is a realistic possibility also think that a jolly white-bearded chap will be doing the rounds on a sleigh drawn by reindeer on Christmas Eve…