Electoral Commission ruling is ‘victory for freedom of speech’

Posted on December 19, 2018 by insidecroydon

A clumsy effort to gag Inside Croydon, thought to have been conducted by Liberal Democrats in Sutton, has failed.

Our free promotional newspaper, Inside Sutton, caused panic and angst for the LibDems

A complaint was filed to the Electoral Commission, and is believed to have been made by LibDems in Sutton, where they are still seething that at the local elections in May they lost 12 council seats and the generous allowances that go with them.

The Electoral Commission this week dismissed the complaint against Inside Croydon that claimed that leaflets distributed to promote the planned launch of a sister news site were in some way election material.

This was despite the leaflets never including any message to encourage readers to vote for any candidate, and only carrying news stories which had previously been published on this website, and by Private Eye magazine, which detailed the Liberal Democrats’ record while in power in Sutton over the previous couple of years. All of our reports have been entirely fact-based, and none have been subject to any libel action or complaint to IPSO, the news regulator.

Each leaflet had a deliberately cynical and satirical “flash” label on its front page, such as “Dombey & Chums Special”, referring to a report inside about the convicted fraudster and ex-LibDem councillor Alan Salter; “The FibDems UnSpun”, detailing how the LibDems’ own party’s leaflets had broken election law; and our special favourite, “Ruth Dombey Erection Special”, referencing the massive erection of the Beddington incinerator.

This, though, was not an obvious enough indicator to the dim LibDems, who although they clung to control of the council, were clearly perturbed to have lost more than £500,000 as a result of their election defeats.

That’s the amount of public money which would have been paid over the four-year term of the council in allowances to the 12 LibDem councillors who lost their seats in the local elections. Under strict party discipline, sitting councillors are usually obliged to pay over a significant chunk of their allowance into their local party’s coffers, as Council Tax-payers provide a political campaign fund.

Sutton’s FibDems were getting their excuses in back in the spring for any possible disappointments at the ballot box, when in one particularly pathetic performance, senior Sutton cabinet member “Calamity” Jayne McCoy tried to blame Inside Sutton for her administration’s many short-comings. 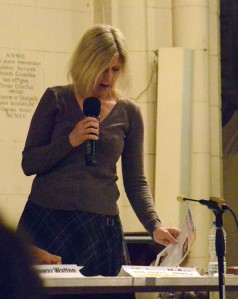 Well-read: LibDem councillor Jayne McCoy with a copy of Inside Sutton at election hustings last April

At the hustings, McCoy gave a clear indication that her party was against freedom of speech when she described Inside Sutton as an “illegal leaflet”.

Since the election, supporters of McCoy and Ruth Dombey, the leader of Sutton Council, have made further wild and inaccurate claims about our promotional material, and also made threats to refer us to the election authorities.

But this week the Electoral Commission ruled that, as in so many other things, McCoy and the Sutton LibDems are wrong.

Inside Sutton is an entirely legal and legitimate publication, just like any other newspaper or website, the Commission has ruled.

In a letter to Inside Croydon’s editor, Steven Downes, the Electoral Commission’s senior investigator, Matthew Franks, said, “After consideration, the Commission was satisfied with the information you provided and considers that the Inside Sutton leaflets which were reported to us likely fall under the campaign material exemption which applies to newspapers and periodicals.

“The Commission was satisfied that it would not be proportionate to continue the investigation.”

In other words, whoever it was who brought the complaint was wasting his and the Electoral Commission’s time.

Franks stubbornly defended the complainant’s dubious right to remain in the murky shadows of anonymity.

Today, Downes (pictured right, possibly) maintained that there would be future editions of Inside Sutton, online and in print, and that he was also seeking additional investment to enable the launch  of  Inside Woodside, a hyperlocal news publication for the people of South Norwood and nearby wards.

“I could say that the Electoral Commission ruling is a victory for freedom of speech and common sense,” Downes said.

“But I won’t, I’m really not that pompous. The ruling shows the shadowy individuals behind the complaint for what they really are… tossers. And you can quote me on that.”

With that, he stubbed out his cigar, pulled down the brim of his trilby, and went off in search of more news that the likes of Ruth Dombey would probably prefer remained unreported.

News, views and analysis about the people of Croydon, their lives and political times in the diverse and most-populated borough in London. Based in Croydon and edited by Steven Downes. To contact us, please email inside.croydon@btinternet.com
View all posts by insidecroydon →
This entry was posted in Inside Croydon, Jayne McCoy, Local media, Ruth Dombey, Sutton Council and tagged Electoral Commission, Jayne McCoy, Liberal Democrats, London, Ruth Dombey, Sutton. Bookmark the permalink.