Posted on February 27, 2019 by insidecroydon 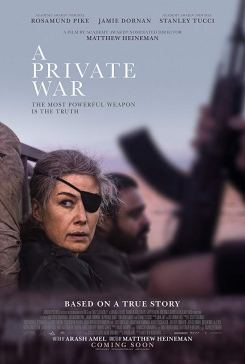 While Britain may, or may not, be turning its back on Europe at the end of March on Brexit Day, the David Lean Cinema’s programme for the following month serves as a demonstration that, as far as the movies are concerned at least, it is impossible to be isolationist for very long.

The Clocktower’s arthouse cinema will be screening movies in six languages other than English during April, with productions from 13 different countries, including Israel and Lebanon.

The month’s first offering, Foxtrot, is in Hebrew and is a study of some of the consequences of the Israeli military being on a permanent war footing.

War zones also feature in Rosamund Pike’s portrayal of Marie Colvin in A Private War, the bio-pic about the former war correspondent for the Sunday Times, and The Aftermath, which offers a claustrophobic look at occupied Berlin immediately after World War II. 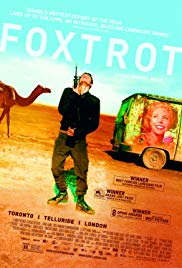 Tue Apr 2 FOXTROT (15) (7.30pm)
2017 Isr/Switz/Ger/Fr 113min (Hebrew with subtitles). Dir: Samuel Maoz
Stars: Lior Ashkenazi, Sarah Adler, Yonaton Shiray
When army officials visit Michael and Dafna’s home one day, it is a moment marked with deep sorrow: their son, Jonathan, has been killed on active service. Michael’s frustration and anger grow over time and, while his sedated wife rests, his ire develops only for him to experience an inexplicable twist of fate – a twist that can only be rivalled by the surreal military experiences of his son. A poetic depiction of the human side of grief and the moral hazards of military occupation. 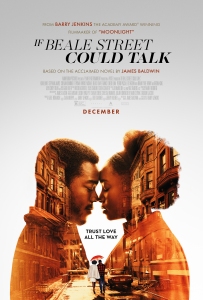 Thu Apr 4 IF BEALE STREET COULD TALK (15)
2018 USA 119min. Dir: Barry Jenkins
Stars: KiKi Layne, Stephan James, Regina King, Colman Domingo
Barry Jenkins’s follow-up to the Oscar-winning Moonlight is an adaptation of James Baldwin’s novel set in 1970s Harlem. Tish and Fonny are young lovers whose life is turned upside down when Fonny is falsely accused of raping a Puerto Rican woman. The camera lingers on the faces of the two young leads as their love is severely tested, in a film that is “achingly beautiful and devastating in its depiction of love and race struggle” (Jewish Chronicle).
* The 2.30pm screening will be subtitled for those with hearing loss

Tue Apr 9 CAPERNAUM (15) (7.30pm)
2018 Leb/USA/Fr 126min (Arabic with subtitles). Dir: Nadine Labaki
Stars: Zain Al Rafeea, Yordanos Shiferaw, Boluwatife Treasure Bankole
For Beirut’s underclass, life is capernaum (chaos), and 12-year-old Zain is suing his parents for bringing him into it. Labeki immerses us in a world where children are forced to grow up far too young, as Zain flees from his family home to a different struggle with an undocumented migrant worker and her toddler son. This stunningly realised drama, a Best Foreign Language Oscar nominee, is a humane and heart-wrenching depiction of life in the shadows.

Thu Apr 11 A PRIVATE WAR (15)
2018 UK/USA 110min. Dir: Matthew Heineman
Stars: Rosamund Pike, Jamie Dornan, Tom Hollander, Stanley Tucci
Marie Colvin was an acclaimed war correspondent working for the Sunday Times. With her cameraman Paul Conroy, she entered the Syrian city of Homs, just as Assad’s forces began attacking the refugees there, and died in the consequent bombing. The film follows Colvin’s career from Sri Lanka (where she loses an eye) to Afghanistan and Libya, showing how PTSD affected her personal and professional relationships. Rosamund Pike gives a gritty performance.

Tue Apr 16 GIRL (15) (7.30pm)
2018 Bel/Neth 109min (Flemish and French with subtitles). Dir: Lukas Dhont
Stars: Victor Polster, Arieh Worthalter, Katelijne Damen
Lara is turning 16, with a loving father who has moved job and home to enable her ballet school dream. Fitting in isn’t simple – her pointe work is weak, and her peer relationships charged with curiosity, as Lara was born a boy. Her excitement at starting hormonal treatment curdles to anxiety as these stresses mount, and her desire for privacy becomes more urgent… Polster – a 14-year-old, cisgender boy – gives an astonishing, heartrending performance in this Cannes Queer Palme winner, whose realism only makes its drama more compelling.

Thu Apr 18 ON THE BASIS OF SEX (12A)
2018 USA 120min. Dir: Mimi Leder
Stars: Felicity Jones, Armie Hammer, Justin Theroux, Kathy Bates
Supreme Court Justice Ruth Bader Ginsburg has become an iconic figure, using formidable legal arguments to enshrine the rights of women and minority groups, with inspirational wit, style and charisma. In Leder’s dramatic retelling, Jones channels the balance of resilience, idealism and pragmatism that saw Ginsburg progress through a hostile Harvard Law School – where she both met her husband Marty (Hammer) and nurse him through illness – to secure ground-breaking legal reform in her first major case and change American public life forever.
* The 2.30pm screening will be subtitled for those with hearing loss 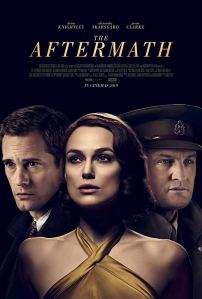 Tue Apr 23 THE AFTERMATH (15) (7.30pm)
2019 UK/USA/Ger 108min. Director: James Kent
Stars: Keira Knightley, Alexander Skarsgård, Jason Clarke
Arriving in Hamburg in the bitter winter of 1946, Rachael (Knightley) is reunited with her husband (Clarke), a British colonel responsible for rebuilding the shattered city. Their lodging is one of the grandest surviving houses – but they must share it with its previous owner, a German widower (Skarsgård), and his troubled daughter. Testament of Youth director Kent has crafted another moving historical drama, charged with enmity, grief, passion and betrayal. 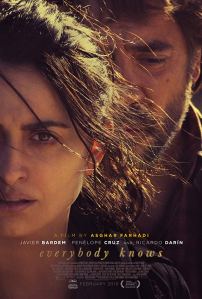 Thu Apr 25 EVERYBODY KNOWS (15)
2018 Sp/Fr/It 132min (Spanish with subtitles). Dir: Asghar Farhadi
Stars: Penélope Cruz, Javier Bardem, Ricardo Darín
Iranian, multiple-Oscar winning (A Separation, The Salesman) director Farhadi is paired with Spain’s finest in this family drama. Laura travels from Argentina to Spain with her two children to attend a friend’s wedding – but her elder daughter is kidnapped, causing a web of family secrets to be revealed. Once again, Farhadi expertly probes his characters’ complicated emotions and motivations, assisted by a fine cast that extends well beyond its star pairing.

Tue Apr 30 BORDER (15) (7.30pm)
2018 Swe/Den 110min (Swedish with subtitles). Dir: Ali Abbasi
Stars: Eva Melander, Eero Milonoff, Jörgen Thorsson
While customs officer Tina has an astounding sense of smell and a corresponding talent for sniffing out trouble, she’s shunned by most for her unconventional looks. When the suspicious looking Vore walks past her, Tina can’t figure out what he’s hiding, and the attraction and bond between them causes her to realise the truth about herself. From the writer of Let The Right One In, this is an unusual and enthralling blend of fantasy, horror and crime thriller. 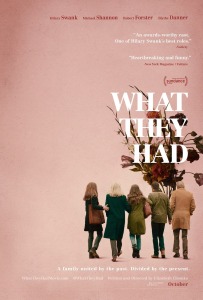 Thu May 2 WHAT THEY HAD (15)
2018 USA 101min. Dir: Elizabeth Chomko
Stars: Hilary Swank, Michael Shannon, Robert Forster, Blythe Danner
Ruth, a beloved matriarch, is in the later stages of dementia and beginning to slip away. When her daughter, Bridget, receives a call to say that her mother has wandered off in the middle of the night, she must return to her childhood home to help her brother persuade their intransigent father to seek help for his ailing wife. It is time to move forward and make peace with the past – but none of them are ready. What They Had features an outstanding cast with performances to move cinema goers to both laughter and tears.
* The 2.30pm screening will be subtitled for those with hearing loss