The conservation area around Addington Village is to be expanded to include Addington Palace, under proposals unveiled by Croydon Council this week. 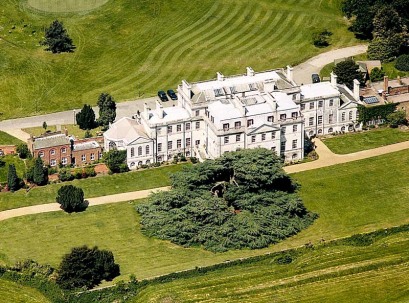 Once the residence of archbishops, Addington Palace is now to be given additional conservation protections

The Palace was built in the 18th Century, but has historic associations going back to a hunting lodge on the site used by Henry VIII, while the most recent building was the country residence for Archbishops of Canterbury throughout the 1800s.

The proposed extended conservation area would also include the former stables, built in 1829 as part of Archbishop Howley’s improvements and expansion of the palace estate, which are now part of Addington Palace golf club’s clubhouse. The grounds around Addington Palace were originally laid out by Capability Brown (though he is not thought to have had anything to do with the layout of the tricky 10th hole…).

Stable Lodge, South Lodge and Roxton Gardens will also be within the new boundary.

The council said, “Some areas where development that does not relate to the historical development of the area will also be removed.”

The former stables and Stable Lodge would also be added to Croydon’s Local List, which is made up of buildings and structures within Croydon considered by the public and council as having special local architectural or historic interest.

The council said, “The conservation area, if adopted, will become Addington Conservation Area to reflect the proposed changes and increased size. The special architectural and historic character of the expanded area would be set out in a new Conservation Area Appraisal and Management Plan (CAAMP), which also provides information about how the area should be managed in future.”

This document will become a statutory planning document.

Representations on the draft Addington Conservation Review can be made until May 30.

Paul Scott, the two-home-owning Labour council cabinet member in charge of overdevelopment, claimed that the proposals somehow reflect “our strong commitment to protecting our historic open spaces and places”.

Croydon Council holds the freehold to Addington Palace. In 2015 it handed a long lease to the golf club for a modest £1million. Why it had never occurred to anyone in Fisher’s Folly before now that a Palladian mansion less than 10 miles from the centre of London might need protection from development is anyone’s guess.

“As we see Croydon to continue to grow to meet the needs of the people it is important we conserve our history for future generations,” said Scott, the man who once claimed from the chair of the planning committee that he would willingly “concrete over” the whole of Croydon.

There is to be what the council calls “an engagement event” for the public held at Addington Church Hall on May 9, between 4pm and 8pm.

Hard copies of the document will be available for viewing in all libraries including New Addington Library and Croydon Central Library. The display from the engagement event will also be available to view in the Clocktower between May 11 and 18.

The council’s press release states: “Any comments will be considered, with amendments made where appropriate. It is likely the document will be adopted in the autumn.”

So that’s you lot told then.

News, views and analysis about the people of Croydon, their lives and political times in the diverse and most-populated borough in London. Based in Croydon and edited by Steven Downes. To contact us, please email inside.croydon@btinternet.com
View all posts by insidecroydon →
This entry was posted in Addington, Addington Palace, Croydon Council, Croydon parks, Environment, History, Paul Scott, Planning, Selsdon & Ballards and tagged Addington Palace, Addington Village Conservation Area, Paul Scott. Bookmark the permalink.

1 Response to Council to extend conservation area around Addington Palace