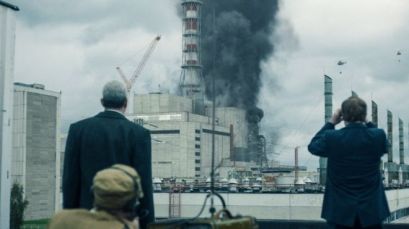 It took the public authorities several days to admit the true nature of the fire at Chernobyl in 1986. But that was in the Soviet Union, not LibDem-controlled, supposedly eco-friendly Sutton…

Stuart Collins, Croydon Council’s deputy leader, has called for an urgent inquiry into the circumstances surrounding the fire at the Beddington Lane incinerator site yesterday.

The fire took place in a sorting shed next to the Viridor incinerator. It took four fire engines nine hours to get the fire under control.

Given the urgent spin being offered yesterday by Viridor, their apologists at Sutton Council, and by the South London Waste Partnership, the four-borough body which commissioned the incinerator project, all in an effort to try to minimise the impact and dangers that had been presented by the fire, any such investigation will need to be independent of the contractors and local authorities who have spent hundreds of millions of pounds building the incinerator.

The London Fire Brigade was called out at 10.23am yesterday morning, and it took 25 firefighters and four fire engines from across south London to deal with it. Not until 7.24pm did the LFB declare that the fire was “under control”. A thick black cloud billowed up from Beddington Lane before lunchtime and smoke was visible across south London throughout the afternoon.

Residents and people working close to Beddington Lane reported suffering from asthma attacks, headaches and coughing during the afternoon.

Yet during the course of the day, Viridor and their patsies in Sutton Council’s propaganda unit variously claimed:

Sutton Council were on full-on Politburo mode in trying to distance the incident from any connection to the incinerator.

At just after noon yesterday, they tweeted this piece weapons-grade deceit: “A small fire at the bulky waste depot off Beddington Lane has been put out by the Fire Service. This was not a fire at the nearby incinerator, which was unaffected. There were no injuries and no risk to public health. Normal service has now been resumed.”

The fire brigade would be on the scene, fighting the “small fire”, for another seven hours after the council posted this.

Sutton Council’s premature ejaculation about the ‘small fire’ being ‘put out’ and ‘normal service’ being resumed. Issued around noon on Thursday, how could the council even be certain that there was no risk to public health?

The council tweet has not been removed, although when challenged, the propaganda department did issue a minor adjustment, stating that “The South London Waste Partnership…”, deftly passing the buck, “…has said that ‘The London Fire Service quickly brought the fire under control. They remain on site to monitor and manage the fire.’ That is, it wasn’t put out but is being managed. Sorry for any confusion.”

You’d think that whether there was a fire, or not, is a pretty fundamental thing to get right.

And note the use of the incorrect title of the LFB: Viridor and their PR spinners were using the form “London Fire Service” throughout the day, a clear indicator, through the smoke of deceit and obfuscation, that the contractor tail was all the time wagging the local authority dog.

An LFB photograph from inside the incinerator site this morning

There were further concerns about the sweeping assurances about any public health risk.

Given that no official knew much about how the fire started, what was the cause or even what was burning so fiercely, how could the council even be certain that there was no risk to public health?

It was also notable that not a single senior elected councillor from the Ruth Dombey-led Sutton administration made any comment at all during the nine hours or more while the fire was raging – not even for the routine and courtesy note of gratitude to the emergency services.

This spread of deliberate disinformation by a public body should be a cause of considerable concern among some at Sutton Council.

The Liberal Democrat-controlled council is, after all, the client of Viridor, together with the other members of the South London Waste Partnership – Croydon, Merton and Kingston – and their first duty of care is to their residents’ interests, rather than the reputation of a commercial contractor.

Sutton and the SLWP have already invested hundreds of millions of pounds of public cash in the Beddington Lane incinerator, for which Viridor has a contract worth £1billion to burn rubbish for the next 25 years. Yet the £210million incinerator, which was due to be on-stream by August 2018, is still not fully operational.

Yesterday’s “small fire” is likely to prove a further set-back.

It is also reckoned to be at least the third fire at a Viridor plant in the past 12 months.

Which probably explains the eagerness of those in the pay of Viridor to deflect and divert attention from the incinerator.

Viridor spend a small fortune with central London public relations firm Madano, and in return receive the loyal services of chief spin doctor, Andrew Turner, who describes himself as a “reputation and communications consultant. Specialising in the management of crises, risk and issues”.

Yesterday, with fire raging alongside his clients’ £210million incineration plant, Turner couldn’t be bothered to answer Inside Croydon’s questions about the nature of the fire or the welfare and safety of the workers at the plant.

But Madano Man was quickly on the phone to point out that “the fire is not at the incinerator, but at the waste transfer centre”.

This waste transfer centre, Turner said when pressed, is “co-located” with the incinerator. Although for some reason, Turner could not allow the word “incinerator” to pass his lips, and instead insisted on calling it an “energy recovery facility”. Not that much energy was being recovered yesterday.

Yet Inside Croydon has learned that the fire did not occur in the recycling centre, co-located or otherwise. LFB photographic evidence and reports appear to confirm this.

In fact, the fire took place in the incinerator’s sorting building. Here, waste destined for the incinerator is sorted into flammable and non-flammable material. It is nothing to do with recycling at all, as Turner and Sutton Council tried to claim.

The sorting building is a stage of the incineration process used by Viridor since a gas cylinder found its way into its Heathrow incinerator. The subsequent explosion put that incinerator out of action for six months.

It has further been suggested that there were no sprinklers fitted in the sorting building – Viridor had looked to save on their costs by not having the safety feature fitted, and Sutton Council acquiesced by not insisting on sprinklers during the planning process.

While Sutton LibDems were keeping a low profile while the fire was ablaze, other local politicians did choose to remark on the way the council was recycling Viridor’s rubbish PR: “Looking at all the close-up photos, this attempt to reframe the issue looks pretty unwise,” said Labour’s Charlie Mansell, a former councillor in Sutton.

“It is the same company, same contract, same building and, one assumes, all waste processes are integrated. If that building has fire risks and is handling toxic and radioactive waste, London Assembly members plus Sutton Councillors should be calling for a full investigation in conjunction with the London Fire Brigade,” Mansell said.

According to the London Fire Brigade this morning, “A pile of mixed household waste was destroyed by the fire and a single-storey waste unit was damaged. There were no reports of any injuries.

“The cause of the fire is under investigation.”

Stuart Collins: will his SLWP discussion be enough?

That latter statement puts Viridor’s hasty efforts yesterday to put the blame for the fire on Lithium batteries that had not been sorted by the public from their household waste as both premature and also another example of how the company is endeavouring to deflect all blame away from their own on-site practices at the incinerator.

Croydon councillor Collins, who recently began a term as the chair of the South London Waste Partnership, has promised some action, although given the hand-in-glove relationship between Viridor and the SLWP, it is unlikely to have the benefit from any true objectivity. Indeed, it almost seems as if Collins is prepared to allow Viridor to mark their own homework.

Collins said, “As chair of SLWP I have already asked for the incident to be discussed at the next SLWP [meeting].

“I would also expect the result of any investigation and any conclusions to be shared with each borough’s relevant cabinet member as soon as possible after the findings are known.”