It’s a fair cop: we need more police officers on our streets

Posted on April 4, 2013 by insidecroydon

CROYDON COMMENTARY: Closing police stations would be fine if London Mayor Boris Johnson really did put the money saved and raised into officers on the streets, says DAVID CALLAM

It’s a fair cop, Mr Mayor: time to come clean about Greater London’s police numbers and why Croydon has fewer officers on the beat now than it did before the riots.

Boris, how dare you attempt to deceive us by trying to disguise replacing natural wastage as recruitment? That’s the action of a con merchant, not a responsible elected official.

I’m delighted to see that your shady use of statistics is being closely observed. Long may it continue.

Honestly. The idea that the nation’s capital can make do with the same number of police officers in a period when the population is growing is ludicrous and should be exposed on every possible occasion.

Even with the present budgetary constraints, we could increase the police presence on the streets of Greater London merely by replacing retiring warranted officers with PCSOs, thereby getting more bang-ups for our buck.

Such a move would be vociferously condemned by the Police Federation: well they would say that, wouldn’t they?

A PCSO is just as capable of using a radio to summon assistance. Granted, there are things that can only be done by a warranted officer at present, but regulations could be changed if politicians would stop genuflecting to the Federation.

Like unions representing teachers and train drivers, there is no pleasing the Fed – and like the National Union of Mineworkers, it will be the architect of its own downfall.

Boris reduced the Greater London Authority precept this year – maybe to support his circuitous campaign to become Tory party leader. It might have been more statesmanlike to leave the precept where it was and to spend the extra money on a real increase in police numbers. 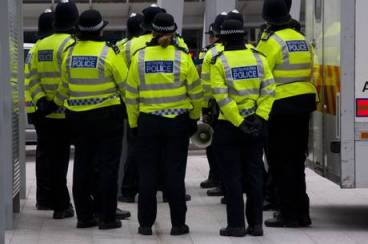 Evening all: “modern policing”, but it is hardly Dixon of Dock Green

We need more bobbies on the beat. There are aspects of Dixon of Dock Green that should never have been discarded. As a child I watched the show avidly. I can still remember scenes of foggy London, with dear old George remorselessly pounding a beat he knew well enough to sense if anything was out of place.

We abandoned all that for the Z Cars approach, Fancy Smith and Jock Weir in flashy Ford Zephyrs or Zodiacs trying to emulate their American cousins. Fast response, supposedly, but more remote from the public.

And that led us to The Bill: you’ve seen them in central Croydon; PC Tony Stamp lookalikes, pot-bellied coppers who couldn’t run after a fleeing mugger if their life – or yours – depended on it.

Many of us have been saying for years that we need a more visible uniformed presence on the street. We have been told our ideas are quaint, that we are just being nostalgic.

But we, the public, can see the true value of a copper who knows an area intimately – a trusted figure with good contacts who can often anticipate problems. Even after a crime has been committed, a dedicated neighbourhood beat bobby who understands the importance of good intelligence is often able to point his detective colleagues in the right direction.

But I do not understand the clamour to retain police stations.

I remember when an ordinary copper’s only two means of communication were his whistle and his key to a police box (for the benefit of younger readers, a police box is a structure now used solely by “The Doctor”).

In those bygone days, most of the population had no direct access to a telephone. Now we have more phones than people.

Police stations are an anachronism. I’ve heard it suggested that they only survive because they give police officers a place to hide.

I have had the misfortune to be burgled three times in the past three decades. I have reported each instance promptly – by telephone.

If I happen to witness an accident or a crime being committed, I will follow what is now common practice and summon the police – by telephone.

I have no need of a police station unless I am asked to assist with enquiries or to produce documents. In either case, it’s not an emergency. 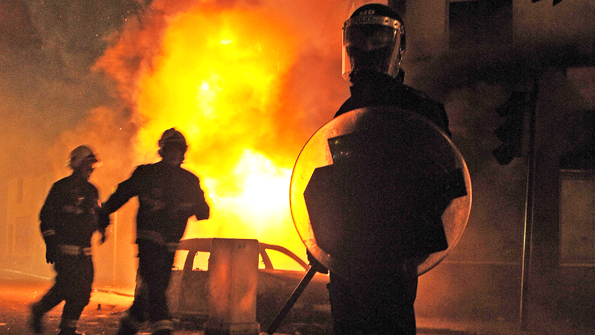 Rapid response? Police were no quick enough to help to save Reeves Corner in the 2011 riots

The riots of August 2011 frightened me as much as anyone else. I watched the destruction of House of Reeves live on national television. I saw the blitz-like pictures of a blazing London Road.

On the morning after, I looked aghast at the looted off-licence just around the corner from my home and at the sacked shops along South End. I have read the reports that followed this dreadful breakdown in law and order. None of the problems relates to the proximity or otherwise of a police station.

Reeves is only a few minutes’ drive from central Croydon’s station, but the response time was so poor that the building was left to burn because no police were available to provide the necessary security for the fire service.

London Road, West Croydon, is equally close to the station, but I’m told a valiant few British Transport Police were left to hold the thin blue line there.

Meanwhile, police reinforcements from all over the country – warranted officers every one – were cooling their heels in mini-buses in car parks across Greater London because their radios were incompatible with those of Gold Command.

When it really mattered, the closeness of a police station made no discernible difference. The absence of a substantial mobile force most certainly did.

I can see an argument for a “cop shop” in central Croydon. Site it close to rail and bus stations, and multi-storey car parks. Open it every day – 24 hours, if necessary. Locate it with other services – like a walk-in accident and emergency clinic.

But separate the cop shop from motorised units. Let CID, crime cars and others share premises with ambulance and fire services in a lesser number of locations specifically chosen to allow them all to improve their response times.

The Metropolitan Police Service is about to dispose of a large amount of real estate in the form of police stations and other buildings. Mr Mayor: would you commit to putting that money into additional officers on the beat? And most of it to increasing the number of PCSOs rather than their more expensive PC colleagues?

That might result in real improvement in the crime clear-up rate and genuinely safer streets, rather than a mere fiddling of the figures.

News, views and analysis about the people of Croydon, their lives and political times in the diverse and most-populated borough in London. Based in Croydon and edited by Steven Downes. To contact us, please email inside.croydon@btinternet.com
View all posts by insidecroydon →
This entry was posted in Boris Johnson, Crime, Croydon 8/8, David Callam, London-wide issues, Mayor of London, Policing and tagged Boris Johnson, British Transport Police, Croydon, Greater London, London, Police, Police community support officer, United States. Bookmark the permalink.

5 Responses to It’s a fair cop: we need more police officers on our streets