CROYDON COMMENTARY: So, the centre of town has a traffic congestion problem. Who knew?

One of Westfield’s early “visualisations” of its scheme for Croydon. Funny how the roads are highlighted…

Could last week’s announcement of the delay in Hammersfield delivering the  planning application for its proposed £1.5 billion shopping mall be the start of more planning blight for Croydon?

Or worse, might it leave us with another “Wastefield” as suffered in Bradford?

Much of the clamour around the re-development of Croydon town centre so far has been a case of jam tomorrow, but last week’s announcement of a three-month delay in submitting detailed planning application by the “Croydon Partnership” was out of fear of jams tomorrow.

If the Australian developer Westfield delivers on its promises with its partner, Hammerson, one day Croydon could be the home of the largest of Greater London’s 21st century shopping malls, completing a consumer triangle with Westfield’s other schemes at “Stratford City” and White City.

That’s the theory. The practice may need a little more work.

Stratford and White City are surrounded by four-lane dual carriageways connected directly to motorway-standard roads – the A12 and Westway.

Central Croydon is not attached to anything: its inner ring road, our very own Magic Roundabout, has never been completed and therefore feeds into roads that are not wide enough to take the present weight of traffic, let alone what might be generated by a successful town centre with a carefully managed PR image.

Stratford and White City both have integrated car parks with capacities of 5,000 and 4,500 respectively. Croydon can easily handle such numbers, but only by including spaces further afield.

Adjacent car parks at Allders (583), Centrale (950) and the Whitgift Centre (1,059) have barely half the parking capacity enjoyed by either of the existing Westfield-owned centres in London.

It is debatable whether developers will want to rely on car parks at Dingwall Road (664), Fairfield (1,371), Surrey Street (685) or Wandle Road (1,021). They are too far away from the Hammersfield centre, allowing potential shoppers to stray.

No doubt the developers can incorporate extra places into the new design.

Croydon City, if that’s what we learn to call it, will need to be linked to the A22 and A23 by a road with the capacity to cope with the traffic the shopping mall generates. That will mean at least two lanes in either direction with flyovers and underpasses to keep the traffic moving.

There are persistent rumours that Hammersfield is ready to invest in junction upgrades at Fiveways and Purley Cross. That would be helpful, but not enough.

I remember the opening of Ikea in Valley Park. Aerial pictures showed congestion stretching back to the M23. The grossly inadequate Purley Way and many of the roads around it were stationary, traffic had ground to a dead halt.

It may not be that bad every day, but there will be regular congestion of that order throughout the year, unless we do something to prevent it. 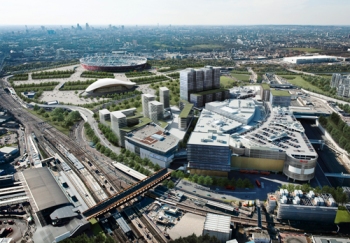 Westfield’s most recently completed London mall, at Stratford, is surrounded by motorway-standard roads

I’m a strong advocate of park ‘n’ ride and I think we could make good use of the train (north/south) and the tram (east/west), but I can’t see the developers investing £1 billion – or is it £1.5 billion? When Boris mentioned Croydon last month, the “boast” investment figure had crept up to £1.6 billion – on the vague promise and hope that public transport will take the strain.

The car is the main means of travel to and from the shops and is likely to remain so for the foreseeable future, so we must find ways to cope with the added volume, because developers are unlikely to accept our inadequate road network, or even a tarted up version of it, as a satisfactory solution.

There was a plan, a few years ago, to link central Croydon to a Fiveways gyratory with a dual carriageway along Duppas Hill Road, but residents were unhappy. Waddon was (and still is) a marginal ward. The majority party was scared of losing control of the council as a result.

We have some serious decisions to make and not very much time in which to do so. Any suggestion of widening the Purley Way, which is already full to bursting, will bring howls of protest from certain quarters.

But we can no longer fudge this decision. The multi-million pound commercial investment will not be on offer indefinitely. Developers could as easily spend their money elsewhere in south London. And if they do, central Croydon will cease to be a shopping or office centre of any consequence.

If the council goes into dither mode, it will embarrass the Mayor of London, Boris Johnson, who has brokered this deal. If he and the developers decide to build elsewhere, property prices in central Croydon will plummet.

And that would leave Croydon Council, its partners John Laing and other significant land owners, including the Whitgift Foundation, high and dry.

For that reason I believe the local and regional authorities will do whatever it takes to secure the long-term presence of Hammerson and Westfield in central Croydon. On balance, I think that’s the right decision, though I concede there could be a sizeable number of people who see it differently.

News, views and analysis about the people of Croydon, their lives and political times in the diverse and most-populated borough in London. Based in Croydon and edited by Steven Downes. To contact us, please email inside.croydon@btinternet.com
View all posts by insidecroydon →
This entry was posted in "Hammersfield", Business, Centrale, Croydon Council, Ikea, Planning, URV, Valley Park, Waddon, Whitgift Centre and tagged Croydon, Hammerson, London, Purley Way, Stratford City, Westfield, Whitgift Centre, Whitgift Foundation. Bookmark the permalink.