Posted on December 5, 2013 by insidecroydon

A beautiful, seasonal Christmas festival. Pictured above, though, is Nuernberg in Germany, where such winter feasts have been staged for centuries, in town squares, all well-lit and with Gluehwein and sausage to warm the cockles.

Which is not quite the same in Lansdowne Road, hard by the London to Brighton mainline and Croydon’s latest claim to infamy, the Bridge to Nowhere. 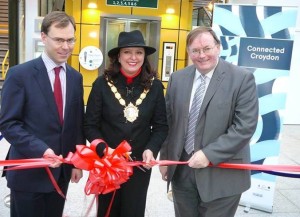 Croydon’s Mayor, Yvette Hopley, together with Chris Burchell, the managing director for Southern Rail, left, and florid-faced Mike Fisher, the leader of the council, cut the ribbon to open the new pedestrian bridge at East Croydon. At the western end. The eastern end remains firmly unconnected

The wretched weather did not help, for certain, but the “celebration” staged tonight by the council’s favourite PR agency, Grey Label, looked as half-arsed as ever and a wanton waste of public money – money which has been taken from the riot recovery fund which many had expected to be used to help those affected by the looting and arson of August 2011.

Instead, Croydon’s Conservative-run council decided to spunk tens of thousands of pounds away on a 21st century version of “bread and circuses”.

Trouble was, Grey Label had failed to effectively publicise the event, or the people of Croydon were simply disinterested in what was on offer – not more than 20 stalls, if that, some offering food, some offering goods to the handful of passers-by along a closed road where hours earlier, a large team of contractors had been patching over broken pavements and trying to finish off incomplete road works.

“There’s more atmosphere on Surrey Street on an ordinary wet weekend,” was the view of one middle-class lady shopper.

Inside Croydon’s trainee, DANNIE LIEBOVITZ was sent out on assignment for a second photo-gallery of the day 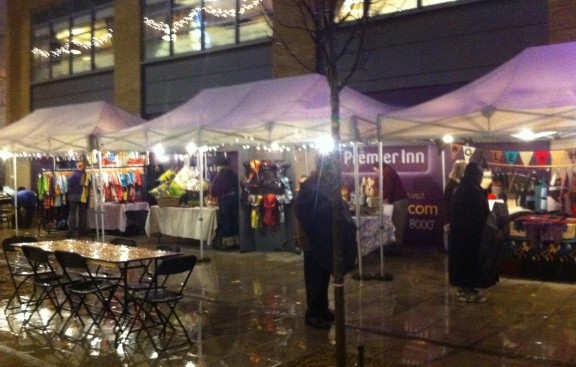 Not the most inviting of scenes? Few people chose to brave the weather to sample the Connected Croydon festival