96 days to go and councillors’ self-interest is showing

Have you had someone with a rosette knock at your door yet? You will, says WALTER CRONXITE, you will. Though how the tax-payers of Croydon will benefit from one of the longest election campaigns in history is questionable

Gavin Barwell, MP for the Whitgift Foundation, out on the knock in Addiscombe last weekend, with the help of several publicly funded ‘friends’

Fed up with the election campaign yet?

The political chatter this week has been of “100 days to go” until General Election day on May 7. One. Hundred. Bloody. Days.

Gone are the days of “snap elections” and one-month campaigns. We should blame the LibDems, who on getting into government for the first time in a century have inflicted upon the rest of us fixed-term parliaments. Hey presto, we have a “Zombie Parliament”, which started running low on its legislative programme a year ago.

With our MPs under-occupied, we now have this over-stretched charm offensive inflicted upon us.

And so much of it is being subsidised, if only indirectly, by… the tax-payer.

The political class enjoys nothing better than an election campaign, especially if someone else is paying.

Take, as an example, the photograph above, from last weekend, when the Conservative MP for the Whitgift Foundation, Gavin Barwell, was out and about in Addiscombe, trying to convince people in January of how they should vote in May. “Record number of people out canvassing today,” he said, as if it was something of which to boast that so many people did not have something more productive to do with their time.

We reckon that there’s 35 people in the Tory picture, plus the photographer.

Of them, we can identify (from the left):

The second group, to the right of the picture, is more clustered together, and therefore more difficult to identify. However, we believe that also inflicting themselves on the people of Addiscombe last weekend include:

It’s reasonable to surmise that these attendees were not running ward surgeries last Saturday morning to hear the problems of or to assist the residents in their Conservative wards.

What does any of this do to benefit ordinary Croydon residents and the borough as a whole? It’s hard not to suggest nothing whatsoever. And there’s still another three months of this to come.

In addition to Creatura, Bashford, Bennett and Arram, Barwell also employs another two in his office, all paid for out of our taxes, and we can assume that for the next 13 weeks these public servants’ activities will have an increasing focus on getting their boss re-elected – and keeping themselves in a job, too – rather than on real constituency demands. 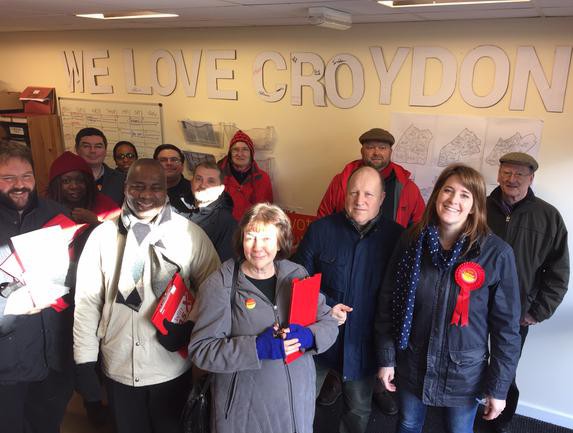 Same day, same schtick, different political party: this was Sarah Jones’s Labour canvassing group pic from last weekend. Only three people in this photo are not paid Croydon councillors – one of those is the candidate and another his her constituency party secretary

That, of course, is an important part of the benefits of an MP’s incumbency. It can be self-perpetuating. No other candidates in Croydon Central will have the help of six staff, as well as their party-funded election agent, as Barwell does. And if you are a local councillor, your own prospects (and therefore, allowances) are often much-improved if you have the backing of someone from your own party as the local MP.

The Tories are not alone in this long campaign game, of course.

Social media has a lot to answer for: even if you’re lucky to miss the political classes arriving on your doorstep like a bunch of less-well-dressed Mormons, your Twitter timeline can’t escape another cheery picture of canvassers ready to proselytise for their favoured candidate.

When Sarah Jones, Labour’s candidate in the Croydon Central constituency, had her obligatory group shot done on the same day as her Tory rival, it showed 13 people. Ten of them are serving Croydon councillors, and four of those are cabinet members, receiving up to £4,435.25 per month in council allowances (in the case of council leader Tony Newman).

Of the three non-councillors in the picture, there was Jones herself, David White, the constituency party secretary, and Margaret Wicks, widow of the late MP for Croydon North.

Of course, it was a Saturday, and they are all entitled to do what they like in their own time. But isn’t it very telling that so few people pictured are “ordinary” party members, or local residents, out on the streets simply out of conviction rather than, possibly,  unenlightened self-interest?

The election campaign will see an awful lot of time and energy being expended by our elected representatives, and to what real end? To whose advantage?

And to think there’s “just” another 96 days to go…

*Profuse apologies to anyone we missed or didn’t manage to identify. Barwell really ought to employ someone with better photography skills. If you are an activist or a councillor in the picture and we haven’t managed to name you, do please get in touch