Blukip strategy is paying off as Barwell takes 4% poll lead

And then, at the last, like the US cavalry riding over the hill to the rescue, Gavin Barwell’s old boss, Lord Cashcroft, pulls out a poll to say that the Tories will hold Croydon Central. 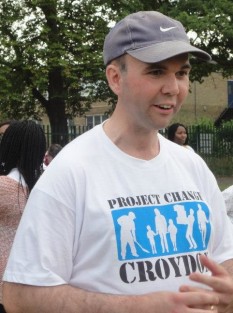 Gavin Barwell: getting his head in front

Ashcroft published the results of his polling on 10 Conservative-Labour marginals this afternoon, showing for the first time in months that Barwell is ahead of his rival, Sarah Jones, by 4 per cent. That’s a complete reverse of the standings from Jones to Barwell in just the past month, based on Ashcroft’s own polling.

Billionaire Tory donor Ashcroft – someone who has such an ego that his is surely the only byline to include after his expensively acquired title the letters “KCMG PC” – has transformed election polling in Britain, investing heavily in constituency-focused telephone surveys.

Last October, the Ashcroft poll on Croydon Central had Jones 6 per cent ahead and the mother-of-four seemingly set to become Croydon’s first woman MP.

This latest poll, published on the Conservative Home website, was conducted earlier this week. It will be a stunning blow to morale within Jones’s team in their converted shop headquarters on Cherry Orchard Road, after a long and ultimately gruelling campaign.

Ashcroft describes the Croydon Central poll result as “the most striking” of the final batch of marginals he has been surveying.

And he attributes the turnaround to the utter collapse of support for UKIP, who as Inside Croydon first reported, have admitted that they have all-but abandoned campaigning against Barwell.

“The UKIP share in the seat has nearly halved, from 19 per cent to 10 per cent, since the October poll,” Ashcroft notes.

These are UKippers who are “coming home”, as David Cameron likes to put it, and will vindicate Barwell’s Blukip strategy in which he has espoused some UKIP policies, issued purple-coloured leaflets, and avoided whenever possible mentioning that he is from the Conservative Party.

The Ashcroft poll – a “snapshot, not a prediction” his Lordship is at pains to remind us – comes soon after whispers from Katharine Street that suggest there may have been some surveying of the postal votes for Croydon Central – something which, if true, would be strictly against the Representation of the People Act.

The Tories have long been well-organised at getting their core support to vote by post, and our Town Hall mole has suggested that Barwell could already be 2,500 votes ahead, before a single X has been etched on to a ballot paper in a polling station on election day.

If that is true, in a seat in which all previous predictions suggested that the outcome could be measured in dozens, rather than hundreds, of votes, then Jones and her team have a lot more canvassing to do over the Bank Holiday weekend to make up the deficit.

News, views and analysis about the people of Croydon, their lives and political times in the diverse and most-populated borough in London. Based in Croydon and edited by Steven Downes. To contact us, please email inside.croydon@btinternet.com
View all posts by insidecroydon →
This entry was posted in 2015 General Election, Croydon Central, Gavin Barwell, Sarah Jones MP and tagged Barwell, Conservative, Croydon Central, Gavin Barwell, Labour, Liberal Democrats, Sarah Jones MP, Tory, UKIP. Bookmark the permalink.