Ex-councillor says he was ‘coerced’ on incinerator decision

Posted on September 16, 2015 by insidecroydon

The chairman of Sutton Liberal Democrats could face criminal prosecution if a complaint that he sought to interfere with the Beddington Lane incinerator planning process can be proved.

Former LibDem councillor Stephen Fenwick: claims to have been coerced into changing his vote

Former Sutton councillor Stephen Fenwick has issued a statement which makes the serious allegation that John Drage and another LibDem party colleague approached him to change his vote from opposing the £1 billion Viridor scheme to supporting it at planning committee meetings in 2013.

Fenwick’s changed vote helped give the go-ahead to the controversial scheme which will see more than 300,000 tons of rubbish trucked through Croydon every year, to be burned at the Beddington plant.

Fenwick’s complaint is now subject to investigation by Sutton Council.

Drage, who is no longer a councillor, was previously one of Sutton’s representatives on the South London Waste Partnership, the four-borough body, which includes Croydon, which awarded the 25-year deal to Viridor.

Tonight at Sutton Council, its Standards Committee will consider whether to order an independent inquiry into how Viridor’s charity arm, Viridor Credits, came to make a £275,000 gift to Holy Trinity church in Wallington, which is used by local LibDems, including MP Tom Brake, for meetings and is regularly attended by John and Elaine Drage, who used to work as a senior civil servant at the Department of Trade and Industry.

The guidance provided by the Local Government Association, based on the Nolan Principles for conduct in public office, make it very clear that lobbying of members of planning committees is not allowed, and that planning decisions should never be “whipped” along party political lines. 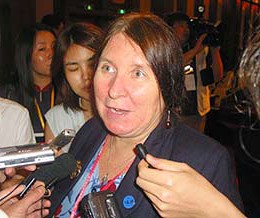 The failure to disclose a pecuniary interest is a criminal offence which can lead to fines of up to £5,000 and disqualification from holding office as a councillor for five years, something which won’t bother John Drage, who retired from elected office last year. In any case, Drage argues that the gift to his favourite church had nothing whatsoever to do with the Viridor planning decision.

Inside Croydon originally reported Fenwick’s complaint that he was coerced into changing his vote six months ago.

At the first planning committee meeting, staged on April 24, 2013, the scheme failed to achieve a majority in favour, when two Conservatives, plus Fenwick, then the LibDem councillor for Worcester Park ward, voting against.

When the committee was hurriedly reconvened less than a month later, Fenwick opted to vote in favour of the scheme, along party lines, as did Monica Coleman and Margaret Court, LibDem councillors who had been so bold as to abstain at the previous meeting.

Anti-incinerator campaigners, using audio from the meeting, ridiculed Fenwick’s change of mind with this cartoon:

No satisfactory explanation has ever been offered over what changed the three LibDem councillors’ minds on the issue.

But Fenwick has now lodged a written statement which maintains he was lobbied on party political lines by John Drage and Councillor Colin Hall, the second Sutton LibDem to sit on the SLWP committee. Hall died earlier this year.

In his statement, seen by Inside Croydon, Fenwick says that at the time of the first planning meeting, he “was against the facility on the grounds of air pollution and environmental issues.”

Naming John Drage and Colin Hall, Fenwick said: “I was coerced into voting for planning permission to be granted by these two councillors. I was informed that if planning permission was not granted, the council would lose vital funding from Viridor, waste management services in the borough would be plunged into doubt and I could receive a hefty sanction, namely the whip suspended and removed from the Liberal Democrat group.”

This conduct, if proven, would be a clear breach of rules on councillors’ conduct.

Fenwick described Drage and Hall’s conduct as “manipulative and forceful”.

Fenwick says he underwent “a high level of stress and embarrassment” as a consequence of his change of heart. “I personally hold John Drage responsible for the suffering I endured in public from having been forced into changing my vote regarding the Beddington incinerator.”

Ahead of tonight’s Standards Committee meeting, Sutton Council has already decided that there is no case to answer over the planning committee decision, John Drage and his role on the SLWP, and the Viridor Credits’ “gift” of £275,000 to Drage’s favourite church.

News, views and analysis about the people of Croydon, their lives and political times in the diverse and most-populated borough in London. Based in Croydon and edited by Steven Downes. To contact us, please email inside.croydon@btinternet.com
View all posts by insidecroydon →
This entry was posted in Business, Croydon Greens, Environment, London-wide issues, Outside Croydon, Refuse collection, Stephen Fenwick, Sutton Council, Waste incinerator and tagged Beddington Lane incinerator, incinerator, Liberal Democrats, Sutton Council. Bookmark the permalink.