Posted on September 26, 2017 by insidecroydon

It’s as if nothing has happened in Croydon over the past 15 years, if the website of the Guildford-based Croydon Sadvertiser is anything to go by. 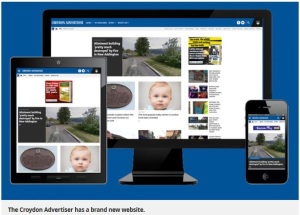 How the Guildford-based Sadvertiser is promoting its new website today

The non-local paper, which abandoned its home town in 2013 to save a few bob on office rent, has re-launched its website.

But it has carried over very few of its back catalogue of news articles from the last 10 to 15 years to the shiny new home on the web.

A chirpy message from the current editor, Andy Worden, is just a tad misleading. “You’ll still find all the same great content, news stories and local information,” it claims, inaccurately, “but we’re bringing it to you in an even better format.”

With its offices now based 22 miles away in deepest Surrey and only a shared desk at the Croydon Council-backed PR company Grey Label for a reporter, the Sadvertiser’s newspaper circulation is down to below 7,000 sales each week. This for a title which as recently as 2010 was distributing 70,000 copies.

Accused of being wedded to click-bait, driving online traffic with less-serious journalism, this has been demonstrated in recent weeks, when coverage of the council’s “inadequate” Ofsted report on children’s services only made it to page 7 of the newspaper, yet a puff piece about a property programme was somehow regarded as front-page news.

Get the message? The Sadvertiser has abandoned thousands of articles in its website switch. This is the message it provides if you are looking for them

Today, if you search the newspaper website for its reports on the disappearance and murder of Tia Sharpe in 2012: nothing.

If you look on the Sadvertiser site for its coverage of the drug-driving legislation which it helped champion, known as Lillian’s Law: zero.

Want to reference the Sadvertiser’s coverage of the 2011 Croydon riots: don’t waste your time.

Glenn Ebrey, a former editor, gave his view on social media: “The new Advertiser website looks great but this aspect is depressingly short-sighted.”

And his former chief reporter, Gareth Davies, spent much of this morning venting his displeasure on Twitter.

“Extremely disappointing that, as of this morning, majority of Croydon Advertiser story archive has been taken offline with launch of new website,” Davies said, before listing his journalism career highlights, none of which are any longer available on the interweb.

“Understand relatively small number of ‘high traffic’ stories have been transferred, but most of what was written over 10-plus year period gone,” Davies wrote.

After listing his own prized back-catalogue, the modest Davies tweeted: “That’s just handful of major public interest stories that are no longer accessible to the public.

“Not to mention hundreds, likely thousands, of other public record stories – local history – people can no longer access online.”

Davies, who flounced out of his job at the Sadvertiser being extremely criticial of its editorial approach after years of defending its conduct, appears to have taken the website changes personally: “Seemingly everything I wrote over eight years has been removed, along with the vast majority of everything we did as a paper.

There’s a strong chance, as Davies observes, that a similar thing could happen to every local newspaper website owned, as the Sadvertiser is, by Trinity Mirror through their Local World operation.

But then, that’s because this is exactly the kind of thing that has happened on numerous titles over the last three decades when there’s been significant server changes, “up-grades” or re-designs. Unless the publishing company’s management opts to spend huge sums on staffing to transfer its old content on to a new system, then the back-catalogue of articles is usually lost from the web.

All of which just means that anyone who does need to do some local research will be even more dependent on the newspaper archives at their public library, or reliant on the national newspaper archive at Colindale – both involving the kind of work which takes a touch more effort than simply calling up Mr Google.

News, views and analysis about the people of Croydon, their lives and political times in the diverse and most-populated borough in London. Based in Croydon and edited by Steven Downes. To contact us, please email inside.croydon@btinternet.com
View all posts by insidecroydon →
This entry was posted in Croydon Advertiser, Local media and tagged Croydon Advertiser, Croydon Sadvertiser, Gareth Davies. Bookmark the permalink.