How Bedlam is being transformed through arts and walks

Posted on January 8, 2018 by insidecroydon 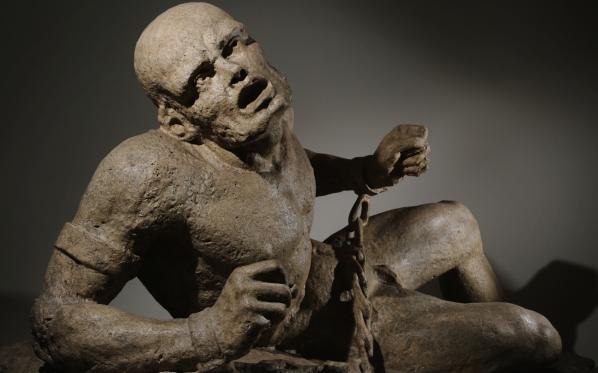 The statue ‘Raving’ in the foyer at the Royal Bethlem Hospital, and which encapsulates much of the horror and misery of the institution’s history

WANDLE WANDERINGS: Not for the first time, KEN TOWL’s gone off the beaten track. And with good reason

Bedlam, said Colin Gale, has become a byword for chaos, a symbol of suffering and confusion. Gale, the multi-qualified archivist at the Museum of the Mind, was just beginning his Saturday midday tour.

The Royal Bethlem Hospital as it is today, off Monks Orchard Road

The museum lies within the grounds of the Royal Bethlem Hospital on Monks Orchard Road which, since 1930, has been the location of the original “Bedlam”.

Established in 1247 in Bishopsgate, Bedlam was the first institution in England dedicated to the care of those with mental illness.

It has had a couple of other homes since then, and more than one name. Even the hospital’s correct, modern title, “Bethlem” is a corruption of the full spelling of Bethlehem, the name arising from its Crusader era origins.

But it is in the bastardisation of the institution’s name, which in the 19th century was located in what is now used as the Imperial War Museum in Southwark, which has created a word of crueller meaning, and which has stuck in the language: the park in which the war museum stands is still known locally as “Bedlam Park”.

Because Bedlam, of course, has become a byword for the cruelty and ignorance of those who would visit out of curiosity, often paying an entrance fee to do so, and encouraged by the hospital, to mock and make fun of the patients.

The museum was opened by Grayson Perry, who would enjoy some of the art work displayed

On his guided tour, Gale spoke pertinently to this, elegantly drawing a comparison and contrast with the role of the museum today. Once again (since March 2015, in fact, when the museum was opened by Britain’s new most popular artist, Grayson Perry), visitors are actively encouraged.

The difference, however, is that the voice of the service-users has been brought to the fore.

Thus, we hear the testimony of Alison, a service-user in the 1970s, who says, “Being in a padded cell isn’t very funny. You have to just pee on the floor or in the gutter around the edges of the walls… people scratch words out with their nails on the walls which are made of a soft rubbery stuff. I wrote ‘Nurse Prentice is a butterfly’ and she wasn’t at all pleased.”

If the term “service-user” jars, that might be because we are still getting used to it. Terminology is important.

Indeed, the lament of the psychiatrist Aubrey Lewis decorate the walls of the museum: “The words of psychiatry are often unjust stewards, sorry guardians of meaning, workers of deception”.

Gale hinted at an ongoing debate around the use of such words a s “patient” – less fashionable these days since it suggested lack of agency – while “survivor” was preferred by others.

In fact, the term “survivor” seems particularly apt in the case of the creators of the temporary exhibition “The Art of Recovery”, the result of art therapy sponsored by the Royal British Legion.

The resulting sculptures by service personnel with Post-Traumatic Stress Disorder are viscerally moving. The exhibition is only there till February 24. See it if you can.

One in four of us will at some point face mental illness. The Museum of the Mind gives us all an insight into a world which affects people close to us and perhaps goes a little way to destigmatising it. The hospital grounds go a little further.

The arts therapy building is colourful and well worth a look

The grounds, which contain a few clues about the grand house which previously occupied the site, are extensive and open to the public and used, it appears, by only a few local dog-walkers.

They include a church, a café which is open to all, and an art therapy building, the western wall of which alone is worth a visit.

Go for a walk in the grounds and you will find that Bedlam, these days, means tranquility.

The Museum of the Mind at the Royal Bethlem Hospital and its grounds are easily reached from central Croydon. Buses 119, 194 and 198 got from East Croydon to Monks Orchard Road.

The opening times are 10am to 5pm on Wednesdays to Fridays and on the first and last Saturdays of the Month. There are tours at midday on Saturdays, and they are free.

News, views and analysis about the people of Croydon, their lives and political times in the diverse and most-populated borough in London. Based in Croydon and edited by Steven Downes. To contact us, please email inside.croydon@btinternet.com
View all posts by insidecroydon →
This entry was posted in Environment, Health, History, Ken Towl, Walks, Wandle Wanderer and tagged Bedlam, Ken Towl, Museum of the Mind, Royal Bethlem Hospital. Bookmark the permalink.