WANDLE WANDERER: Going just off the beaten track once again, KEN TOWL embarks from East Croydon and to check out another multi-park walking route for the weekend

I found myself on a grey March morning standing on Platform 6 at East Croydon station standing at the nowhere end of the Bridge to Nowhere.

The edifice, built at a cost of £22million, has been dangling in mid-air for six years now, incomplete, going nowhere (at least, not on the Addiscombe side of the tracks). It ends abruptly over the station, a fitting tribute to the Conservative council that was among the public bodies that commissioned it, given that the Conservative council itself ended abruptly a short while later in the local elections of 2014.

My wait for the train was brief, my journey also short. After five minutes I alighted in the leafy suburbs around Purley Oaks Station, where the houses are detached and have names like “Lindisfarne”, “Redroofs” and “Woodbridge”.

This is where our latest multi-park walk begins. 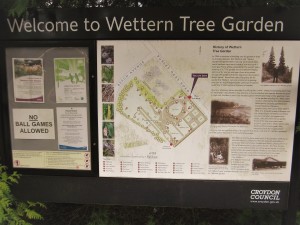 Start your walk by discovering this relatively undiscovered gem

Leaving the station on the “down” platform side, you encounter Purley Oaks Road straight in front of you.

Follow if for about a quarter of a mile until, just past the austere-looking redbrick St Mary’s Church and a mock-Tudor Montessori school, you find the entrance, on your right, to Wettern Tree Gardens.

According to the noticeboard at the entrance to the gardens, they were established by Eric Wettern who, after returning home from the First World War, established, built up and maintained a collection of trees, a good many of them from seed collected during numerous trips to the United States.

In 1965, the gardens were handed over to Croydon Council, who with the help of a bunch of volunteers, continue to maintain them.

Like most Friends’ groups, they are on the look out for more help. If that might be you, contact them via Joy Gadsby (Friends’ Convenor) on 020 8657 0831 or biodiversity@croydon.gov.uk. 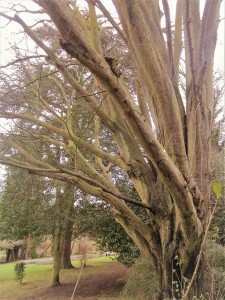 The pyramidal hornbeam is an impressive, unusual tree

The trees include various redwoods from California, the Kentucky coffee tree and a pyramidal hornbeam which, according to the informative sign below it, is: “Similar to the common hornbeam, but with an upright habit”.

Meanwhile, we learn also that the oil extracted from the Himalayan Bhutan pine was “once used as an insect repellent by workers in the rice fields”. They don’t teach you that at school.

Continue walking through the tree gardens, and as you reach the far end, there is an entrance to Purley Beeches.

This is another open space which is looking for more “Friends”. If you are interested, you could contact Stanley Lowy at stanlowy@outlook.com.

They meet most months of the year and maintain the trees, a mixture of young and mature … beeches.

Once inside, you come to a trail that runs off to the left.

It is a little muddy at this time of year, and last weekend the daffodils were not quite out, but the woods are still beautiful. The Friends are doing a good job, enhancing the conditions for optimum tree growth but at the same time maintaining a natural feel to the area.

After nearly 300 yards, the space to the right opens up into a sloping field which appears to be very popular with dog walkers.

The view from Mitchley Hill

To the left, between clumps of trees, the exit takes us back out on to Purly Oaks Road.

Turn right, continue for 220 yards, turn right onto Downsway, then left on to Briton Crescent after about 100 yards.

Follow this road up the hill and across Purley Downs Road, where Briton Crescent changes name and becomes North Down. This ends in a T-junction after about 600 yards. To the left you can see the sign indicating a footpath.

Continue along the footpath across Rectory Park and into Sanderstead Playing Fields. 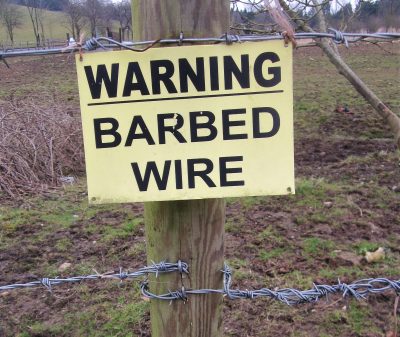 One of the hostile signs intended to deter people from using the public right of way. This one appears to be aimed at those unfamiliar with what barbed wire looks like

Follow the path that bends round to the right of the sports pitches. To the right you will see a footpath between the houses into Borrowdale Lane.

You emerge at the end of the lane and at the top of Mitchley Hill with a view across to the woods opposite. The hill is a great sloping meadow.

Head down, diagonally towards what appears to be an entirely pointless yellow gate that you can see down and to the right by the road.

Despite the unfriendly signs (“Private Land No Right of Way…” and “Protected by MJB Security Syystems”), the path over the road opposite the gate is very much a public right of way and open to the public.

It takes you up through the woods straight past Riddlesdown school on the left.

On the right, I passed a line of ramshackle old sheds and written on one of them was the legend “Any enquirys [sic] about horses tel 07979******”. That, I mused, is just the sort of vague marketing that doesn’t make you rich. Especially since half the potential customers had probably been put off by the “No right of way” sign. 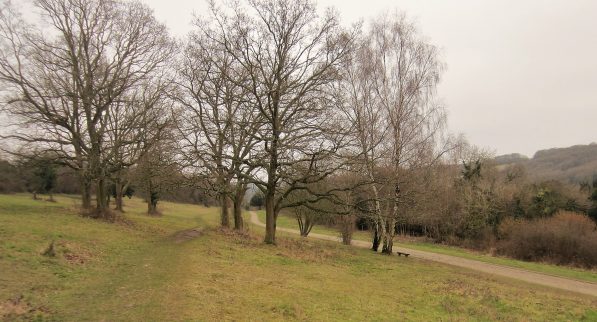 Riddlesdown Road is, in fact, a track, muddy at this time of year. But a road of some sort has existed on the downs here since Roman times

Just past the school, the track ends and three posts with yellow circles on them indicate a way on to Riddlesdown itself.

The large quantity of metal flasks discarded on the ground around the postsindicate that this is a favoured spot for nitrous oxide enthusiasts. Uppers on the downs, you might say. Not, fortunately, at 11 o’clock in the morning when I was there. At least, I didn’t hear anyone laughing.

Heading down diagonally to the left, you pass through a gate and Riddlesdown Road is before you. In reality, this “road” is no more than a track, albeit one originally built by the Romans, and it bisects this stretch of the downs. Follow it to the left and, after a couple of hundred yards, the London Outer Orbital Path – the London LOOP – joins you at a gate. 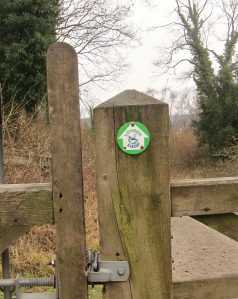 Our track takes us across the London LOOP, one of a number of long-distance pathways in the area

The LOOP, administered by Transport for London, is a 150-mile designated walk, though no one expects you to do it all in one go. It is divided 24 sections, and four of them are in our immediate vicinity: Section 4, from Croydon to West Wickham; Section 5, from Hamsey Green to Coulsdon South; Section 6, from Coulsdon South to Banstead Downs; and Section 7, from Banstead Downs to Ewell.

Those, though, are walks for another weekend. Here, we follow the track over a railway bridge and down on to Godstone Road.

Here, this walk is concluded. You have come about four miles.

Across the road is a 407 bus stop with a frequent service into the centre of Croydon and all it has to offer.

Alternatively, you could follow the LOOP across the road, along Old Barn Lane and up to Kenley Common, as previously described in Inside Croydon.

Indeed, you are very close to Whyteleafe so you could either jump on the bus or walk the half-mile down the road to the charming micropub that is the Radius Arms, also featured last year in Inside Croydon.

I will leave you there, at the bottom of the hill, spoilt for choice.

News, views and analysis about the people of Croydon, their lives and political times in the diverse and most-populated borough in London. Based in Croydon and edited by Steven Downes. To contact us, please email inside.croydon@btinternet.com
View all posts by insidecroydon →
This entry was posted in Croydon parks, Environment, Ken Towl, Kenley, Purley, Walks, Wandle Wanderer, Wildlife and tagged Ken Towl, Kenley, London LOOP, Purley Beeches, Purley Oaks. Bookmark the permalink.