LOOP takes the high ground to offer vistas across London

Some of the best views of the capital from the south of London can be found from the Croydon Millennary viewing point, towards the end of this section of the LOOP walk

WANDLE WANDERINGS: As he continues his ventures on the capital’s orbital walking route, KEN TOWL follows Saxon era church paths, side steps some rugby players, and arrives back in the borough of Croydon

Before London spread south into what are now the boroughs of Southwark, Lewisham, Bromley and Croydon, the Great North Wood stretched unimpinged from Deptford in the north via Norwood to Woodside in the south. Today we trace some of the vestiges of this woodland as we follow the London Outer Orbital Path from Hayes to Coombe Lane, a distance of a little more than five miles.

The LOOP is a circular route that takes the intrepid rambler all the way around the outside of Greater London. It runs about 140 miles from Erith near the Dartford crossings to Purfleet on the other side of the Thames. It is divided into 15 sections, each around 10 miles long. So far, we’ve walked Section 3, in two bite-sized chunks. On this walk, we’re heading for Croydon.

To get to the starting point of this part of the walk, you can take a 119 bus from central Croydon, or a 466, changing on to the 353 for the journey to the other side of West Wickham. Once at Hayes Station, the walk begins.

Looking back up the church path, to St John the Baptist Church

Follow the green LOOP signs up Station Hill to Hayes Common. Turn right along the road till it becomes a footpath through the trees and then a tarmac-covered path, Pole Cat Alley, between two gardens.

At the main road, cross over (taking care) and walk downhill to your right a few yards to Gates Green Road, with Wickham Common on your left. A little way down the road, follow the signs off to the right that take you straight to Church Drive and across the centre of a recreation ground. At the far side carry on – St, John the Baptist Church should be visible by now. Continue towards the church.

You are walking along the line of an ancient church path that once led to the church’s Saxon predecessor.

Turn right once in the churchyard and pass through the kissing gate and take another Saxon-age church path down to the roundabout on Addington Road. Look back at the church silhouetted against the sky, then look both ways on Addington Road – it’s busy. 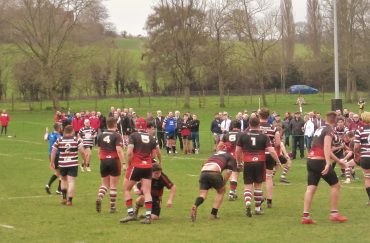 Across the road, enter Sparrow’s Den through the metal gate. Sparrow’s Den is home to the Beccehamian rugby club, as well as the Enchanted Village crazy golf course and a café serving drinks and snacks.

The route of the LOOP appears to cross the rugby pitches diagonally, but I didn’t take this option on the Saturday afternoon I passed through. The Beccehamian 1st and 2nd XVs were playing full-blooded matches and I didn’t think I would come off well in a collision with any of them. Not even the second team.

Our destination is Spring Wood, so called because springs appear there in the winter.

Navigate your way across or around the rugby pitches according to circumstances, to the woods on the other side of the park. LOOP signs direct you up into the woods and along a path higher up the hill that heads off to the left along the ridge which takes us, eventually, from the borough of Bromley and into Croydon. It past times, this would have been the county boundary, between Kent and Surrey.

At this time of year the woods are carpeted with wood anemones.

Spring Wood becomes Three Halfpenny Wood and after a while the path bears up to the right and you emerge, through a gap in the trees to your left, on to Shirley Heath.

The LOOP pathway leads us on to Shirley Heath, and Croydon

Follow the path along the left, through another gap in the trees to a second open space. Cross this and then follow the signs on to a wide track to the right then a narrow path left which takes you to Shirley Church Road.

Turn right and then, after half a mile or so, left into the pine woods which skirts Shirley High School. Follow the path round to Sandpits Road. This takes you to Upper Shirley Road, and a decent pub, The Sandrock, and a bus stop from which the 466 and the 130 will take you into central Croydon. Or you could continue for another mile… 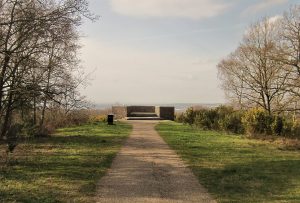 On a clear day, Croydon’s viewing point provides a vista across the whole of London

Cross the road, go down Oaks Road till a sign directs you into the wood and through a natural arch of ivy-covered trees. Climb, following the signs, through the attractive woods of the Addington Hills, and up the gravel steps through the bright yellow gorse to the “Croydon Millennary” viewing platform, which affords views, at least on a clear day, of landmarks such as the Millennium Dome, Canary Wharf and the top half of the Shard beyond the Norwood Ridge.

We follow the path behind the platform and turn right at the Royal Garden Chinese restaurant. Hey, this is Croydon. We do incongruity here.

Signs take you through an attractive patch of birch and conifers to emerge at Coombe Lane tram stop which sits right by the edge of the wood. From here trams take you to Croydon, until we set out for the next stage of the LOOP.

News, views and analysis about the people of Croydon, their lives and political times in the diverse and most-populated borough in London. Based in Croydon and edited by Steven Downes. To contact us, please email inside.croydon@btinternet.com
View all posts by insidecroydon →
This entry was posted in Bromley Council, Environment, Ken Towl, Walks, Wandle Wanderer, Wildlife and tagged Addington Hills, Ken Towl, London LOOP, Shirley. Bookmark the permalink.