Council to spend £50,000 on mural in council leader’s ward

Labour-run Croydon Council, struggling to make ends meet as the Tory Government continues to cut its annual grant, yesterday announced that it is to spend £50,000 to fund an art installation under a railway bridge in South Norwood. 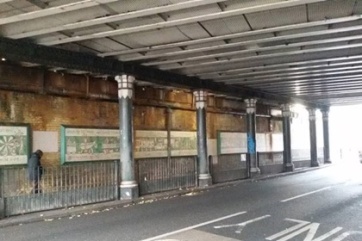 The railway bridge on Portland Road, about to get possibly one of the most over-priced makeovers yet seen in the artwashing of the borough

The scheme is to be backed by the self-proclaimed community group, People for Portland Road.

The announcement of this extravagant expenditure on artwashing was made two weeks to the day before the local elections on May 3.

Scott, an architect by profession, is also the founder and (only) chair of People for Portland Road.

The announcement of a competition to “win” the £50,000 task of adorning the walkway alongside Portland Road was made in the Architects’ Journal.

The report on the website of the must-read magazine of the architecture profession stated, “The team chosen for the commission will transform the ‘dark, damp and unwelcoming’ railway bridge underpass into a ‘much brighter and more inviting place’ by creating an artwork which incorporates an existing 1980s mural. 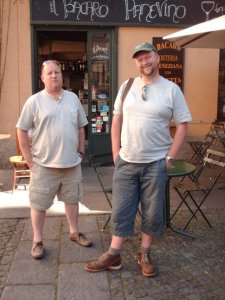 “The project, backed by local pressure group People for Portland Road, is part of wider plans to regenerate the historic suburb, which has suffered a prolonged period of economic decline. Proposals for the 26m-long underpass must improve the pedestrian experience while also allowing maintenance inspections of the bridge and being simple and affordable to run and maintain.

“In its brief, the council says it wants the commission ‘to transform the experience for pedestrians passing under the railway bridge. Currently the underside of the bridge is dark and unwelcoming and just a space to hurry through as quickly as possible.

“‘Through a combination of architectural lighting and other design elements, we are looking to create a space that feels welcoming, and safe and engaging to pass through – a physical and social “connector” rather than a barrier. We would welcome proposals that highlight the architecture and shapes of the underside of the bridge, and that reflect or acknowledge the rich heritage and local character of the area’.”

There is a suggestion that there may be a fair amount of “slack” in the budget for this project. Previous murals painted on underpasses in Croydon have cost less than £12,000.

Politics, eh? It’s all about choices.

The question here is: who made this one?

News, views and analysis about the people of Croydon, their lives and political times in the diverse and most-populated borough in London. Based in Croydon and edited by Steven Downes. To contact us, please email inside.croydon@btinternet.com
View all posts by insidecroydon →
This entry was posted in Paul Scott, People for Portland Road, Tony Newman, Woodside and tagged Croydon Council, Labour, Paul Scott, South Norwood, Tony Newman, Woodside. Bookmark the permalink.

13 Responses to Council to spend £50,000 on mural in council leader’s ward