Ever wanted taking a closer look at what cost Croydon residents at least £140million?

Or just fancied taking a ride in the lift used by actor Rob Brydon in the film Swimming With Men?

On the weekend of September 22-23, you can tick both of those goals off your bucket list, when Fisher’s Folly – sometimes known as Bernard Wetherill House, Croydon Council’s offices – is among 12 buildings in the borough participating in Open House London.

Open House London is a capital-wide annual event when the public get to saunter around and gawp at the inside of buildings which for the other 363 days of the year are strictly off-limits.

Even on Open House weekend, to get into some of the buildings, such as the Foreign Office or No10 Downing Street, booking is essential.

Among the highlights picked out by the organisers for 2018 is an early chance to view the new Aga Khan Centre in Camden; or if you prefer a building that’s 110 years old, there’s the Beaufoy-Diamond Way Buddhist Centre in Lambeth; the Foster and Partners-designed Bloomberg European Headquarters in The City throws its glass doors open; or for another, altogether different aspect of industry, there’s the Southwark Integrated Waste Management Facility off the Old Kent Road. Councillor Stuart Collins will be beside himself at such a prospect. 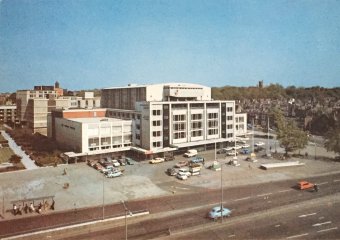 The Open House London organisers have also helpfully collated a listing of 77 guided walks being staged around the capital over the course of the weekend (details available here).

To be honest, the dozen venues around Croydon contain few surprises, or buildings which have not offered access at other times during the year, none of which makes them any less worth a visit.

There’s the Shirley Windmill, there’s Old Palace (which, dating from 960, makes it among the oldest buildings explorable over Open House weekend), the Whitgift Almshouses, and there’s even the Fairfield Halls, in mid-refit, to give you a chance to assess whether it really will be ready for its handover from the builders in November…

Sadly, the Croydon list offers no chances to visit any of the “award-winning” (© Alison Butler, Paul Scott and The Campaign Company) architecture from any of the Brick by Brick developments. That’ll be because, so far, the council’s own house-building company has so far managed to build zero homes…

Oh, and if you didn’t know about the Fisher’s Folly location shoot for Swimming With Men (Brydon and a gaggle of other comedians in a Fully Monty-esque, mid-life crisis movie, this time set around synchronised swimming), then take a look at the trailer here. The movie’s use of Croydon Council offices could amount to the single greatest achievement of Jo “We’re Not Stupid” Negrini’s time as borough clerk.

News, views and analysis about the people of Croydon, their lives and political times in the diverse and most-populated borough in London. Based in Croydon and edited by Steven Downes. To contact us, please email inside.croydon@btinternet.com
View all posts by insidecroydon →
This entry was posted in Bernard Weatherill House, Brick by Brick, Croydon Council, Fairfield Halls, History, Jo Negrini, Old Palace and tagged Bernard Wetherill House, Brick by Brick, Croydon Council, Fisher's Folly, Jo Negrini, London Borough of Croydon, Open House London. Bookmark the permalink.