Very cross: Holmes, Watson and van Helsing confront the Count. Who will win the day? Or the night?

The game’s afoot in the latest Theatre Workshop Coulsdon production, as seen by our veteran theatre critic, BELLA BARTOCK

I had never before seen it written down. But when my frequent companion, Claudia De Boozy, replied to my text inviting her to the opening night of Richard Lloyd’s new play, Sherlock Holmes And The Vampyres of London, she sent a monosyllabic response: “Meh!”

Pressed on the matter, Claudia said she had little interest in Holmes (“It’s all been done, dahling”), and less in a Bram Stoker re-tread. But when I mentioned that there would also be an opportunity for dinner at Coulsdon’s finest restaurant (as it was a vampire-themed piece, I suggested we go for a steak), thankfully she had a change of mind.

There was a sense of tension, though, when she arrived at my home in her new car, driven by a young man whom she referred to only as “Me boy”. Claudia seemed much put out when her driver was despatched into the Coulsdon Community Centre to get the pre-show drinks in, and he came back with a bottle of Chardonnay. “I can’t imagine what you were thinking,” she chided him. 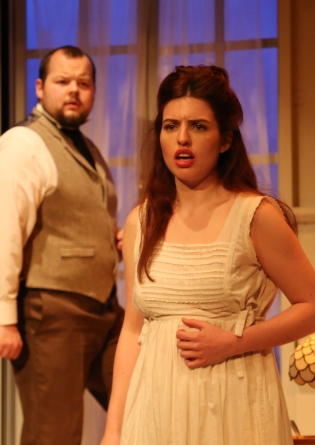 Indianna Scorziello, as swooning Persephone, and Connor Nestor as her beau, the roguish Rupert. Can they thwart the vampire threat?

“I drink my wine by the glass, not the bottle…”. Claudia then stormed off to her seat, tripping ever so slightly in her kitten heels as she went.

So the atmosphere in our little party among the Coulsdon audience was decidedly frosty at curtain up.

Which fitted perfectly to the mood of the opening scene, set in a crypt at the Brompton Necropolis, the fog pouring in over the stage as grave robbers arrived to do their worst …

At which point, I feel compelled to restrain myself from any further description of the plot. Reviewing this new play is somewhat awkward, since so much of what I’d like to say about it might be regarded as what I believe is referred to these days as a “plot spoiler”.

Lloyd, one of the Theatre Workshop’s regulars on stage, has turned playwright and director to concoct something drawing heavily on the works of Sir Arthur Conan Doyle and for good measure mixed in a bit of Dracula, another popular work of fiction from the latter years of the 19th Century.

Lloyd himself admits that a fusion of the detective serial and horror novel was not an original idea. “Bringing together the two pre-eminent creations of late Victorian fiction was a bit of a no-brainer,” he told me before the show.

In fact, he has done more than that. There’s a touch of Robert Louis Stevenson, and a hefty dollop of George Bernard Shaw, too. It is even suggested that one of the characters included in Lloyd’s work is based on a prime suspect behind the all-very-real Jack The Ripper murders.

“If it were ‘popular’ music,” Claudia whispered into my ear, “then they’d call it a mash-up.” 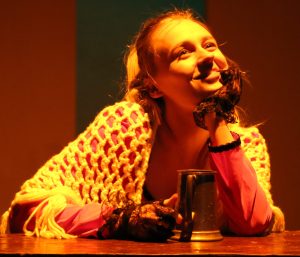 Hannah Montgomery as Eliza Doolittle is an unexpected scene-stealer

In a mystery thriller such as this, where a fast pace is demanded to keep the tension high and audience on  the edge of their seats, the set design is all important.

The crew and designers have surpassed themselves here, coming up with something ingenious which, in a cramped stage space, manages to provide clearly different settings which include the cemetery, Holmes’ Baker Street apartment, a gentlemen’s club, street scenes, and the bedroom of a fashionable London house, where eerily the wind whips through on cue when the vampires arrive.

On the whole, the performances are convincing and well-acted, if perhaps with a tendency from one or two to go all EastEnders “cocker-nee”, which suggests that they have spent too much time at the Dick Van Dyke school of old Lahndan town. And make no mistake.

It is said that as you get older, policemen seem to get ever younger; so Joe Wilson is a surprising youthful, but no less perceptive, Holmes. John East appears as a perfect foil as his long-suffering sidekick Dr Watson (might there be one too many “Elementary, my dear Watsons” in the script?).

Nice of you to drop in: who can rescue van Helsing, Anya Destiney, left, and John East’s Dr Watson?

But what is noteworthy, given the male-dominated society of Victorian England, is how many fine parts, and performances, come from women: from Lisa Lloyd’s menacing, snake-like appearance in the very first scene, to Indianna Scorziello’s swooningly frail young socialite Persephone Throgmorton, through to Anya Destiney as Dr Van Helsing.

Here, Richard Lloyd has gone off piste by casting the vampire-hunter as a woman. Destiney delivers, together with Connor Nestor (playing the roguish Rupert Knightley), a spectacular sword-fight the kind of which Errol Flynn would be proud.

East End flower girl Doolittle (“I’m a good girl, I am,” is delivered as if by Audrey Hepburn) is played by Hannah Montgomery, who has a surprisingly important role, including one of the best lines of the night, beautifully delivered.

Rory Curnock Cook provides menace from a great height as Count Dracula. Though if anything, the greatest embodiment of evil on stage is another character entirely.

And to identify them would, I fear, be giving away the plot. Suffice to say, towards the end, Dracula does get very cross. Holmes traditionalists, however, may view this only as a three-pipe mystery.

Afterwards, over our post-theatre supper, I asked Claudia whether she had been won over, which she said she had, though she expressed disappointment at not seeing Peter Mandelson.

“I read somewhere that the Prince of Darkness was in it,” she said.

But I believe she was genuinely shaken by some of the creeping horror of the play: she ordered extra garlic sauce with her steak.

News, views and analysis about the people of Croydon, their lives and political times in the diverse and most-populated borough in London. Based in Croydon and edited by Steven Downes. To contact us, please email inside.croydon@btinternet.com
View all posts by insidecroydon →
This entry was posted in Art, Coulsdon, Theatre, Theatre Workshop Coulsdon and tagged Coulsdon, Coulsdon Community Centre, Sherlock Holmes, Sir Arthur Conan Doyle, Theatre Workshop Coulsdon. Bookmark the permalink.