Mayor Khan facing ‘the most fragmented Assembly ever’

Like last month’s European elections, the London Mayor and Assembly votes in May 2020 will be conducted using a form of proportional representation. As WALTER CRONXITE reports, based on the Euro poll, that could cause even further discomfort for Croydion’s old political duopoly 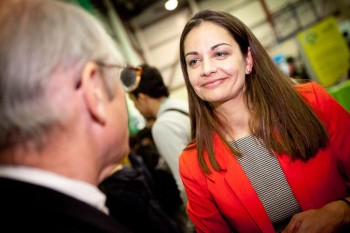 Siobhan Benita: might the LibDem Mayoral candidate get close to unseating Sadiq Khan?

Even one of the capital’s most expected political analysts, Professor Tony Travers, has been prompted by the seismic political shifts of last month’s European Parliament votes to consider a previously seemingly impossible outcome in the May 2020 London Mayor elections: “Could Sadiq Khan actually lose?”

The LSE’s London politics guru was writing yesterday for the very well-resourced On London website of the former Guardianista Dave Hill, in a co-bylined piece with Robert Gordon Clark, the chairman of London Communications Agency, a Holborn-based PR agency which includes among its clients several multi-billion-pound development big-hitters, such as Barratt, British Land, Hyde and Berkeley.

In fairness, Travers does presage his question about Khan not winning a seemingly certain second term at City Hall by describing it as a “counterfactual” proposition. But as the significance of the Euro poll results sink in, and with the next city-wide vote scheduled to to be played out in London next May in another form of proportional representation, there’s plenty of opportunities for the electorate to try to mix things up a little from the usual Red-Blue duopoly.

Here in Croydon, amid the wreckage of the Tories’ pathetic fifth-placed showing in London in the Euro elections, Alasdair Stewart, until recently the chair of the local Conservative Federation, at the weekend posed the same questions, just framed slightly differently: “Will London elect its first Liberal Democrat Mayor?” 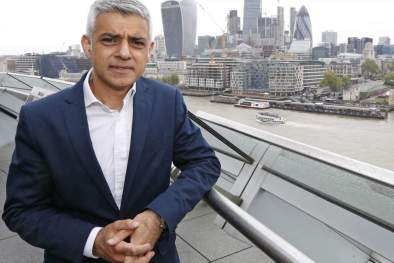 Sadiq Khan: is there really a possibility that the Mayoral election next year will be a close one?

For any of this psephologists’ fantasy politics to play out, much depends on the voting system used for the London elections.

Next May, we will again get to cast up to four votes in the Greater London Assembly elections: first and second preferences for Mayor; a first-past-the-post vote in Sutton and Croydon, one of the 14 Assembly constituencies; and a PR-style vote for 11 London-wide seats.

As Travers notes: “This range of options does, of course, encourage multiple voting across political parties, a factor we have seen in the previous five sets of GLA votes, which complicates matters further (and could get Alastair Campbell into even more trouble).”

And, let’s be fair, Mayor Khan’s first term has hardly been a unalloyed success, with Crossrail delays (albeit inherited from the previous administration) hamstringing his transport budget, and his having to shoulder much public criticism for knife crime tragedies, despite his having to manage after nearly a decade of police cuts from Tory-led governments.

In Khan’s favour is his determinedly clear Remain position, as we seem doomed to go into 2020 still grappling with Brexit, and the global sympathy vote he has attracted for being abused by the racist idiot who inhabits the White House.

But Travers is suggesting that Khan, and the Labour Party in London, really ought not take matters for granted next May. “The fragmented nature of the European election result in London does raise at least the possibility of the first preference margin being close,” Travers writes, “in which case the second preferences of voters whose first choice didn’t make the run-off could prove decisive.”

London Labour’s attitude to the Assembly elections has been somewhat unusual. In 2016, at the last Assembly elections, the campaign in Sutton and Croydon was conducted almost with the handbrake on, as officials who had been handed party jobs in the Blairite era feared the possibilty of actually winning the constituency and by doing so jeopardising the prospects of their centrist candidates who were anticipating a cosy four years at City Hall on £50,000 pa thanks to the quirks of the Assembly’s list system.

With Croydon now firmly established as a Labour-voting borough, and with Tory AM “Silent” Steve O’Connell stepping down from the sinecure at the end of his term, 2020 might have presented a real opportunity to win the Sutton and Croydon seat for the first time since the London Assembly was formed 20 years ago. 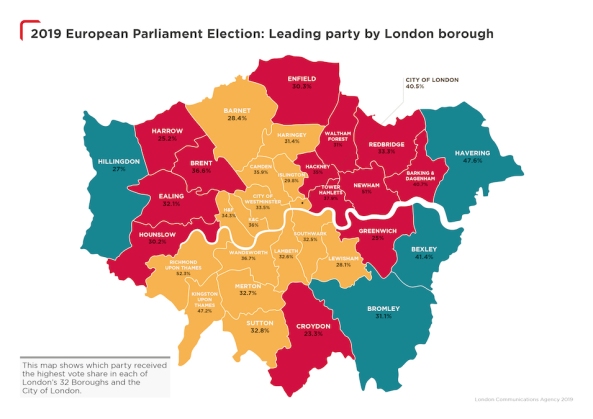 The London vote shares, by borough, in the 2019 Euro Elections, with a swathe of orange through the centre of the capital, including Labour strongholds such as Lambeth, Southwark and Islington, and previously Tory-voting Wandsworth and Westminster. From the London Communications Agency

Yet London Labour seems intent, yet again, on doing its utmost to not win the seat.

Although a couple of wannabe candidates, Croydon councillors Jamie Audsley and Patsy Cummings, have been staging their own campaigns for months, they – and any others – won’t now face any party selection process until November, giving whoever is eventually picked barely six months to try to make an impact on an electorate of more than 150,000 spread out from Worcester Park to Crystal Palace and Farthing Downs.

Labour’s late-starting candidate will be formally joining the Assembly election race nearly 12 months behind Neil “Father Jack” Garratt, the Sutton councillor who was the surprising choice of candidate by the Conservatives, and who has been busy ever since establishing some kind of recognition factor with electors on both sides of the borough boundary.

After the fiasco of the Conservative performance in the European elections, Garratt knows he has much work to do if he is to get the Tories out of the hole of their collapsing 9.8 per cent vote share in Croydon. 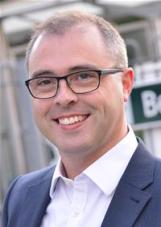 Neil Garratt: at least the Tories have managed to choose their candidate

In Sutton, it was even worse for Garratt and the Tories, as their vote share in that borough evaporated to just 8.5 per cent, slipping behind Labour.

Sutton Labour stalwart and renowned psephologist Charlie Mansell boasted on social media, “Was this one of the lowest Labour vote share drops in the country (South Somerset was a 3.4% drop but on a smaller vote share).

“Also was there any other seat where Labour moved up the vote order as it did from 4th to 3rd here?”

Sadly for the ever-so-hopeful Mansell, the truth is that his party’s vote share was already so low in Sutton’s Labour councillor-free zone that there was probably no lower that it could fall. The promotion to third place was solely the result of Tory Brexit misfortunes, not any particular Labour merit.

Indeed the two main national political parties in Sutton garnered only 18.3 per cent together – is that a record south of the Scottish border?

Garratt’s plight will not be much helped by Shaun Bailey, the Conservatives’ Mayoral candidate, who with each passing week is showing himself to be an electoral liability.

Siobhan Benita, the New Malden resident who stood as an independent candidate in the 2012 Mayorals, is meanwhile being seen as a good choice by the LibDems, though the Greens’ Sian Berry, already an Assembly Member, is probably already better established with Londoners.

And this is where things start to get really interesting, if you want to suppose that disgruntlement with the political duopoly continues into 2020. The LibDems (32.8 per cent) just beat the Brexit Party (30.4 per cent) in Sutton.

The result across Croydon and Sutton in 2019 Euro elections:

The powerful showing by the Liberal Democrats likely means that they will be one of two challengers for the Assembly seat next May. Now it’s a contest between Labour and the Tories as to who will be the other contender in this first past the post seat.

Of course, much has to happen between now and May 2020:

The London elections remain an exercise in devolution which – unlike voting for the Scottish Parliament – has never truly captured the attention of the public of the capital, not least because City Hall has considerably fewer powers than Holyrood.

And as Travers points out in his article, the Assembly Members have really only ever operated as a rather grand scrutiny committee for the Mayor, rather than as a legislative body themselves. Since 2000 – if you accept that Ken Livingstone, in his first term, was a de facto Labour Mayor, just not a New Labour one – the Mayor has always enjoyed enough party support at City Hall, meaning that there has been no chance of the annual budget not being passed.

Yet if last month’s voting patterns in London are repeated in May 2020, according to Travers’ calculations, that could change, and create an altogether different inter-party dynamic at City Hall.

“Hidden away in the GLA 1999 Act,” he writes, “is the power the Assembly has to vote down the Mayor’s annual budget.

“This can only be exercised if a minimum two-thirds majority of the 25 members – that is effectively 17 AMs – opposes it…”. They also need to manage to do so twice. 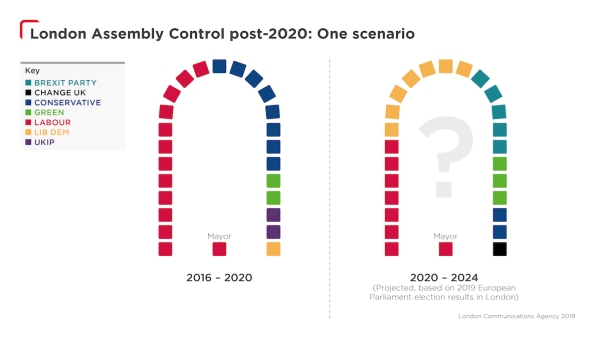 Labour would lose its majority at City Hall if last month’s voting is repeated in May 2020. From London Communications Agency

“The loss of four Assembly seats would reduce Labour’s total to eight and lift the combined total of all the other parties to the 17 they would need to stop the Mayor getting his budget through. So if Sadiq Khan were re-elected – which still appears likely – he could nonetheless find himself in the unenviable position of seeing his budget overturned by an alliance of AMs from parties other than Labour.”

Travers outlines a scenario where “it is perfectly possible to imagine a London Assembly made up of seven Lib Dem and seven Labour AMs, five from the Brexit Party, three Greens, just two Tories and perhaps one from Change UK.”

And Travers adds: “It would be the most fragmented London Assembly we have yet seen.”

As has been said before, we live in interesting times.

9 Responses to Mayor Khan facing ‘the most fragmented Assembly ever’