How Lime puts the squeeze on bike riders, at 15p per minute 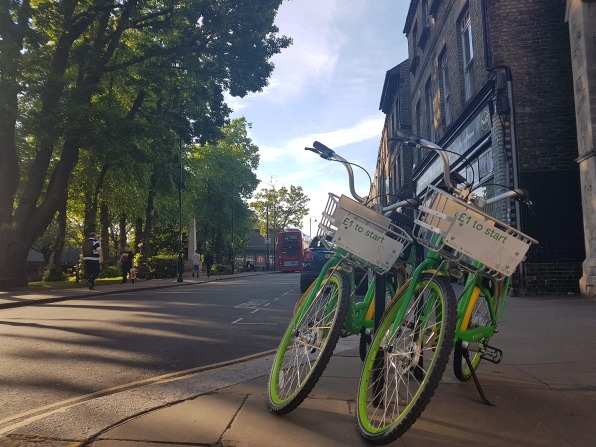 The future of transport in Croydon, at 15p per minute or part thereof

KEN TOWL took a ride on one of the new dockless e-bikes that can be found in the borough, so that you don’t have to…

The future has arrived in Croydon, and the future is green. Lime green.

The future is one in which, according to Jaanaki Momaya, the general manager for Lime UK, the company behind the dockless e-bike hire brand, “we want to help Londoners tackle the dangerous levels of air pollution in the capital and empower residents to reduce the environmental impact of their journeys”.

This jargon is characteristic of the way a commercial entity like Lime sweetens its profit-motivated pill and allows the local council a little leeway to pretend to be working hand-in-hand with Lime as part of its own green policies.

Indeed the council’s website quotes Stuart King, the cabinet member for environment and transport, as saying, “We want Croydon to become one of the greenest boroughs in London and bringing a scheme like this into the borough is one of the ways we are trying to achieve this.” 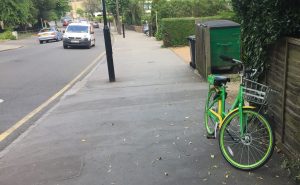 Abandoned, or just resting? This Lime bike was poised in the same place for almost a week

At a recent meeting of the Croydon Cycle Forum, a better insight into the realities was offered when one councillor, Muhammad Ali, said that the council couldn’t actually stop Lime from coming into the borough. So it looks like the bikes will be lying around the streets of Croydon for the rest of the year-long trial, at least.

At that same Town Hall meeting, another councillor, Simon Brew, enquired about the possibility of negotiating a discount on the bikes’ hire charges for pensioners. This, though, may be a conundrum that, like the Irish backstop, can only be resolved by technology that is yet to be invented.

So, only some of the future has arrived in Croydon.

Can’t find a Lime bike? You can ring its bell

Of course, the concern about pensioners arises from the cost of hiring the bikes.

While on one hand, Lime bikes are eminently pensioner-friendly, in that their electric motors provide a welcome boost of energy to start you off and also take the edge off uphill climbs, Limes are not cheap.

At £1 to unlock and 15p per minute (“or part thereof”, as they are contractually obliged to stipulate), the hire cost soon mounts up. Hire a bike for three minutes and a part thereof, and you have already passed the £1.50 cost of a bus ride (or, thanks to Sadiq’s hopper fares since 2016, two or more bus rides within an hour).

I decided to test out Lime bikes so that you don’t have to and – spoiler alert! – you will thank me for it.

I downloaded the Lime app to my smartphone and opened it to discover where my nearest Lime bike was located. For this trial, I adopted the role of either a commuter trying to get to a station to continue my journey to work, or a cycling senior going off up the hill to Coombe Lodge to celebrate my 80th birthday.

Though in the last couple of weeks I had seen one of the bright green bikes leaning temptingly against a wall near Addiscombe tram stop, the app showed me that the nearest parked bike was just inside Ashburton Park. Close to the Tenterden Road entrance.

Had someone decided that getting the bus was cheaper than a Lime bike?

I set out at a little after 11am and, 10 minutes later, arrived at the spot. There was no bike.

I walked around the new cafeteria and the bowling green like one of those idiots who used to search for virtual Tamagotchi characters. I was a little blue dot on a map, circling a slice of lime without ever quite reaching it.

After 20 minutes or so, in which I tried playing with the scale of the map better to locate my quarry, I decided that the bike’s GPS must have been removed and chucked in a bin. I opted to move on to the next nearest bike which, according to the map, was on Woodside Green.

A short walk and there it was, just by the bus stop.

Anticipation swelled in my innocent breast. I scanned the barcode on the back of the bike and I was asked for payment details. I typed in my card details and scanned again.

There was a faint click from somewhere in the bike’s mechanism but the message on my phone was “Failed. Try again”.

If this was the future, I could feel it slipping from my hands.

I noticed a bell symbol on the app. You could ring the bell. I tried this. It worked.

The bike made an unpleasant and quite distinct electronic sound. I realised, rather slowly I confess, that this was to help locate the bike. Inspired, I returned to Ashburton Park, put my virtual self, the blue dot, right in the middle of the virtual bike, the slice of lime, and rang the virtual bell.

At last – a Lime bike that was ready to be used, although illegally parked

Nothing but the clack-clack of the nearby boules match (oh yes, we have boules now in Ashburton Park).

I was wasting my time.

I went for a coffee in Better Coffee Corner and ordered a flat white. At £2.50, it was the equivalent of a 10-minute Lime ride. I reached into my pocket for a tenner to pay.

“Card only,” said the barista, nodding, as he did so, to the sign that said “Card Payment Only” by the till.

“The future has arrived in Ashburton Park”, I said.

I was not going to be defeated. I looked at my phone. There was another bike about half a mile away in Stretton Road, off Morland Road, so I went there.

I scanned the code and this time the bike clicked and whirred and made a welcoming electronic sound and my phone said “Welcome!” and I got on the bike and it moved.

And it really moved. The first push on the pedal is amplified by the motor and really gets you going. I had to manoeuvre very quickly to avoid hitting the car in front of me.

You soon get used to it, though and, quite frankly, the electronic boost is only really perceptible at very low speeds. 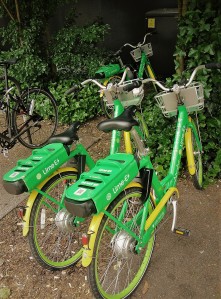 Dingwall Road has a decent supply of Limes, which could be handy for those leaving East Croydon Station

For those who are interested, it feels like a quite clunky, heavy ride, reminiscent of Boris Bikes. But then I suppose multiple-use bikes need to be robust. Boris Bikes cost £2 for 30 minutes. Half an hour on a Lime bike would cost £5.50, or as Boris himself might put it, in the type of language befitting our next Prime Minister, like spaffing your pension up the wall.

I took the bike around the park and down to Lower Addiscombe Road where, after waiting for a 15p-minute for the lights to change, I parked and locked it.

I had been on the bike for 10 minutes and 26 seconds so I was charged £2.65 (£1 to unlock, 15p per minute and 15p for a part thereof). It was a little after half past 12. If I was heading for work and relying on a Lime to get me even part of the way there, I would have been late. If I had been the octogenarian birthday boy, I would probably have missed the cake.

According to Lime I had travelled 2.3km – less than two miles – and used up 27 calories. Yes, 27 calories on the bike. But I’d used somewhat more trying to find one that (a) worked and (b) actually existed.

The future is green, but so is the tram, and the tram can take me from Beckenham to Wimbledon for £1.50.

Forget Lime bikes, unless you want to get squeezed.

News, views and analysis about the people of Croydon, their lives and political times in the diverse and most-populated borough in London. Based in Croydon and edited by Steven Downes. To contact us, please email inside.croydon@btinternet.com
View all posts by insidecroydon →
This entry was posted in Commuting, Cycling, Ken Towl, Lime bicycles, Transport and tagged Ken Towl, Lime e-bikes, Muhammad Ali, STUART KING. Bookmark the permalink.

4 Responses to How Lime puts the squeeze on bike riders, at 15p per minute