Posted on November 5, 2019 by insidecroydon 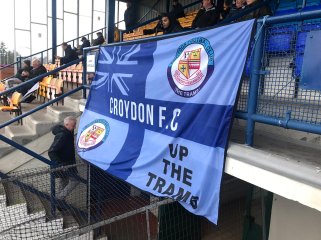 They must have considered installing revolving doors at the dressing room entrance at Croydon Arena by the end of last month, as while two players left Croydon FC during October, manager Liam Giles was signing up three new faces for his squad.

There’s no transfer window in the South East Counties Football League, down in tiers 9 and 10 of the English football pyramid. No transfer fees, either, usually, and certainly no agents. So any transfer “wheeling and dealing” often comes down to the clubs’ coaching staff’s personal contacts and relationships with players.

The departure of attacking midfielder Charlie Gee, who signed to play for Reigate-based South Park, two leagues higher in the Isthmian League South, is undoubtedly a loss for Croydon. Gee had scored seven goals in the first two months of the season for Croydon.

Richard Pingling, a regular in Giles’s Trams teams in the early weeks of the season, has also left the club.

There has been a sense of Croydon’s squad being at full stretch, with Giles including himself in the matchday squad on a couple of occasions, even coming off the bench to register a couple of assists in the 4-4 draw with Greenways, and having to pick himself recently because one of his players was a late withdrawal before the game due to illness.

So signing up Martin Smith, Ed Scurfield and Zach Powell should help improve Giles’s options as Croydon maintain their promotion push, to return to the SECFL Premier Division at the first attempt.

The headline signing is Smith, 28, regarded as a prolific striker who scored 46 goals in the 2016-2017 season for Banstead Athletic in their promotion-winning campaign from the Combined Counties League Division One.

During that season, the centre forward was a team-mate of Giles. “He adds genuine quality to our side and I am excited to have him on board,” Giles told Inside Croydon.

Smith, whose former sides also include Redhill and Horsham YMCA, hit the ground running for the Trams. He won the club’s Man of the Match award for the Molesey game after getting a goal and an assist on debut, and he then rifled home a penalty in the game with Elmstead. 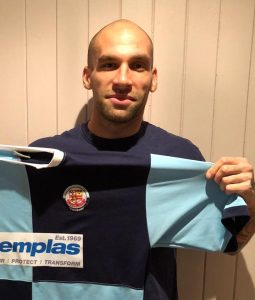 Giles will surely be hoping that Smith can dovetail effectively with top scorer Andy Somo in the coming months.

Croydon’s other signings are more defensively oriented, as Giles looks to get more steel for his backline.

Energetic former Farnham Town midfielder Scurfield, who made a few appearances for Croydon last season, has made two substitute appearances since re-signing. It was Scurfield who got the 90th-minute winning goal in the club’s Hospitals Cup tie last week.

Meanwhile Powell, who Giles describes as a “versatile, defensive-minded player who can play anywhere across the backline”, has previously played for Horley Town, Haywards Heath Town, Hanworth Villa and Sutton Common Rovers.

News, views and analysis about the people of Croydon, their lives and political times in the diverse and most-populated borough in London. Based in Croydon and edited by Steven Downes. To contact us, please email inside.croydon@btinternet.com
View all posts by insidecroydon →
This entry was posted in Croydon FC, Football, Sport and tagged Andrew Sinclair, Croydon Arena, Croydon FC, Liam Giles. Bookmark the permalink.