Posted on February 14, 2020 by insidecroydon 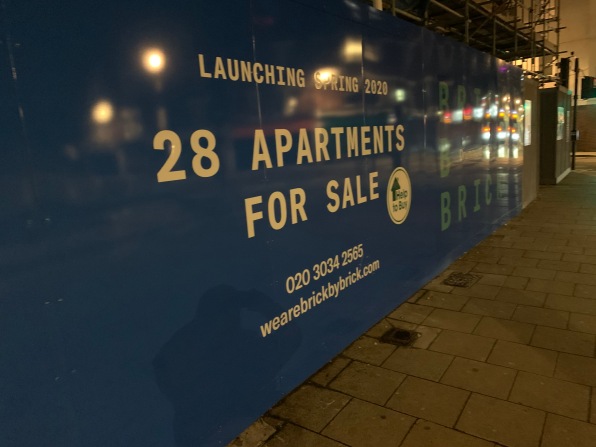 Brick by Brick is not meeting its target for providing affordable homes, while many of its new builds are going for private sale at high prices

The spin is in. Our housing correspondent, BARRATT HOLMES, on how the council is responding to gathering disquiet by spending thousands on a London PR firm

They were there again yesterday, despite the stormy February weather.

They’ve been turning up once a week for the past month to picket Brick by Brick’s £1million showroom on George Street.

Politely, Croydon residents are getting just a little bit more militant. After five years of the council-owned, loss-making Brick by Brick, the people of Croydon are getting more vocal about poorly designed blocks being built adjacent to their homes, on green spaces and children’s playgrounds.

“We acknowledge the need for housing but are concerned by what is being destroyed to achieve it,” according to Roxanna Kishore-Bigord, one of the organisers of the weekly protests.

It’s not as if Kishore-Bigord and her fellow protestors are driving away crowds of potential buyers for the homes for private sale that Brick by Brick is trying to sell. There was barely a visitor in more than an hour yesterday morning.

The Brick by Brick staff inside do their best to avoid eye contact, or any contact, with the protestors outside.

Kishore-Bigord has been turning up for half an hour each week, and she says she intends to do so for as long as needed. A proposal, part of the latest BxB “pipeline”, to concrete over green space between Roffey Close and Wontford Road in Purley was what persuaded one of yesterday’s protestors to turn out.

But it is just one of the neighbourhoods being targeted by Brick by Brick. Although numbers were few, the protesters came from all parts of Croydon and included a variety of people, from historians to carers to those from the legal profession.

And while there were just a handful of people there, it amounted to more than the number of purpose-built council homes Brick by Brick has managed to build since the company was formed in 2015.

One person did slip through the cordon, and into the BxB showroom. They didn’t stay long. It turned out that they were not a prospective buyer for one of the house-builder’s £600,000 “executive homes” in Upper Norwood, but in fact someone curious for more information about where Brick by Brick will be imposing one of their next schemes.

The feeling of anxiety and angst about Brick by Brick is spreading.

Earlier this week, more than 100 people turned out in New Addington for a meeting to form a residents’ association with the specific aim of opposing the extensive building programme the council wants to impose there. The mood was sometimes angry, and Simon Hall, the ward councillor and council cabinet member, was wheeled out to speak up on behalf of Brick by Brick.

The mishandling of the council’s home-building programme – slow delivery of new properties, hundreds of millions of pounds borrowed for what is a speculative scheme, planning permissions being granted with scant regard for existing residents, failure to conduct proper consultations as required by law… there is a litany of other complaints – has seen Croydon Council and Brick by Brick resort to hiring an expensive West End public relations firm – ING Media. Which means more public money squandered.

ING Media work closely with the organisers of the British gathering of MIPIM, so they are definitively an organisation on the side of the property tycoons and speculators.

“We partner with visionary leaders, brands, organisations and cities from all over the world to define their place in the built environment.” The italics are their choice. “Our extensive client experience means we are the only agency that has a connecting force within the worlds of property, architecture, design, regeneration and culture. Together with our client partners, we engage in an international conversation to create better places, transform businesses and drive meaningful change. ” 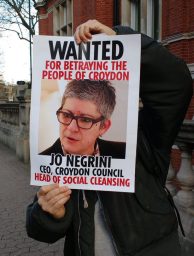 The council CEO has been the subject of previous protests

Their client list is full of the multi-national developers and architects firms of which council CEO Jo Negrini is so fond of dealing with.

But what business does any local authority, let alone one that is constantly complaining about how they are strapped for cash, have in using public money to hire a firm like ING?

Certainly, it is not anything which Labour council leader Tony Newman or the “We’re Not Stupid” Negrini have bothered discussing openly with the people who pay their generous allowances and salary.

ING’s arrival on the Croydon scene coincided with a lengthy social media posting on behalf of Brick by Brick which dismisses the complaints against the company as “fake news” (how very Trumpian), and which included a series of basic factual errors and outright lies about how the company is run.

The fundamental fact is that someone at Croydon Town Hall has made a decision to spend potentially tens of thousands of pounds of public money on a PR campaign that goes against the interests of the very people the council is supposed to serve.

No one at ING was prepared to answer simple questions about their work for Croydon Council, or Brick by Brick. Or how much they are being paid. But people’s lives, and their homes, are not something that can simply be smoothed away with a bit of expensive public relations spin.

As one of those at the BxB protest yesterday said, “It is surely time that Newman and Co start considering how Brick by Brick may affect where people put their cross on the ballot paper at the next local elections.”

News, views and analysis about the people of Croydon, their lives and political times in the diverse and most-populated borough in London. Based in Croydon and edited by Steven Downes. To contact us, please email inside.croydon@btinternet.com
View all posts by insidecroydon →
This entry was posted in Brick by Brick, Community associations, Croydon Council, Jo Negrini, Paul Scott, Tony Newman and tagged Brick by Brick, BxB, Croydon, Croydon Council, Jo Negrini, Labour, London Borough of Croydon, Paul Scott, Tony Newman. Bookmark the permalink.