For the second time in less than two months, the police had to be called to a disturbance at a meeting involving Jeet Bains, the Conservative councillor for Coulsdon West.

On Friday evening, Bains was attending the Croydon gurdwara, on St James’s Road, for a general meeting as the chairman of the temple’s governing body, when complaints about who was – and who was not – being allowed to attend the event saw tensions raised and angry exchanges between members.

Bains, accompanied by a small group of what one witness called “heavies”, and other officers from the management committee attempted to exclude a group of up to 40 people who had arrived keen to find out more about the handling hundreds of thousands of pounds of the temple’s charity funds, to question the conduct of Bains and his fellow officers following accusations of racist abuse.

Although the gurdwara has charitable status, Bains and the other officers had failed to hold any annual meetings – at which financial accounts are submitted for scrutiny and approval, as required under charities laws – for more than five years.

Threats and insults were exchanged outside the temple before the meeting, causing “quite a commotion”, according to one eye-witness. Police cars with their lights flashing and sirens sounding arrived at the scene to calm matters. The meeting went ahead, with Bains chairing it, but needing eight police officers to attend to ensure order.

Friday’s meeting had been expected to be controversial. 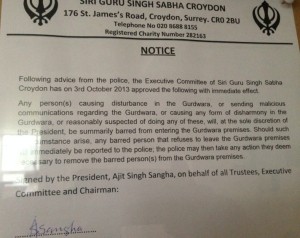 Warning sign: the notice posted ahead of Friday’s meeting, signed in the name of Jeet Bains (chairman) and others

The gurdwara, while run by Croydon’s sikh community, has always had a policy of welcoming all faiths. However, before a prayer meeting on August 31, the police were called when there were angry exchanges witnessed between Bains and a local woman, Sabrina Naz. According to several witnesses, Naz was abused by Bains over her religion.

Later, according to one witness, “My parents, uncle and aunts and I witnessed Bains coming into the hall with his gang of heavies and pointing out which ones he wanted dealt with.  They were then led outside.

“He returned inside and said that we were ‘all finished’ and that was the end.  He told us that he thought we were ‘shitting ourselves’ as the police were on their way.”

Bains refutes that he made any racial remark and dismisses the incident as being caused by “troublemakers”. In the past, according to other members of the gurdwara, Bains has boasted that he has “contacts” in the police. One of Bains’ fellow councillors for Coulsdon West is David Osland, the former senior Met officer who was one those in charge of the failed and flawed investigation into the murder of Stephen Lawrence.

After speaking to some of those involved in the incident at the gurdwara on August 31, Croydon police took no further action.

In Friday’s meeting, Naz took the floor and confronted Bains about the incident in August. Naz called for Bains to apologise to her in front of the meeting. Bains refused to do so, again denying that he had made any remark. When she was asked to attend a private meeting, she said, “He said it to me in a public place – he can apologise to me in public.

“You are not fit to be a councillor,” Naz said to Bains’ discomfort.

Another item on the agenda was a proposal for the sikh centre to buy a three-bedroomed house on Tavistock Road. Trustees told the meeting that the property, priced at £475,000, was a good investment, though they were unable to explain how the house would be paid for since the accounts showed only £200,000 as assets.

When this was questioned and the trustees were asked to explain why “Sold” signs were already outside the property, even though no formal approval by the members of the gurdwara had been sought, let along obtained, the trustee making the presentation walked off the stage. The meeting chairman, Bains, announced that they would go ahead with the property purchase.

Guneet Singh, a lawyer and member of the gurdwara who was present at the incident in August and on Friday night, says that those unhappy at the management of the centre by Bains and his committee are now considering what action to take next, including a complaint to the Charities Commission.

News, views and analysis about the people of Croydon, their lives and political times in the diverse and most-populated borough in London. Based in Croydon and edited by Steven Downes. To contact us, please email inside.croydon@btinternet.com
View all posts by insidecroydon →
This entry was posted in Charity, Church and religions, Community associations, Coulsdon West, Crime, David Osland, Jeet Bains, Policing and tagged Bains, Black History Month, Coulsdon West, Croydon, Guneet Singh, London. Bookmark the permalink.