ZhongRong given another two weeks to save £500m deal

Posted on February 10, 2015 by insidecroydon

Yesterday’s meeting of the Crystal Palace Park Executive Board was due to have been held at City Hall and to be chaired by none other than the Grand High Master Mayor of London himself.

London Mayor Boris Johnson in Boston yesterday: spouting “What time is my flight due” in Greek doesn’t help him there, much, either

It is surely a measure of how unimportant the £500 million ZhongRong Group’s proposal for “the exciting Crystal Palace glass-house” has become for Boris Johnson, as the Tory London Mayor increasingly pursues his own career ambitions, that in the event, a minion was sent south from the Greater London Authority and the meeting was held at the park itself.

With the deal with the Chinese industrialists all but collapsed, Boris was nowhere to be seen. Well, not on this side of the Atlantic, anyway.

ZhongRong’s exclusivity deal with Bromley Council, the planning authority for the park, expired at the end of January.

The press release issued after yesterday’s meeting came under the heading “Long term future of Crystal Palace Park critically important” – a masterful example of the statement of the bleedin’ obvious.

In the release, Stephen Carr, the Conservative leader of Bromley Council who has been left holding this cold turd of a deal by the Mayor of London, announced that ZhongRong has now been given another fortnight (from a letter sent on February 6) to let him know of their intentions.

ZhongRong, who despite having had 18 months under the exclusivity deal which everyone knew was due to expire on February 1, 2015, has now been given until February 20 “to agree to a number of financial and business planning-related conditions prior to the Council considering the renewal of an Exclusivity Agreement,” the statement said.

The Crystal Palace Park Executive Board, Bromley Council’s statement says, “will meet again at the end of February to consider ZRG’s response, and if necessary alternative options for the Park and its restoration”. 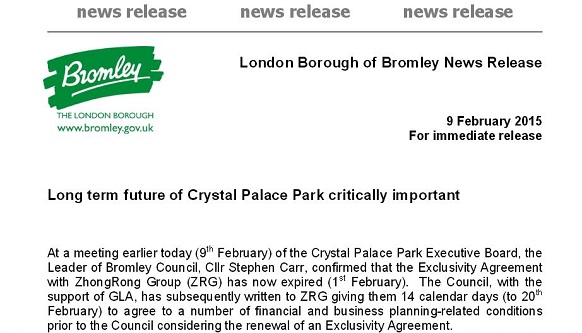 For the people of Crystal Palace and Upper Norwood, “Any decision to enter into a new Exclusivity Agreement with ZRG would require formal approval from [Bromley’s Tory] Council’s Executive.” Though we can guess which way they will bend if ZhongRong come racing back with the means and intention to carry out their original scheme for a 2 million square metres gargantuan green house on the top of a south London hill.

The press release quoted Carr as saying, “We need to reassure local people that we remain resolutely focussed [sic] on doing everything we can to improve Crystal Palace Park and this must include securing its long-term future.

“It would also be wrong to overlook the exciting potential for much needed regeneration in this part of London. This is why we have given the ZhongRong Group the opportunity to agree financial and other conditions which include the preparation of a robust and agreed Business Plan and implementation timetable.”

That sounds less like “last chance saloon” for ZhongRong, and more a “please come back and help us out” desperate plea from a local authority leader without any real, or realistic, other offers to consider for the blighted plot of land where Paxton’s Crystal Palace once stood. If the Chinese read those signals in the same way, they might just try to exploit them to extract even more generous terms than were already available for their absurd scheme.

And it is sure to be something which, in nearby Croydon, Hammerson and Westfield, the developers behind their own £1 billion town centre regeneration scheme, will be watching very carefully.