Regent Land and Developments, a company which specialises in developing brownfield sites, has announced that a building on Surrey Street, including the premises known as Matthew’s Yard, is to be re-built to include a purpose-built café and arts performance space. The company has appointed local music and events firm Hoodoos to run the venue.

Hoodoos previously operated the café at Matthew’s Yard and managed the performance programme there, but they left the venue when the management insisted that another franchisee should have sole rights to the highly profitable drink and food sales.

Matthew’s Yard has operated out of disused industrial space behind some shops off Croydon’s street market since 2012, but the business has struggled and needed tens of thousands of pounds in cash bail-outs from crowd-sourcing schemes on at least two occasions.

Regent Land and Developments want to redevelop the site to build flats overlooking the market street. Their proposed development also includes provision of the arts and catering space in the basement space in 5-9 Surrey Street.

According to a statement issued on behalf of the developers, “Hoodoos will operate a café, artist space, music venue and creative space. They will be taking a 25-year lease at the same rent as they were previously paying, which is a discount on market rent and as part of the terms agreed they will also have a rent-free period to fit out the space to their exact requirements.”

Hoodoos has a proven and successful track record in promoting arts events in and around Croydon. Their events this year include Scream South Croydon and Soda Beat.

Hoodoos are working with Croydon Council and Surrey Street on a music event to take place this December in the market. In 2018, Hoodoos are providing the main stage performances at the South Croydon Food Festival and Summer of Love Festival in Wandle Park. 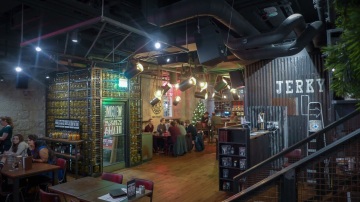 How the new basement venue off Surrey Street might look

“We are fully committed to preserving this space as a cultural hub and look forward to working closely with Hoodoos to make the new Matthew’s Yard a flagship destination for this part of Croydon,” said Pat Maher, Regent’s managing director.

And Richard Hamilton, of Hoodoos, said, “We’re delighted to be looking forward to a bright future for Matthew’s Yard in the same location but in even better facilities to support local performance and creative industries.”

A spokesperson for Croydon Council welcomed the deal, saying, “Following some uncertainty over the summer about the future of Matthew’s Yard, this is an excellent outcome for Surrey Street’s cultural offer.”

News, views and analysis about the people of Croydon, their lives and political times in the diverse and most-populated borough in London. Based in Croydon and edited by Steven Downes. To contact us, please email inside.croydon@btinternet.com
View all posts by insidecroydon →
This entry was posted in Art, Business, Comedy, Dance, Music, Surrey Street, Theatre and tagged Hoodoos, Surrey Street, Surrey Street Market. Bookmark the permalink.