Say it ain’t so, Joe: Lee has changed his tune on policing

ELECTION COUNTDOWN: Croydon’s Tories seem confused about the home address of one of their local election candidates, while another has previously campaigned for more spending on police and youth facilities, when he was a LibDem parliamentary election candidate.
WALTER CRONXITE reports

It is a common theme among voters that they are not certain whether they can believe anything that the politicians say. 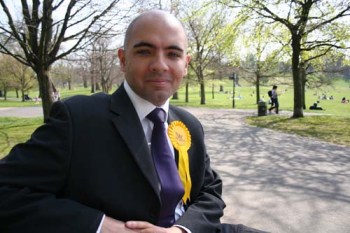 Ahead of the May 3 Town Hall elections, some candidates seeking election in the Tory “target ward” of Addiscombe East seem to have particular credibility issues, since they themselves didn’t necessarily always believe what they have been saying lately either.

The Conservative candidates in Addiscombe East have both previously stood for election for other political parties. Not that any of that has got a mention in their campaign so far.

Given that estate agents are commonly regarded as no more trustworthy than politicians (or journalists), Joseph Lee may discover that the final two weeks of the campaign are a bit of a struggle to find anyone to believe him at all.

Lee is one of those thrusting young Tory activists who for the past few months has been tabling pretty lame questions to Town Hall meetings, and using the occasion to show off his oratorical skills (or lack of them) in the chamber. When he’s not been trying to show how clever he is, Lee’s been relentless in posting selfies or photos of rubbish bags on social media. For these are the sine qua non activities for the wannabe local politician, taken straight from the Barwell playbook of campaigning.

It has now emerged that before he moved to Croydon to become a “local property expert” with Purple Bricks, Lee was a thrusting even younger LibDem activist who in 2010 stood for that party as the parliamentary candidate in Greenwich and Woolwich.

Back then, Lee said that he wanted to “push for a higher level of policing throughout the constituency, this is a key issue when I am on the door step, people are becoming frustrated by a lack of police on the beat”.

Fast-forward eight years, and now wearing a blue rosette, Lee finds himself representing the party which has axed 20,000 police officer jobs across the country and closed all but one of Croydon’s police stations, while trying to deny that that has had anything to do with soaring crime rates. Wonder whether the message he has been getting on the door step in Addiscombe reflects that?

Judging by the reactions of those who read Lee’s badly written pitch for their votes in 2010, he was not altogether convincing.

“God, he really comes across as an idiot,” one said.

As a LibDem candidate, Joseph Lee managed to reduce his party’s vote share

They picked up on Lee’s reluctance to share his home address (he was not a local candidate), “… and he seems to know sod all about the constituency, apart from what he’s read in the papers”. Oh dear.

Even LibDem voters were wary of wasting their X on him. “Is there a way I can vote for the Lib Dems in Greenwich & Woolwich without voting for this muppet?” one asked forlornly.

Another observed: “I actually emailed this candidate to ask questions about him and some of the LibDem policies. I never received a reply. If he can’t be bothered to reply to undecided voters then what hope do we have when he is elected?”

Well, that never happened… The 2010 General Election was the high-water mark of the Liberal Democrats under St Nick Clegg, who then ended up propping up a Tory austerity government for five years. But even given those favourable circumstances and a sitting Labour MP, Nick Raynsford, at the end of 13 years of Blairite government, Lee was such an unconvincing candidate that he actually managed to reduce the LibDem vote share.

Of course, changing political parties in the desperate cause of getting elected is nothing unusual. Winston McKenzie, a candidate in Waddon ward, seems to change his political rosette more often than his underpants, and in the same ward, Labour has a sitting councillor in Andrew Pelling who was once a Conservative MP. In Purley, Donald Speakman, after 16 years as a Conservative councillor, is standing this time as an independent, decades after he served at Brixton Town Hall as a Labour councillor.

But where the political expediency of candidates changing parties might be particularly embarrassing for Croydon Tories in Addiscombe East is that both of their candidates have undergone something of a re-tread. 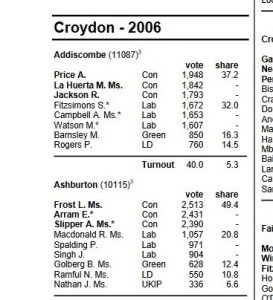 The Ashburton local election results from 2006, when ‘Singh J’ – now better known as Jeet Bains – was a losing Labour candidate

Few voters in what was then known as Ashburton ward 12 years ago might remember a keen young Labour candidate at the 2006 local elections called Jitinder Singh. Despite standing in the ward where he lived, young Singh polled fewer than 1,000 votes that day, at a time when the ward still voted strongly Conservative.

Four years on, and by 2010 Jitinder had become “Jeet”, reinventing himself as the Tory candidate Jeet Bains to stand in the much more winnable (for anyone wearing a blue rosette) Coulsdon West ward. The Addiscombe East resident has been a councillor there ever since.

Using the old technique of deceit by omission, on the Croydon Tories’ website there’s no mention of Bains’ position with Coulsdon West ward on his candidate profile. That’s because he has been squeezed out of that uber-safe Tory ward (renamed Coulsdon Town) to make way for the local Conservatives’ election agent, Ian Parker, as he expects to return to the Town Hall and top-up his £50,000 a year party salary.

Addiscombe East, as it is now and converted into a two-seat ward for 2018, is expected to remain in Labour control, which probably explains why Jitinder/Jeet was heard by Town Hall colleagues to complain about his cruel selection fate, when he described Addiscombe East as “unwinnable”. To lose in your home ward for one party is bad enough, but to lose in the same ward for two different parties is a whole different form of electoral rejection. Ask Winston McKenzie.

Croydon Tories’ profile for Shantelle Francis. According to her official candidate declaration, Francis in fact lives in Forest Hill

Eyebrows have also been raised by another Conservative candidate in a (for them) unwinnable seat, Thornton Heath.

For Shantelle Francis does not even live in the borough of Croydon.

To qualify to stand in local elections, prospective candidates must live or have business premises in the borough. It emerged last week, when the council eventually got round to publishing the statement of nominated persons, that Francis lives at 29 Sunderland Road, London, SE23 2PS – which is Forest Hill, in Lewisham.

That could be a bit embarrassing for Croydon Tories’ record of truthfulness, because on their website, Francis is quoted as saying, “I live on the London Road in Croydon.”

And they wonder why voters find it so hard to believe anything that these wannabe politicians say.

5 Responses to Say it ain’t so, Joe: Lee has changed his tune on policing