Abraham Lincoln once said, “It is better to remain silent and be thought a fool than to open one’s mouth and remove all doubt”. ANDREW FISHER says it is advice a New Addington councillor would do well to follow

The Prime Minister’s speech last week on immigration wasn’t really about immigration. It was about the economy and electoral politics. Every economic failure requires a scapegoat – in the Thatcher and Major years, the Tories blamed trade unionists and single mothers, now they blame welfare claimants and migrants. 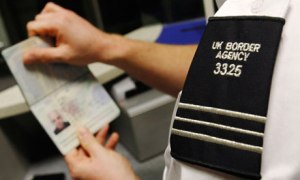 So because the Prime Minister’s Bullingdon buddy is killing the economy, and there’s a growing backlash against the bullying attacks on welfare claimants, step forward immigrants to this country for some cheap politicking at your expense.

Apparently immigrants are taking advantage of British benefits and public services and we need to tighten up the rules. There’s no evidence at all for this, but that hasn’t stopped Tony Pearson (a Conservative councillor for New Addington) brandishing his own ignorance and obsequiousness on the local Tories’ website even more foolishly than his leader managed.

Cameron’s speech alleged that foreigners were coming over here to use our NHS and should be billed for the privilege – stating the NHS could claim between £10 million to £20 million from other countries. His own health secretary told the media, “I don’t think those numbers are at all accurate.”

While we leave the Tories flailing around for the correct statistics to back up their xenophobic dog-whistle politics, let’s consider another angle. The NHS poaches thousands of staff from across the world to work as nurses, midwives, physicians and surgeons in our hospitals. Other countries’ governments paid for the training from which we are benefiting – where is the bill from them to us?

I recently spent several days in Mayday Hospital for the birth of our first child. We were attended to by midwives from the Caribbean, northern Europe, west Africa, and a surgeon from the Middle East – as well as an ethnically diverse range of British-born midwives, anaesthetists and healthcare assistants. As Dennis Skinner asked, are we seriously suggesting that those “of different nationalities can change the bed sheets and operate, but woe betide them if they want to put their head on a pillow when they are ill”?

Our country has benefited massively from migration – and I’m proud to live in a borough like Croydon, raising my new-born third-generation immigrant son in an integrated community that has rejected attempts to divide both established and new ethnic groups.

New Addington councillor Pearson says some immigrants are good while others are bad. That’s probably because they’re human beings, just like indigenous Brits. Yes, of course some will commit crime, as do many British people. Pearson and others seem to expect you can import a master race of upstanding citizens. If, as councillor Pearson believes, “immigration is a good thing for Britain, some may even say a necessity”, then you have to accept that with those immigrants come the same flaws we see in our own society.

However, if we look at the statistics we find that immigrants are more likely to be in work and less likely to be claiming benefits than British citizens. Migrants from the EU’s new member states pay via taxes about 30 per cent more than they cost our public services. According to official Department of Work and Pensions statistics, only 5 per cent of EU nationals in the UK are claiming out of work benefits, compared to 13 per cent of established Brits.

So-called “benefit tourism” is also unlikely to lead migrants to the Britain – our welfare state is only the 18th most generous out of 24 analysed by the Organisation for Economic Co-Operation and Development. So Pearson’s “plans to stop our country’s generosity being abused” might want to start with plans for our country to display some generosity in its benefits system.

Apparently, though, for councillor Pearson, Cameron is addressing “years of Labour’s open door policy in respect of immigration”, which will come as news to all the workers in the UK Border Agency (apparently there was no need for them to be checking passports), the holidaymakers who queued, and to the thousands of would-be immigrants held in detention centres and deported.

Perhaps Pearson should also read up about the million-plus British citizens who are living happily in the EU, including 760,000 mostly retired Brits who live in Spain … for Pearson the strain on Spain can remain. The open borders between EU countries are a mutual benefit we should welcome.

Ironically, at his meeting on welfare, local Conservative MP Gavin Barwell challenged people in the audience who suggested immigrants should not have access to benefits or the NHS, saying, “I don’t want to live in a country where someone is lying in the street and we say ‘not my problem, guv’.”

While Barwell says that he’s prepared to stand up to racism in his constituency, he’s strangely silent on the same divisive politics in his own party. If Barwell wants to have a quiet word with Messrs Pearson and Cameron, may I suggest the words of Abraham Lincoln: “It is better to remain silent and be thought a fool than to open one’s mouth and remove all doubt”.

But this isn’t a debate interested in facts, it’s about restoring to the Tory ranks the xenophobic and sometimes outright racist vote that has defected to UKIP.

Pearson’s claim that “Labour are [sic] still the party of mass immigration” is just a sanitised version of the 1964 Smethwick Tory slogan “if you want a nigger for a neighbour, vote Labour”. But if you have nothing to offer the electorate other than economic failure and falling living standards, then you have to resort to fear.

With migrants bringing in more in taxes than they receive in benefits and services, it is a grotesque slur for politicians to blame them for stretching benefits and services. They should instead be using the additional revenue wisely to ensure that there is sufficient housing, welfare and healthcare for all.

Just a couple of days before the Tories give the richest 1 per cent in society a tax break, maybe we should ponder whether the problem is too many incompetent politicians rather than too many immigrants?

News, views and analysis about the people of Croydon, their lives and political times in the diverse and most-populated borough in London. Based in Croydon and edited by Steven Downes. To contact us, please email inside.croydon@btinternet.com
View all posts by insidecroydon →
This entry was posted in New Addington, Tony Pearson and tagged Cameron, Croydon University Hospital, Dennis Skinner, European Union, National Health Service, New Addington, NHS, Tony Pearson. Bookmark the permalink.