Rooney’s long wait for gold ends in triumph in Zurich 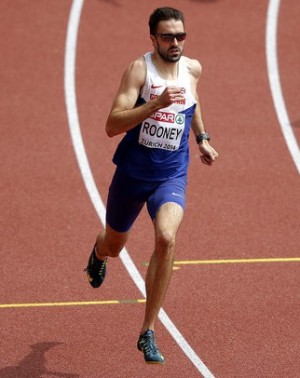 Croydon’s Martyn Rooney finally fulfilled his promise tonight by claiming the European 400 metres title in Zurich, the first international gold medal of his senior career. “It’s been a long time coming,” he admitted after his lap of honour around the Letzigrund stadium.

The Thornton Heath-born sprinter led a British one-two, driving home hard from 250 metres out to come into the finishing straight three metres ahead of his team mate, teenager Matthew Hudson-Smith, and having the strength to hold on to finish in 44.71sec, the fastest time by a European in 2014, and win by 0.04sec.

The third Briton in the field, Conrad Williams, finished fifth in 45.53.

After a wait of 45 years for an individual gold medal for a Croydon Harrier at the outdoors European championships, Rooney’s is the second of the week, following James Dasaolu’s 100m victory.

Both men now have strong chances of winning relay golds over the weekend, too.

Although he has been based in Loughborough for training for the past few years, the 6ft 6in tall Rooney is a real product of Croydon. His mother taught at St James the Great primary school, where her son’s athletics talents were first spotted and led to him training at Croydon Arena with the local club even before he began attending John Fisher secondary school.

In 2005, after converting from middle distances to the one-lap sprint, Rooney won the silver medal at the European junior championships, and the following year broke the British junior record which had been held by Roger Black for 20 years. When he made his Olympic debut in Beijing two years later, placing sixth in the final, great things were expected of him.

But until tonight, the pinnacle of his achievements has been international relay silver.

“I’m delighted to win it. It’s been a long time coming,” Rooney said.

“I’ve never actually won a championships in my life, apart from the British trials. It’s great to win on the European stage, with a European lead [time]… I’m pretty happy.”

Rooney must have feared another trophy-less season – he’s an avid Crystal Palace fan, so is familiar with the sensation – after he left the Glasgow Commonwealth Games two weeks ago empty-handed following a disappointing run in the individual 400m and passing the chance to run in the English 4x400m relay team. By doing that, Rooney unwittingly turned his back on a famous gold medal run.

Tonight, Rooney broke the 45sec mark for the ninth time in his career, a sign of his true international class.

“I don’t know about it looking effortless – I’ve been very fortunate to be part of the British system for a long time, and it’s starting to pay off.”

Inside Croydon: Croydon’s only independent news source, based in the heart of the borough: 407,847 page views (Jan-Jun 2014) If you have a news story about life in or around Croydon, a residents’ or business association or local event, please email us with full details at inside.croydon@btinternet.com

News, views and analysis about the people of Croydon, their lives and political times in the diverse and most-populated borough in London. Based in Croydon and edited by Steven Downes. To contact us, please email inside.croydon@btinternet.com
View all posts by insidecroydon →
This entry was posted in Athletics, Croydon Harriers, James Dasaolu, Martyn Rooney, Sport and tagged Croydon, Croydon Harriers, Martyn Rooney, Thornton Heath. Bookmark the permalink.