Brick by Brick is failing to deliver on affordable homes pledge

Croydon’s chief executive, Jo Negrini, is “taking the piss”, according to a former senior Town Hall official, by pushing through extra planning meetings during the purdah period leading up to the General Election, while residents affected by a private scheme which was granted permission at last Thursday’s planning meeting complain that the council is “taking them for mugs”. 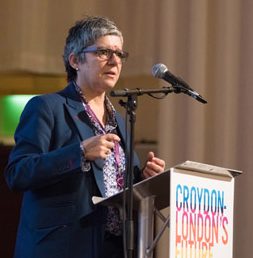 There are another five planning meetings scheduled between now and June 22, the first of which is next Thursday.

There, the Labour-run council is expected to push through plans for another 63 homes to be built by the council-owned development company, Brick by Brick. The committee will also consider a controversial scheme from another developer for the site of the former Taberner House which encroaches on to the public open space of Queen’s Gardens (click this link for the council report).

And all this while there is an on-going investigation into complaints about the conduct of the planning committee’s chair, Paul Scott.

Scott was again in charge of the most recent meeting in the Town Hall chamber on Thursday night, at which 103 more Brick by Brick homes were granted permission, all watched over by Alison Butler, the council’s deputy leader and cabinet member for housing, who is married to Paul Scott. According to Negrini, Butler has nothing to do with Brick by Brick.

The four Brick by Brick schemes considered on Thursday, plus a private development on South Norwood Hill put forward by Whitgift Estates, saw the committee voting 6-4 or 6-3 in favour on every agenda item, each time with the votes carried by the majority Labour group on the committee (Tory councillor Chris Wright managed to miss one vote).

And to think that “whipping” along party lines is supposed not to be allowed under planning law.

The use of Negrini’s pet housing scheme, Brick by Brick, to get round Tory Right-to-Buy housing laws is clearly a deeply political piece of local authority machinations, yet planning applications for the company’s schemes continue to be put before the committee during the purdah period, under which Negrini has shutdown virtually all other functions of elected councillors.

Another highly politicised planning application, that for the massive Hammersfield supermall, will also be considered at a special meeting called for May 24.

“We are told that planning decisions are not political and I suppose they would therefore be exempt from purdah,” said David Wickens, who served in a senior position on Croydon Council for many years. “However to add in a special meeting on May 24 rather than wait until after the General Election on June 8 does seem to be taking the piss.”

The council’s annual meeting, at which cabinet jobs and committee membership is announced, is on May 22. “A short delay would allow any new committee members to better grasp the details of the proposals and the reponsibility they have for the future of the town centre,” Wickens said.

According to another Katherine Street source, rattling through the Brick by Brick applications while many on the council are distracted by the General Election campaign is making Butler and Negrini look as if they are in a hurry. “There must be some time limit on the arrangements for the building company’s financing,” said the councillor.

By rushing the applications through, Negrini and Butler – who has nothing to do with Brick by Brick, of course – are also denying the planning committee members, other councillors and residents reasonable time to consider or respond to some of the far-reaching consequences of some of the schemes.

Nor does it give anyone the chance to highlight that the council-run housing company Brick by Brick is, block by block, breaking Butler’s promise that at least half of the 1,000 homes it plans to build should be “affordable”.

Of the four planning applications submitted on behalf of Brick by Brick last Thursday, the developer was given permission to avoid having to provide any affordable housing at three of them.

Thursday’s Brick by Brick applications were for Malling Close children’s centre, near Long Lane, for 41 flats; on the site of the former Homefield House residential home in Old Coulsdon, where Brick by Brick wants to cram in no fewer than 14 houses and 10 flats, all for lucrative private sale; for 13 houses and 15 flats, all for private sale, at Ravensdale Gardens, Upper Norwood; and for 10 flats for private sale on the site of some garage blocks in Thornloe Gardens on the Waddon Estate.

Only at the first site, Malling Close, does Brick by Brick propose meeting its promise of delivering 50 per cent affordable housing. At the other three, it wants to provide its share of affordable housing offsite – meaning somewhere else where the profits are likely to be much less.

Yet the council has had all the Brick by Brick sites reviewed by an independent viability consultant. The report to the planning meeting stated that the consultant, referring to the schemes on the agenda and others, had “concluded that, after taking into account a number of different factors and contingencies, the seven major applications might well be able to support the following provision of affordable housing at a policy compliant mix”.

Scott’s committee ignored this, with its Labour councillors voting through plans for three schemes to be built without any affordable housing on site.

Was this voting by the planning committee on party lines?

Consider this: one application, to build on the site of some garages on Thornloe Gardens on the Waddon Estate, was called in to the planning committee with objections over overdevelopment from one of the Labour councillors for the ward, Andrew Pelling. Yet on Scott’s committee, voting the proposal through with five other Labour councillors was one of Pelling’s ward colleagues, Joy Prince.

South Norwood residents protested at Thursday’s planning meeting. They say they were denied adequate opportunity to register their objections

At least that application was moderated in small part. Brick by Brick’s proposal would have seen the Waddon Estate get its first private “gated community”. Thursday’s planning meeting insisted on the removal of the gate.

That was not enough to avoid accusations of “Gentrification!” shouted from the public gallery.

“Shame on you,” called out another angry resident. There was another rejoinder, aimed at Scott: “We know you’re under investigation.” It must have come from Inside Croydon‘s loyal reader.

It was not only Brick by Brick applications that prompted residents’ anger over the overdevelopment of their communities.

“We’re not voting for Councillor Bee again,” called out one resident, referring to South Norwood councillor Kathy Bee, another Labour member of the planning committee who dutifully voted in the interests of a private developer.

“Good to know Croydon Labour councillors do not listen to the voters,” said another resident from South Norwood. “Glad I left the party.”

The developer of that scheme, at 139 South Norwood Hill, is Whitgift Estates, a New Malden-based builder (not to be confused with the Whitgift Foundation). A similar, previous application, submitted last November, was refused.

This time they had their plan approved to knock down a substantial, 1930s-built detached four-bedroom family house and replace it and its large gardens with nine flats in a couple of blocks, while providing only five car parking spaces.

This has little to do with “solving the housing crisis”. The property speculator’s economics are straightforward: a family house in this location, once done-up, might sell for £1.2million to £1.5million. Nine flats flogged on the private housing market for £300,000-plus each could turnover at least twice as much.

It was this kind of overdevelopment and loss of family houses, as they are replaced by developers building profitable small flats, often transforming the character of whole streets and neighbourhoods, which Labour had specifically identified as something they would halt if they won control of the Town Hall.

Residents have complained that in this case, they were denied reasonable notice in order to gather objections. “The developer was able to put in new amended plans on April 28 that were accepted the on May 2. Over a bank holiday weekend?” They describe the council’s planning department’s ability to push this through so quickly as “quite unbelievable”.

Without being notified of the planning application, residents were given less than nine days to respond. “Someone must be cutting corners somewhere,” they say.

Nonetheless, this one application amassed 104 applications in just over a week. Scott’s planning committee still voted through the scheme. “If the council can ignore this, something is seriously wrong. and they really don’t care,” Jonna Saarinen, one of the objectors, told Inside Croydon.

The other major complaint from residents at the latest in this spate of planning meetings is the length of time that the over-loaded agenda can take. On Thursday, the committee only got to the final application, for the Waddon development, after almost four hours.

“As if people want to sit through hours of talking about architecture and looking at diagrams after a day at work,” said one of those who patiently sat through the whole thing.

“There’s not really any chance for people to oppose any of this.”

Which might be where you think that ward councillors might intervene on behalf of the people whom elected them. Only with Negrini’s council planning department, aided by Scott and Burtler, that doesn’t seem to be working very well for ordinary residents, either.

“There are so many developers in Croydon doing what ever they want, like what happened with the Ship pub in South Norwood, and it really seems that the council does nothing,” Saarinen said.

“I feel like we are being taken as total mugs by the council.”

Some residents are considering appealing against Thursday night’s planning committee decision, on the grounds that the council had failed to advise them properly or provide due notice of the application.

But in Jo Negrini’s version of Carry On Building, those sort of considerations are clearly unimportant.