Posted on February 6, 2018 by insidecroydon

A couple of Croydon pensioners are being dragged to the Royal Courts of Justice this week by one of the world’s richest royal families, who want to ban them from exercising that old British tradition of freedom of speech. 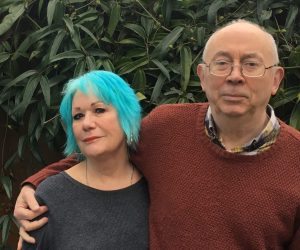 Banned: Ian Bone and Jane Nicholl. The Qataris don’t want them near the Shard

The Qatari owners of The Shard want a High Court judge to issue an injunction against Ian Bone to stop the 70-year-old activist carrying out a protest at Europe’s tallest building. Bone wants to draw attention to  the obscenity of The Shard’s £50million luxury apartments, 10 of which have stood vacant since the tower opened six years ago.

The case is due to be heard on Thursday, the same date that Bone had announced for the protest.

As well as The Shard, the Qataris own the site of Chelsea Barracks, the Olympic Village and Canary Wharf, along with Harrods and No 1 Hyde Park, the world’s most expensive block of flats, and they are the biggest share-holders in Barclays Bank.

In fact, the Qataris now own more of London than the Queen.

But they still want old age pensioner Bone to pay their legal costs, currently listed as more than £500.

Bone and his partner, Jane Nicholl, could even risk losing their South Norwood home if they fail to meet the billionaire Qataris’ demands in court. 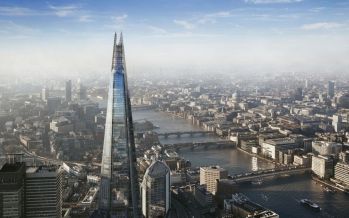 The Shard, built at a cost of £435m, and opened in 2012. Ten sky-high apartments remain unsold

Bone is a long-time political activist and inveterate pomposity-pricker. Bone and Nicholl are well known among their local community, and are the co-founders of the South Norwood Tourist Board.

They are also prominent members of the anarchist group, Class War. Ten years ago Bone published his autobiography, Bash the Rich: True Life Confessions of an Anarchist in the UK.

Class War has in the past staged protests against “Poor Doors”, where property developers build entrances for their private apartment-owners which provide separate access to the building from those who live in social housing which the developers have been obliged to include.

Now Bone is turning his attention to the 72-storey Shard by London Bridge, a glistening symbol of vast wealth built in a city with a vast problem of homelessness.

Bone, who has himself been homeless and is a former resident of Grenfell Tower, started posting calls on social media last week for what he describes as a “noisy, but peaceful” protest outside The Shard.

Less than 48 hours after making the Facebook post, Bone was issued with a summons to appear at the High Court.

Bone’s Facebook posts were included in evidence filed at the High Court by lawyers acting on behalf of The Shard’s owners. These included one Bone message which stated: “Obviously THE AIM IS TO OCCUPY THE EMPTY APARTMENTS eventually but the first couple are more likely to be battles over space, where the cops and management want to stick us and where we want to go”.

Bone told The Grauniad: “We just wanted to highlight the growing and worrying inequality in London, with all these empty towers for rich people and no homes for thousands of us. Dozens of families from the Grenfell Tower tragedy are still without permanent homes.”

It was The Grauniad which revealed last July that all 10 of the apartments built towards the pinnacle of the tower, at least one of which was initially marketed for sale at £50million, remain unsold and empty.

The Guardian reports today: “Evidence filed by the Shard’s owners at the High Court includes a detailed ‘intelligence report’ on Bone compiled by private security firm VSG. The report described Bone as the leader of anarchist movement Class War, and said he ‘walks with a cane and generally is belligerent and uncooperative when interacting with persons of authority, such as police officers and security officers’.”

The security report also warns that activists could use “pyrotechnics and large, offensive banners of a derogatory nature”.

Bone uses the walking stick because he is unable to walk without it. He has had Parkinson’s disease for the past decade. He denies ever using his stick to hit anyone.

“My pension is £154.56 a week,” Bone announced on Facebook, launching a legal fighting fund.

“The Qatari royals are taking me to the High Court of Justice to stop me and persons unknown protesting outside their Shard about their empty luxury apartments. Some Grenfell people are coming. I lived in Grenfell and was later homeless myself.

“The Qatari royals feel they can stop protest in the UK over their obscene 10 £50m empty apartments while 70 Grenfell families are still in hotels and 4,000 sleep rough in London every night.”