House-builders Barratts have agreed to pay the £2million bill to replace the unsafe Grenfell-style cladding on the Citiscape development in central Croydon. 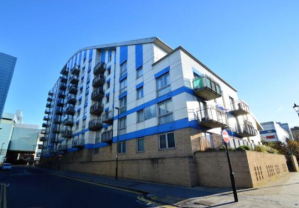 Citiscape, on Frith Road: the cladding is the same as that used at Grenfell Tower

The move, announced last night, was immediately claimed as some sort of victory by the Tory Government, who had so far sat on their hands and refused to intercede in the matter, which potentially wiped tens of thousands of pounds from the value of the leaseholders’ homes, exposing them to financial ruin as they faced massive repair bills following a tribunal ruling last month.

It might just be coincidence, but Barratts’ sudden outbreak of altruism towards the Croydon residents came a couple of days after news of a potential High Court class action, brought by the owners and leaseholders against the developers and builders who have installed the unsafe, flammable cladding around the buildings. Such an action had the possibility of being extended to all 306 affected tower blocks in the country.

Cladding is regarded as one of the principal causes of the high death toll at Grenfell Tower in Kensington last year, where more than 70 people lost their lives in a conflagration which could not be controlled.

Emma Dent Coad, the Labour MP for the area around Grenfell, last night congratulated her Labour parliamentary colleague, Steve Reed OBE, for his campaigning on behalf of his Citiscape constituents, saying, “Very well done Steve Reed: cladding replacement at Citiscape paid for by those who specified and installed it.”

For his part, Reed tweeted, “We won! Fantastic news, developers agree to replace flammable cladding on Citiscape after my long campaign with residents – but this doesn’t let callous Tory government off the hook for doing nothing to help hundreds of other blocks.”

One of the leaders of the Citiscape residents’ group posted on Twitter, “All the residents of Citiscape thanks to @SteveReedMP for their support through all this.

“Steve relentlessly provided his support to us. He worked with us day-in, day-out on each and every front.

“We also thank Barratts to for their goodwill gesture and saving so many homes and lives. All the builders – open your eyes. Make a sustainable humane society.

“Our work is not finished here. No one in this country should feel unsafe. I will keep on working on this issue until and unless each and everyone feels safe in their homes.”

Cladding on Citiscape, a 95-apartment complex on Drummond Road, failed safety tests conducted last August in the wake of the Grenfell tragedy.

Barratts have now said they will cover future and backdated costs relating to employing a fire warden and the removal and replacement of unsafe cladding from the building. The move may be seen as setting a precedent for other blocks around the country.

Certainly, the Tory government whose housing ministers – including former Croydon MP Gavin Barwell – did nothing to alter building regulations which allowed the unsafe cladding to be used, and they failed to implement recommendations for the installation of sprinklers in tower blocks, will be relieved that Conservative Party donors – which is what Barratts are – have agreed to take responsibility.

“I want to see all leaseholders in this position get the peace of mind they deserve and I am keeping this under review.”

News, views and analysis about the people of Croydon, their lives and political times in the diverse and most-populated borough in London. Based in Croydon and edited by Steven Downes. To contact us, please email inside.croydon@btinternet.com
View all posts by insidecroydon →
This entry was posted in Croydon North, Fairfield, Property, Steve Reed MP and tagged Citiscape, Croydon North, Fairfield, Steve Reed OBE. Bookmark the permalink.