Posted on December 10, 2018 by insidecroydon

WALTER CRONXITE reports on signs that at least one political party in the borough is gearing itself up for a General Election (yep, another one) 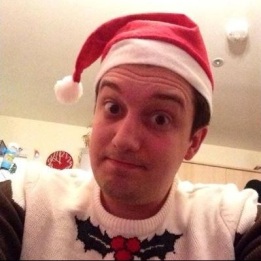 Members of Croydon’s Conservative Party will meet tonight to choose a candidate to contest the Croydon Central parliamentary seat which Gavin Barwell lost in 2017.

Barwell, employed since that election defeat as the chief of staff to Prime Minister Theresa Mayhem – and isn’t that working out peachily? – is understood not to be among the three shortlisted candidates.

But Mario Creatura, Barwell’s gobby fac totum when he was an MP, is seeking the support of his Croydon party colleagues.

Creatura is a councillor for Coulsdon Town who avoids holding regular ward surgeries for residents, and is the Town Hall opposition group’s chief whip (duties for which he receives a total of £17,986 per year in publicly funded allowances). Just over a year ago he was hired as a Downing Street SPAD – a special adviser – on up to £70,000 per year of tax-payers’ money, basically looking after the PM’s Twitter feed, a job he was recruited to by Barwell.

Given the latest parliamentary crisis created by his boss and his boss’s boss, Creatura may arrive for tonight’s Croydon selection meeting a tad preoccupied.

But at least he has made the shortlist, which is more than can be said for his fellow councillor, Vidhi Mohan. Mohan does have previous experience of being a parliamentary candidate, though he made such a mess of things when standing in Croydon North in 2015 that his failure to make it into the final reckoning for the more winnable Croydon Central is perhaps understandable. 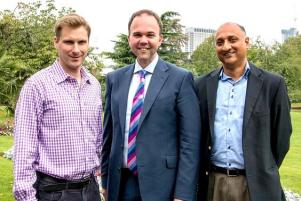 Only one of these three is likely to be an MP any time soon: Chris Philp and Lord Barwell of the Whitgift Foundation, with Vidhi Mohan in 2015

The absence of Barwell, though, strongly suggests that even the Tories don’t think that they can quickly take back the seat which was won 18 months ago for Labour by Sarah Jones. It also leaves Barwell with a problem of finding himself a safe Tory seat should he wish to make a speedy return to the Commons – though a peerage for gaffe-prone Gav in Theresa May’s dissolution honours might be a more likely scenario the way things have been going at No10.

Certainly, the Tory party nationally appears to be on an election footing, with candidate selections going ahead in other constituencies and activists out and about canvassing the public, as Croydon Tories were at the weekend.

Few Croydon Tories will have been delivering Barwell’s Brexit leaflets, though, and the disconnect between the grassroots membership and the party’s leadership will have done nothing to improve Creatura’s chances of selection tonight. 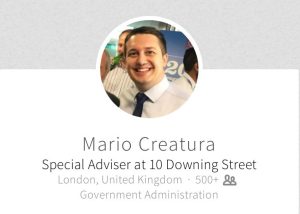 Official confirmation, via Linked In, that the country’s going to the dogs

Indeed, perhaps in an attempt to distance himself from May’s disastrous premiership or the Brexit conundrum, Creatura’s own Twitter profile contains no reference to his Downing Street job.

With characteristic vacuity, Creatura describes himself as “a proud Croydonian”.

He has been a energetic Tory activitist since leaving Royal Holloway College with a Classics degree nearly 10 years ago. From his bachelor pad home just off Surrey Street he has made various attempts to ingratiate himself with the broader community in the borough, such as volunteering as a “mentor” with the high-profile Lives Not Knives charity (and offering the charity’s founder, Eliza Rebeiro, selection as a council candidate in a safe Tory ward, an offer she shrewdly declined). 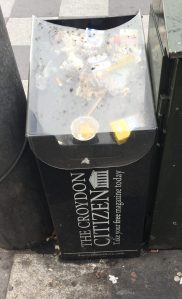 A mess of Creatura’s making

Creatura also appeared as one of the founders of the Croydon Shitizen, a short-lived astro-turfing website and doomed freesheet which was set-up possibly with party political funding after some urging to the local Tory party by Barwell and his chums.

Although Creatura’s involvement was obvious, and has been confirmed by sources who worked with the publication, reference to his close connection was swiftly removed, and he and his stooges continued to deny he had any role in order not to sabotage its (bogus) claims of being impartial or “apolitical”, rather than its true purpose: a right-wing rag to shore up Barwell and the Conservatives in the Town Hall.

Croydon Tories are clearly somewhat nervous about the outcome of tonight’s selection meeting. The local party’s leader, Tim Pollard, refused to respond to Inside Croydon’s questions about the selections, though other sources have confirmed the meeting will definitely be taking place. But then, the Tories don’t have a great track record lately about things they say will definitely take place… like the Commons vote on May’s (and Barwell’s) Brexit deal.

Selection for the Tory candidate to replace Steve O’Connell in the London Assembly elections in 2020 is to take place next month, when Sutton Conservatives will also be involved. Inside Croydon has been unable to confirm yet whether independent Sutton councillor Nick Mattey will be among the candidates, although Joseph Lee – the former FibDem who failed to win a council seat in the Croydon local elections last May – and Councillor Simon Hoar – an occasional delivery boy for incinerator operators Viridor – are expected to seek selection.

2 Responses to Tory Creatura and Croydon’s nightmare before Christmas