Since Brick by Brick was formed by Croydon Council in 2015, it has not yet completed a single new home. In the Town Hall chamber on Tuesday night, the company presented its latest business plan, which proved to be a perfect match for all of its buildings: unfinished.

Brick by Brick’s document was meant to be discussed and debated by the council scrutiny committee. But when the report was made available, the councillors discovered that few of the vital figures could be relied upon. “Brexit uncertainty” has cast a dark cloud over the housing market and the prospects for Brick by Brick, apparently.

The meeting was unsatisfactory in other respects, too, not least because two of the opposition Conservative councillors who sit on the committee, Luke Clancy and Richard Chatterjee, didn’t even bother turning up or arranging substitutes to attend and provide the degree of scrutiny that £700million-worth of council property and borrowing requires. So much for “opposition”.

The Tories’ shadow cabinet member Lynne Hale was there, but she didn’t add much value.

What the business plan did manage to confirm, officially, was that Croydon under Labour council leader Tony Newman and his deputy, Alison Butler, will have built not a single council home between the time they took control of the Town Hall and 2022.

What they will have built, using council-owned land and property and financed with hundreds of millions of pounds of public cash, will be hundreds of flats and houses for private sale.

Colm Lacey: has kept back Brexit analysis from Brick by Brick’s business plan

In the report, on page seven, under the heading “Market Analysis and Business Risk Assessment”, an office junior had been working overtime with a yellow highlighter pen, creating an amber warning to readers that none of the figures in the document could be relied upon.

“Note,” it said. “All figures to be updated with latest market analysis (inc Brexit) currently underway,” was the written caveat.

There was a further health warning later in the report, on page 14, on the company’s financial projections. “All figures to be updated post-updated market analysis and approved by BXB board,” it said, in a resounding two fingers to the elected councillors at the scrutiny committee, to which the company is supposedly accountable.

The Brick by Brick board of directors, it should be noted, include two senior Croydon Council employees, Colm Lacey – who doubles-up as Brick by Brick’s managing director – and finance exec Lisa Taylor.

“Given all the important figures are to be updated, and the board of directors has chosen not to share its Brexit analysis with the councillors, it sort of renders this business plan pretty worthless,” one Katharine Street source said after the meeting.

Another Town Hall figure who watched the proceedings said, “The figures presented to the committee are currently just guesswork. That’s not great for a company that is handling more than £700million of public assets.” 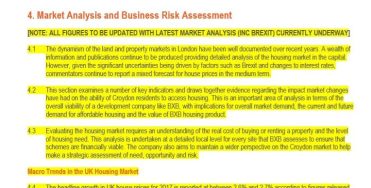 The ‘amber warning’ in Brick by Brick’s business plan

The committee members who did bother turning up on Tuesday night seemed concerned around potential risks, and they asked about these. What is in the business plan identifies the key risks, but it fails to provide much evidence of how they are being managed and mitigated.

Of course, it is possible that Lacey, Taylor or some of the other Brick by Brick employees may have drafted a specific risk register, But no one from the housing company nor the cabinet member responsible for housing, Butler, thought that this was worth sharing with the committee.

The report’s authors were forced to admit that one of Brick by Brick’s biggest schemes, dubbed College Green, next to the Fairfield Halls, has had to be scrapped and sent back to the drawing board, as Inside Croydon exclusively revealed last year, after the company failed to buy property from Croydon College (though they don’t mention that bit in the report). 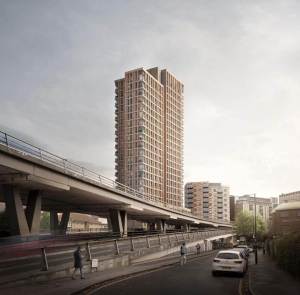 What the report did provide was the news that the housing company which is yet to complete a single new home, now won’t be handing over the keys on its first site, at Auckland Rise in Upper Norwood, until March this year.

That’s a month later than the January/February projections suggested by Brick by Brick until just before Christmas, and once again highlights the slow progress made by the company, which was supposed to be providing new homes from the middle of 2018.

According to Brick by Brick’s own business plan, it should be delivering 246 units in 2019.

Brick by Brick explains this away by offering that other homes, to be delivered between 2020 and March 2022, will have a greater number of affordable properties in the mix. Even so, and by Brick by Brick’s own admission, it still will not meet its 50 per cent affordable target.

And not one of the Brick by Brick homes will be a council home. That’s despite around £36million of funding having been in the council budget in 2014 specifically to build council housing over the course of six years. That money was quickly re-directed by the Blairites in the new Labour council towards the Brick by Brick project. So effectively, by 2022, Croydon’s council homes fund will have helped to subsidise the building of 571 homes for the private market.

How the realities of “award-winning” (according to Croydon Council) Brick by Brick are at odds with the sunny uplands promised back in 2014. Newman’s Blue Labour group had just got elected, and  they borrowed the idea from Newham, where “regeneration practitioner” Jo Negrini had been working. Negrini, of course, is now Croydon Council’s chief exec.

A council report proposed the idea of a private company to be formed to try to get around the obstacles created by Tory (and Labour) governments over the use of the Housing Revenue Account and the Thatcherite “Right To Buy” policy. The report’s authors were Butler and her cabinet colleague, Simon Hall, together with Negrini, then a mere executive director of development, and Richard Simpson, the council’s finance director.

“Not only is there a need for more affordable homes but these homes also need to be more affordable,” they said then, identifying that “affordable” housing, when pitched at London rents and prices, is usually anything but.

According to the 2019-2020 business plan made available this week, what Brick by Brick is delivering is around 250 homes for shared ownership (which has a reputation for being a particularly pricy way for people to get on to the housing ladder), and a similar number for social rent through a housing association. Not one will be a council home. 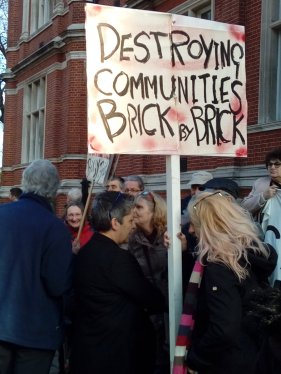 Of the 43 sites listed in the business plan for development by 2022, 31 are exclusively private homes, or wholly social housing. Only 12 sites a mix of tenures. On one site, Brick by Brick wanted to create a gated community for the 10 private homes in Waddon, until they were forced to back down through objections from existing residents and their ward councillors.

“It’s a pernicious form of social segregation which Labour local authorities have fiercely objected to when private developers have proposed ‘poor doors’ in their blocks,” our Town Hall source said.

“Mixed tenure and tenure blind is what should be expected in this day and age. Yet here we have a Labour council’s building company being allowed to created segregated housing.”

For many, the proposals by Labour London Assembly Member Tom Copley to scrap Right To Buy cannot come soon enough.