Boris’s cunning plan: too high, too many, too central

Posted on September 29, 2012 by insidecroydon

CROYDON COMMENTARY: The Mayor of London’s “cunning plan” for Croydon is flawed in important respects, says ANDREW PELLING – too much housing crammed into the centre of the borough, in too many high-rise blocks, and by ignoring other parts of the borough

It needs a plan to take itself out of a rapidly accelerating spiral of decline. That decline, highlighted by a shuttered and closed Allders, is an all too real living criticism of our Town Hall bosses.

Boris Johnson, like his predecessor as Mayor of London Ken Livingstone, is keenly aware of this decline and has taken the risk of saying that he’ll make sure Croydon sorts these things out, otherwise his second term in office will be considered to be a failure.

In May, shortly after being re-elected, Johnson told the London Assembly that, “I will consider the next four years a failure if we have not sorted out this issue in Croydon. We have got to get these developments moving.”

Unlike local Conservatives, City Hall recognises that there is a crisis in Croydon.

City Hall is working with Croydon on a plan, but it makes the good start in recognising that there is a serious problem:

“The Croydon Town Centre Opportunity Area (COA) has excellent transport connections; it is a well-established commercial, retail and civic offer; along with great opportunities for growth.

“Over the last 30 years, however, the COA has failed to attract major investment resulting in a decline in jobs, increased vacancies and poor maintenance of some buildings and public realm. Today the regeneration of the COA has never been more important. Urgent repairs are necessary.” 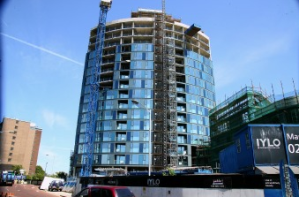 It is a message that is all too familiar to the regular reader of Inside Croydon.

The Mayor’s Office’s plan for central Croydon is just the latest in a library’s worth of schemes, plans and masterplans that have been expensively compiled over the last decade or more, all with equal impact. Or lack of it.

That a planning framework is being put in place is to be welcomed.

Those who have written the plan should be congratulated on work which brings cross cutting issues together well.

Many European cities benefit from high density housing built mainly around extensive terraced development, in blocks of between four and six storeys, and this would be a worthy model for Croydon.

The draft plan also permits “tall” development, but I fear this is a very serious planning error in terms of sustainability and the promotion of urgently needed affordable housing.

While the plan does express caveats about the merits of tall buildings, I believe that there should be a presumption against new tall tower block housing. There is a recognition in the plan that if tall buildings are to be in place, they need to be of high quality. This underlines the expense of building tall sustainable housing. Mid-height development may well deliver housing target numbers quicker and more sustainably.

There are monumental examples around central Croydon of why tall buildings are rarely the solution for Croydon.

Altitude 25 has struggled since its development to secure a significant occupation rate. The initial developer went into bankruptcy, and its present owner recently was forced to apply for permission to continue to attempt to market its unsold properties as long-term lets.

The IYLO Tower remains uncompleted after bankrupting a series of property speculating developers.

Meanwhile, no development has commenced on other skyscrapers which have acquired planning  permissions.

It may well be that there is little demand for top-end, high-living cosmopolitan executive apartments in Croydon and that mid-rise, higher density housing will be of a greater interest to existing Croydon residents seeking family housing. The doubling in the number of children seeking places at schools in the north of the borough – a growth unanticipated by the people in charge at Croydon Town Hall – strongly points to the need for family housing that some might judge is not provided in smaller flats in high-rise buildings.

Of course, restricting new building to mid-height developments (excluding the conversion to residential use of empty high-rise office stock, of which Croydon has a surfeit) might reduce land values. Yet I believe that granting planning permissions for tower blocks will prove to be a cul-de-sac for Croydon, as mid-sized development over a wider area will prove to be more sustainable.

Mid-rise homes may also be of a more human scale and avoid the forbidding, wind-tunnel effects that deter pedestrians from areas around developments such as Altitude 25.

Town centre student housing would provide a welcome boost to Croydon College and to the local economy.

The 17,000 target housing figure is partly to do with party politics from a ruling Conservative administration that mainly represents voters in the south of the borough and wants to concentrate additional housing in central and north Croydon or on the vacant site at Cane Hill in Coulsdon.

It is noticeable that the Mayor’s office’s draft plan does not provide for a more reasonable balance of development across the borough.

Yet common sense suggests that a 12-fold increase in population numbers in central Croydon will always be more achievable than the unrealistic, 17-fold increase proposed by the Croydon Council masterplan.

It may well be that a reduced housing target would be more reasonable with some of those new homes transferred from central Croydon’s target figure to lower scale developments built to the south of the borough, near transport hubs in Purley and Coulsdon, which also have struggling district shopping areas and need new housing to boost their struggling retail economies. 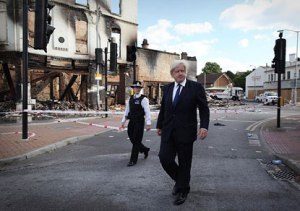 Boris Johnson visiting Croydon after the riots last year: his plan, and £23 million recovery fund, is focused on areas that were not so badly hit as London Road or the Old Town

A lower target would also be more sustainable since there is limited space in central Croydon, and little included in the various plans, for the public services provision – schools, GPs, sewage – that only has to cope with 1,000 residents currently.

It may be necessary to widen the Croydon Town Centre Opportunity Area to encourage higher density development at a mid height scale.

The unrealistic, unsustainable and unwanted “tall” component needs to be removed from the plan for new buildings, as I doubt that this will work for Croydon other than satisfying any lingering nostalgia for when Croydon’s 1960s brutalist concrete architecture brought us prosperity in very different times before the M25 was built and the government subsidised east London office developments.

As far as the West Croydon area is concerned, it seems that this often overlooked area is to be consigned to being a “Northern Fringe” in the plan.

The council seems to think that if Croydon is going to get its economy kick-started, it had better do this in an area they call “Croydon New Town”. The area between East Croydon, the Wellesley Road and Lunar House.

This is a missed opportunity, overlooking the developments of the past decade. Greater attention should be given to promoting a return that has not yet been realised from the extension of the East London Line to West Croydon.

The area already benefits from a great diversity of ethnic food shops that could be aided by a much-improved street scene – tidied and regularly cleaned pavements, co-ordinated shop frontages – and the removal of through traffic from St James Road southwards. An attractive “shop the world” offer – think Spitalfields or Brick Lane – would draw visitors from across London.

The extension of a pedestrianised zone from the High Street would unify the town where now there is a very unhealthy demarcation at this point, and which risks being further enforced by this plan.

A year ago, the town was defended at this point against the rioting mob, leaving West Croydon and London Road abandoned to the mob. That abandonment continues today, risking alienating people living north of West Croydon.

After the riots, this area deserved better from the Greater London Authority and Croydon Council, who as Thursday night’s announcement on business rates relief demonstrated yet again, seem determined to divert the Mayor’s post-riot funds to East Croydon, and away from the riot-hit areas.

4 Responses to Boris’s cunning plan: too high, too many, too central