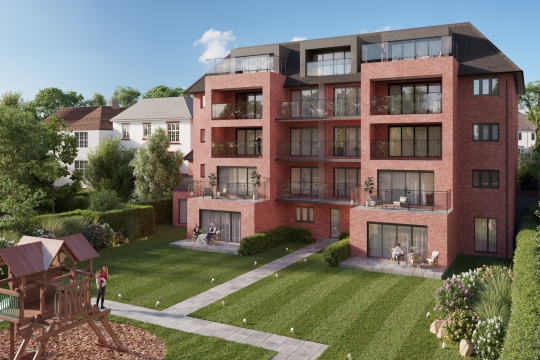 The latest Croydon carbuncle: this one is an architect’s take on a block of 18 flats proposed for Mitchley Avenue

Another day, another Croydon carbuncle.

This time it is a block of 18 flats in a gargantuan five-storey block plonked between the suburban detached houses of Mitchley Avenue, Riddlesdown, as proposed by Vita Homes.

Just look at all that glass at the back of the building, illustrated so lovingly in the CGI images on the developers’ website.

According to one concerned neighbour, “A number of hideous black and white constructions have been built in the last couple of years between Riddlesdown Road and Riddlesdown Avenue.

“Sadly few residents have been paying much attention to this as they were houses rather than flats. So they missed the point that this was establishing the practice of backfilling gardens.” 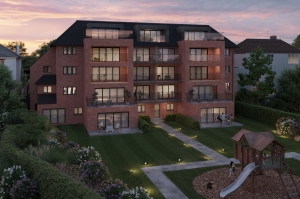 It doesn’t look any better after dark, either…

Nearby, Oakwood Avenue has another proposal for eight semi-detached houses from Aventier, one of the council’s planning department’s favourite developers.

“The message is clear,” says the concerned resident. “Backfilling of gardens with semi-detached properties is the compromise solution.

“It seems Croydon Council would be more to happy to allow this to happen. Or are developers realising the borough is becoming flat saturated?”

News, views and analysis about the people of Croydon, their lives and political times in the diverse and most-populated borough in London. Based in Croydon and edited by Steven Downes. To contact us, please email inside.croydon@btinternet.com
View all posts by insidecroydon →
This entry was posted in Housing, Planning, Sanderstead and tagged Aventier, Croydon, Croydon Council, Purley, Riddlesdown, Sanderstead. Bookmark the permalink.

2 Responses to The latest Croydon carbuncle: Riddlesdown’s own glasshouse